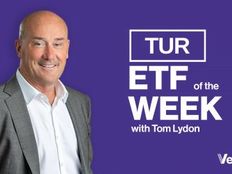 Lydon noted that 2022 was a disappointing year for both equities and fixed income. “However, there were a couple bright lights, and one, surprisingly, was this ETF,” Lydon said. TUR was a up a whopping 90% despite some wild headwinds, notably the strength of the U.S. dollar weighing down on it. “It’s just amazing that the local Turkey market did really, really well during this period of time.”

Turkey does not have many publicly traded companies, and the 50 companies in this fund largely focus on industrials and materials, which tend to perform well in times of high inflation. Lydon expressed belief that just because emerging markets are down, it doesn’t mean that investors should avoid looking at other parts of the world going into 2023. He noted that, despite great valuations, developed nations have struggled because their economies have been down. “Keep your eyes open, keep open minded, because there are going to be areas of the world that are surprisingly going to gain some momentum,” Lydon cautioned.

Jaffe observed that TUR is more than 20% over its moving average, leading to questions of whether or not it will face some sort of correction. Out of all the non-leveraged ETFs out there, TUR performed the best, but Lydon doesn’t think that investors should necessarily pour money into it right now. He urged investors to think about which areas of the world have been hammered and to begin some kind of trend-following strategy. “You could put something like this to work and buy some fairly risky areas.”

There are plenty of valuations 60%–80% off their marks from a year ago, leading to lots of opportunities. “Choice sometimes provides confusion,” Lydon said.

Asked if the strength of the recent performance of the fund is truly something that should caution investors, Lydon admitted, “The honest answer is you don’t know. This ETF could double again in 2023.” He added that TUR remains inexpensive and is still trading at a 50% discount. “It’s had a great run, but I couldn’t guess what 2023 is going to bring.” He proffered that some areas that have been hammered — whether they are China stocks, innovative technology, or internet stocks — are not going away and are worth thinking about.