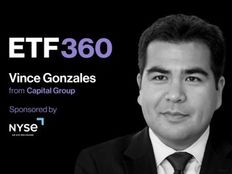 In the most recent episode of “ETF 360,” VettaFi head of research Todd Rosenbluth was joined by Capital Group’s Vince Gonzales to discuss the Capital Group Short Duration Income ETF (CGSD ).

After launching their first 6 ETFs back on February 22nd, 2022, Capital Group launched 3 fixed income ETFs in October. In just over 9 months, despite a challenging market, the 9 ETFs have managed to rack up over $5 billion in AUM. “We’re quite pleased with that progress so far,” Gonzales said, continuing, “we’re able to provide a highly complimentary suite of offerings to our investors for whatever their goals might be in fixed income.”

CGSD rounds out Capital Group’s short duration bond offerings, providing a compelling value proposition to investors, according to Gonzales. He said, “we are able to provide a combination of quality, diversification, and active attractive income with very low interest rate sensitivity.” The fund currently yields about 6% with less than two years in duration. Gonzales offered that this is about 150 basis points above the Barclay Agg which less interest rate risk.