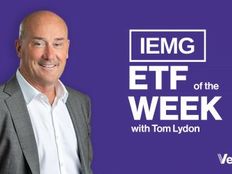 ETF of the Week: IEMG

“It is, hands down, a time to consider emerging markets,” Lydon implored. Investors don’t want to buy at the top, nor do they want to sell when funds are low. An ideal time to buy is after a stock or fund has had a major decline and moved above its long-term trend, according to Lydon. Lydon noted that the 200-day moving average for IEMG is “telling us that emerging markets, from a technical standpoint, is back.”

Part of this is due to China’s recovery, but the technical numbers on many of IEMG’s holdings show plenty of reason to be optimistic about the fund. Lydon also thinks that diversification remains a critical consideration and that not enough investors have diversified out into emerging markets. Even investors who do have emerging markets allocations frequently don’t have enough allocated there. “In the past 10 years, U.S. markets, particularly the S&P 500, has just murdered international investing. So what happens is more and more clients are saying, ‘Why are we there?’”

Jaffe noted that many investors are cautious with emerging markets, which tend to have less transparency than U.S. firms. But IEMG has plenty of big-name companies, such as Samsung and Alibaba, which should provide investors with some measure of comfort. Lydon added that MSCI “has done a really good job developing proper indexes and constructing them the right way for decades.” He thinks that even if there are a lot of firms that are under the radar in IEMG, that shouldn’t be a downside for investors, especially given the strength of MSCI’s indexing work. “I think more and more investors are trusting that,” he said.