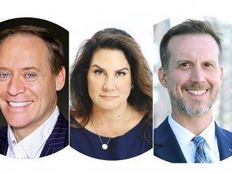 Last time I wrote about the Future of Finance session I’m wrangling at Exchange in two weeks, I introduced a core framework: We (the big we: species, country, family, and individual) have a lot of big problems to solve, many of which are too big for any one person to tackle.

And yet, trust in the institutions we rely on to get big things done is at all-time lows, and for good reason: a lot of them don’t seem to be working as intended. What kinds of institutions? Little things like “democracy,” “free markets,” and “academia.”

If that all seems a bit grandiose to tackle from the stage at Exchange, my response is, “if not us, then who?” I’ve been a lamprey on the side of the financial advisor market for long enough to realize y’all are where the future is discovered. You’re the ones out there exploring the edges of finance on behalf of your clients, helping ferry tens of trillions of assets toward destinations that match their owners’ needs and beliefs.

To tackle this foundational issue of institutional failure, I’ve convinced three of the smartest thinkers I know on the topic to spend a big chunk of the allotted 100 minutes on stage with me, helping me get smarter about the subject.

To start the process, I asked them how we ended up in this state of affairs.

Adam Butler is the CIO of ReSolve Asset Management Global. He’s a quant at heart but a big-thinking quant who I’ve known to eviscerate sacred cows from the position of someone trading these markets every single day. “The perceived institutional failures in the 1970s led to some grim, unpleasant outcomes,” he suggested. “We got, as a reaction, Reaganomics — an attempt to suggest that the reason why we haven’t been able to meet our potential is because we hadn’t unleashed the power of free markets. We saw this whole dismantling of the regulatory apparatus and neoclassical economics really coming into its own with this core idea that rational, educated actors with decent information, acting in their own self-interest, will eventually coordinate to deliver positive-sum outcomes for all of us in society.”

I admit the mere mention of “Reaganomics” caused me to react. I have, at different points in my life, held different and opposing views about “what we should do” economically. I have tried to learn to simply accept the world as it is now and let go of my preconceptions — after all, they’re not going to do anything for me.

Adam continued: “Along the way, we discovered that, actually, there are a wide variety of dynamics in a modern economy where even if you have rational actors, acting in their own self-interest, that are relatively well educated and have access to decent information, and where the economy is relatively efficient and competitive — we still as a society converge on sub-optimal states.”

But the point here is not to point fingers at the past — it’s to learn from it to better understand the now. That’s why a second critical addition to the conversation is Danielle DiMartino Booth. Danielle is the founder and CEO of Quill Intelligence and former advisor to President Richard Fisher at the Federal Reserve Bank of Dallas. She wrote a great book called “Fed Up: An Insider’s Take on Why the Federal Reserve Is Bad for America” — one guess what it’s about (I recommend the audiobook, she’s a great narrator).

Danielle isn’t here to argue about dissolving the Fed but to help us understand how groups of people all trying to do “the right thing” can become captured by perverse incentives and lead institutions, particularly within finance, into actions with unknowable long-term consequences — rarely good ones. As Danielle put it in our recent discussion group: “People had blind faith in markets until Greenspan put an asterisk on it. I was there when moral hazard was born, inside the womb, so I witnessed it. If you take interest rates to the zero bound, you may crush mobility in a country known for people moving to get better opportunities. And we’ve seen a secular decline in mobility in the post-Greenspan era.” Danielle is something of a student of these unintended consequences.

But how do we actually think about the real world problems and how we solve them? Personally, I grow weary of finger-pointing and “if only…” This is a question I regularly pose to Mike Green, PM and Chief Strategist at Simplify. “Institutions are ultimately about preserving actions that lead to our survival over a very long period of time: the institution of a nuclear family, the institution of marriage contributed to our society for a really long time. Did they become stultifying? Of course, they did — just like tax rates get too high, and then they get too low.”

If you notice some flexibility in the thinking there: welcome to the rubric for who we asked on stage for the Future of Finance panel. Continues Green: “It’s a lot easier to explain everything as a complex adaptive system: if I lower taxes and that works, it doesn’t mean that lowering taxes the next time is the right answer.”

I’ve had the privilege of being a fly on the wall for these conversations of the past little while. I hope you’ll join us at Exchange to continue the conversation. But until then, here are a few juicy tidbits just from our conversation this week:

Butler: “This all matters more than it should, because the administrative state has been eviscerated, so you don’t have a healthy tension between the institutions that are supposed to help moderate and find an equilibrium between the public sector and the private sector that meets the objectives of most people.”

DiMartino Booth: “Don’t you think in some ways that the disintegration has been filled? The vacuum has been filled by the Federal Reserve stepping in where Congress has abdicated its authority.
But it’s diminishing returns: When the pandemic hit, it took the Fed coming in with trillions of dollars equaled with fiscal coming in with trillions of dollars — to even begin to have the right effect. The Fed couldn’t come riding to the rescue by itself now, and yet it is assumed that the institution will step in where Congress falters.”

Green: “Deregulation played a really critical role in liberating resources and freeing things up on a dimension. If tax rates are too high, then lower tax rates help; if tax rates are too low, then lowering tax rates just makes the incentives even more perverse. I think a huge chunk of what we’re dealing with right now is a general lack of imagination to say that sometimes deficits do matter. Sometimes it does matter how we spend the money, we can’t just hand it back to the free market, right?”

Butler: “We have ordained the market as the solution to all problems and so now the market is expected to play a wide variety of roles for which it was never designed. Because we’ve asked free markets to do so much, we’re now in a state you could argue, since ’87 but certainly since 2000 and 2008, where we need the Fed to step in and save free markets.

We feel this need because everybody relies on them for their health insurance and for their retirement and all of these things that the market wasn’t really designed to facilitate. That creates moral hazard, but it’s this blind faith in free markets that’s kind of the original sin that’s led to a lot of the problems that we see today.”

DiMartino Booth: “Right now Congress has the first chance in a very long time to make a difference and say no more QE [quantitative easing]. I’m not saying that the interest rate policy is dead; I’m saying that maybe right now is the time to say if something has proven itself to be completely inefficient, maybe it’s time to pull the plug on it.”

Intrigued? Offended? Perplexed? Nervous? Have some priors shaken or confirmed?

I’m not claiming we’re going to solve the world’s big, intractable, combinatorially explosive problems in 100 minutes. But as far as I can tell, we as a species are the thinkiest creatures walking around the planet. If we don’t ask the big, important questions, who else will?

Come join us February 6 in Miami at the Future of Finance panel as we take this conversation to the next level. You can register here

Dave can be found on Twitter and LinkedIn at @DaveNadig