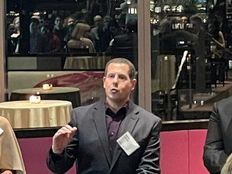 SPY Led the Way to the Democratization of Investments

“This invention democratized ETFs like nothing else,” Thompson said, while Yones marveled at the ability of SPY to serve both massive institutions and low-end individual investors living paycheck to paycheck.

In his first statement of the evening, Browne remarked, “I have the vantage of seeing the genesis of the ETF.” He sees ETFs as the perfect tool to allow households to express their views in the market. “We have given investors the power in their own hands to make choices,” Browne said, noting how investors return to SPY when the markets go south, using it as a hedging vehicle, returning to the origin of the wrapper when seeking a ballast in turbulent times.

Thompson noted that though 2022 was rough all around, the success of ETFs in terms of flows was impossible to ignore. Mutual funds left investors with both huge losses and tax hits, driving many to sell out of their positions, take the loss, and move their money over to ETFs. According to Yones, “You have these a-ha moments as an investor where you wonder, ‘What is the solution to this?’ and the solution is ETFs.” He continued, “Every asset manager needs to be asking themselves right now: If I’m not in ETFs, when will I be getting into ETFs?”

Participants in the marketplace are experiencing a mindset change, according to Browne. “If you look at the fixed income market, ETFs are driving structural changes for how corporate bonds are being traded.” He noted that there are numerous individual factors that have gently been pushing investors to more widely adopt ETFs as the vehicle of choice. Transparent instruments like the ETFs are significantly easier to access. Additionally, Browne sees the ability of ETFs to express viewpoints — both on the market and of their values — as critical to their success, saying, “There’s a segment of the population that hugely wants to invest along their values.”

The Future of SPY and ETFs Is More Innovation

Looking to the future, Thompson said, “I think there’s more innovation to be had.” She pointed to SPY’s origin in 1993 as being inspired by the ‘87 crash. “There is no real good alternative private equity ETF,” she offered, noting that though many people don’t see that as possible, they said the same of SPY. “You take these asset classes that are illiquid, and being able to address it creatively in an ETF can bring liquidity to what’s illiquid."

Yones added, “There’s so much white space available in the world of ETFs.” Yones also pointed to last year being the third straight year that more active ETFs launched than passive ones, projecting that ETFs will continue to lead the way in terms of transparency and liquidity. Browne concurred, pointing to how ETFs have begun to access emerging markets like Vietnam.

Asked about the challenges facing ETFs going forward, Browne said, “What keeps me up is regulatory pressures.” He sees ETFs as having worked very hard over the years to “harmonize” with rules around equities. “I look at some esoteric exchange traded notes that just scare me,” he said, continuing, “there needs to be some investor education around that.”

Yones said that education is both a big challenge and a big opportunity. ”This is one of our primary focuses at the New York Stock Exchange,” he offered, noting the recent launch of ETF Central. “The more we can educate investors, money managers, and advisors about how to use ETFs, I think that’s time well spent.”