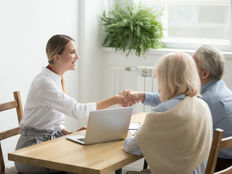 What percentage of your business are members of the Silent Generation?

Born between 1925 and 1942, there are roughly 20 million adults left in the Silent Generation. The Silent Generation, also known as the Traditionalists, control nearly $24 trillion in wealth. As you are well aware, with the huge wealth transfer we are currently in the midst of, the wealth they hold now will soon be transferred to the next generation.

The Silent Generation is touted to be the healthiest, most educated and wealthiest elder generation to have ever lived.

Seen and Not Heard

It is said that growing up, this generation was told to be “seen and not heard” as the old adage goes. Hence, tagged the Silent Generation.

They grew up during extremely difficult times, namely the Great Depression and World War II. This generation was the first to be smaller than the generation that came before them and, therefore, have been somewhat overlooked. It is said couples delayed having children during the Great Depression due to financial stresses, contributing to the low birth rate during this period. The turmoil of the war also likely contributed to low birth rates.

As they became adults during the 1950s and 1960s, America’s economy became more prosperous again. This generation also experienced higher employment rates than the prior and subsequent generations.

Work Hard and Save

The Silent Generation believes in hard work and putting in long hours. They grew up in lean times and, as a result, saved their hard-earned money.

While most living members of the Silent Generation are no longer in the workforce, prior to retiring, they were employed when lifetime pensions were still the norm. They also may have worked for the same company for their entire working career.

The Silent Generation is fiscally conservative and frugal. They value loyalty and patriotism. They love their country and truly value traditional morals and ethics.

They are civic minded and were raised to respect authority.

Working with the Silent Generation

As their name implies, they are quiet but conscientious. When it comes to their finances, they don’t want to openly discuss their money either. They may worry about their wealth transfer to their children and grandchildren.

As their advisor, be sure their will and estate plan is up to date. Lifestyle changes during retirement years may require updates. Ensure they have a durable Power of Attorney. Have they planned for elder care? As the average life expectancy continues to increase coupled with the fact they are touted to be the healthiest elder generation, longevity planning for this age group is important.

A word of caution, some members of this generation may be overly optimistic about how much they have saved for retirement. They may have underestimated their retirement expenses due to longevity, especially related to rising healthcare costs. Review their expenses, portfolio performance and withdrawals regularly.

What to Be Aware Of

Face-to-face interaction is paramount. They want to meet with you live, look you in the eyes and have personal contact with you and your office staff. Your overall approach should be much more formal with them in comparison to your other clients and prospects.

Stereotypical gender roles hold steadfast with the majority of this generation. Generally speaking, the husband is likely to be in charge of the finances and the wife may be uninvolved by choice. Be sure you find a way to connect with her, however. Statistically speaking, she will leave you after her husband dies if she doesn’t have a relationship with you.

Host generational events where your Silent Generation clients bring their children and grandchildren. Create familial experiences around holidays and important family milestones. These are also prime opportunities to build relationships with the wives who don’t want to engage in financial conversations. Instead, engage her and build your connection with her through what matters most to her – her children and grandchildren.

The Silent Generation still controls significant wealth and should not be ignored. The transfer of wealth from this generation to the next is critical to your business.

Ensure your relationships are strong. You’ve worked hard to help them build, preserve and transfer their wealth. Don’t risk losing their heirs as clients and miss important opportunities to connect with them and the next generations.