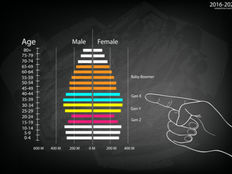 They are often overlooked. In between baby boomers and the highly talked about Millennial generation are the ignored Gen Xers.

Born between 1965 and 1980, they are frequently called the underappreciated middle child of the generations. While they currently only make up a quarter of the U.S. population, they have more spending power than any other generation, representing 31 percent of total U.S. income.

According to U.S. Census Bureau estimates, by 2028 the number of Gen Xers will exceed the baby boomer population.

How are you connecting with this generally underserved market?

First, you must understand their values. Most Gen Xers hold strong family values and strive to achieve work-life balance. They are often described as resourceful, entrepreneurial, independent, self-sufficient, individualistic, self-reliant and skeptical.

As with any generational traits, there are exceptions. Early Gen Xers hold some of the values more true to baby boomers, while late Gen Xers hold traits that are more Millennial-like.

Regardless, their values were likely impacted by the shift in society during their youth. Generation X was sometimes called the “latch-key generation,” as many of them came home to an empty house after school due to the increase of dual-income families. Many learned to be independent at an early age and manage their time, doing their homework and often cooking their own dinner.

For entertainment, they were the first generation to play video games and also labeled the “MTV generation” with the launch of MTV in 1981.

Gen Xers were the first generation to be introduced to twenty-four-hour news coverage with the founding of CNN in 1980. They watched numerous scandals unfold and major institutions be called into question. They also remember the introduction of the personal computer. They saw the emergence of of the internet and the burst of the tech bubble.

Be genuine, natural and authentic in your approach when working with Generation X. Transparency will go far with them. Since family values are of utmost importance, so is security. Keep this in mind when helping them build their financial plan.

Autonomy is also important to Gen Xers, so they do tend to have issues with authority. Avoid an approach that may be deemed as authoritative. They believe respect must be earned and that your experience is important. Once you have earned their respect, they will trust you.

They don’t like feeling trapped and like to accomplish things on their own terms, so a coaching approach that provides them with choices they can research on their own is a solid tactic. They prefer to be part of the process and value a partnership with you.

Since they tend to be skeptical, provide them with third-party proof and data for any new ideas you present to them.

Personal connections are valued among Gen Xers. They appreciate personal stories you share with them that demonstrate the importance of your relationship.

Given that Gen Xers were the first to grow up with computers and the internet, technology and internet research is very much a part of their lives. However, some older, more traditional marketing methods will still play well with Gen X.

They regularly check email, so email campaigns and e-newsletters will reach them. Gen Xers also still check their actual mailbox every day and value traditional snail mail. They may still respond to direct-mail marketing and will appreciate hard-copy invitations to events you host versus just sending electronic invites. They also still value the power of a handwritten note. Sending personalized birthday, anniversary and holiday cards are effective with this generation.

Since 45.7 million Gen Xers use social media, having a social media presence is imperative.3 And it goes without saying, a strong website is crucial too. They gravitate toward informational pieces, such as blogs and videos.

Remember that Gen Xers are busy. Many of them juggle their careers, while taking care of both their children and their aging parents. Consider hosting webinars and utilizing video conferencing to meet with them. Although they are busy, they will make time for webinar topics that are pertinent to their lives and families. They also appreciate your flexibility of offering different ways to connect with them when in-person meetings don’t fit into their hectic schedules.

Although this generation doesn’t generate the same attention as the boomers or Millennials, they are still very much worth your time and attention. The oldest Gen Xers are currently in their early fifties and will continue to need you in the years ahead, especially as they approach their retirement years.

They also will be inheriting the wealth of your boomer clients and have children who are of the popular Millennial generation or the up-and-coming Gen Z. Multi-generational planning is paramount to the future of your business, so keep your ties strong to the Gen Xers.