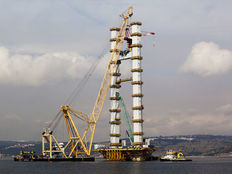 All Signs Point to an Energy Sector Rebound

The energy markets are notoriously difficult to predict with hedge funds having lost billions betting on crude oil and natural gas.

That said, there are many signs that 2017 could be the beginning of an energy bull market with crude oil production cuts, pro-energy economic policies, and a drawdown of crude oil inventories moving into 2017 and beyond. Investors may want to consider building exposure into their portfolios to capitalize on these dynamics.

In this article, we will look at several reasons why the energy sector may be due for a rebound and the best ways to build exposure into your portfolio.

Crude oil has experienced a chronic oversupply over the past two years, thanks to OPEC’s efforts to starve shale producers in the United States. Consequently, the commodity’s price has plummeted from over $100 per barrel in mid-2014 to nearly $30 per barrel by early-2016. Many U.S. energy companies have struggled in the interim – with over 60 bankruptcies in the space – but even OPEC members like Venezuela have been pushed to the brink of collapse.

On November 30, 2016, members of the oil producers’ cartel promised to reduce global oil production by 1.2 million barrels per day (b/d) for the first time since 2008 so long as non-OPEC countries agreed to a 600,000 b/d cut. Crude oil prices rallied above the $50 per barrel mark for the first time in over a year – partially because an agreement was deemed unlikely and partially because it could mark an end to the two-year supply glut.

The agreement may experience some trouble with countries like Iran and Iraq, but the largest member (Saudi Arabia) has a strong vested interest in higher prices. The country plans to partially privatize Saudi Aramco to focus on modernizing its economy and reducing dependence on crude oil prices. And, of course, Saudi Aramco’s value in the eyes of investors depends largely on the price of crude oil that dictates its revenue and profits.

The biggest question mark when it comes to crude oil supply is domestic crude oil production. Production costs have decreased over time for these producers, but many smaller players were built for higher prices and continue to come offline at $50 per barrel prices. These producers are likely to cap the rise in oil prices at some point, but it may take time for the production to come back online and make up the difference.

Crude oil inventories have been building up for the past three years amid the oversupply, but the pace of inventory builds is expected to slow. According to the EIA, global liquid fuel inventory builds averaged 0.9 million b/d in 2016, and will fall to 0.3 million b/d in 2017, before reversing to a draw of 0.1 million b/d by the second half of 2018. The agency predicts that U.S. production will limit price appreciation in 2017, but expects upward pressure in mid-2018.

In the U.S., the election of Donald Trump as president of the United States could also have an impact on crude oil demand. Mr. Trump opposes Mr. Obama’s Clean Power Plan and threatened to leave the Paris Climate Accord, while he’s widely expected to reduce subsidies for alternative energies and approve the Keystone XL pipeline. This could increase crude oil demand by making alternative energies less attractive and improving export capabilities.

A Reuters poll estimated that Brent and U.S. WTI crude oil prices would average $57.01 and $55.23 per barrel in 2017, respectively, which is in-line with the EIA’s forecast of less than $60 per barrel. However, some analysts are significantly more bullish on crude oil prices moving into the new year. Bank of America Merrill Lynch, for example, predicts that crude oil prices will reach $69 per barrel by mid-2017, due to slowdowns in oil and gas investments.

How to Invest in Higher Prices

There are several ways that investors can build energy exposure into their portfolios, but energy ETFs are the easiest options.

Some of the most popular energy ETFs include:

Investors should carefully consider their desired exposure to crude oil prices and each fund’s expense ratio and liquidity before investing. For example, the United States Oil Fund (USO B) holds near-month NYMEX futures contracts on WTI crude oil providing direct exposure to the commodity, while the Energy Select SPDR Fund (XLE A) holds a diversified portfolio of nearly 40 companies operating in the energy sector.

Screen for energy ETFs based on dividends and other factors using the ETF Analyzer tool.