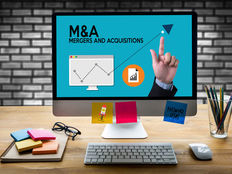 The Rise of M&A ETFs: A Strong Signal the Bull Market Is Ending

While 2015 was a record year for mergers and acquisitions (M&As), 2016 is shaping up to be a year of broken deals, as concerns over regulatory uncertainty and tax risks factored into the decision-making of top executives.

Britain’s shocking decision to leave the European Union, and the long-winded ordeal needed to formalize the divorce, certainly didn’t help. Donald Trump’s election victory has also stoked fears that the new president would block big-name acquisitions for the sake of competitiveness.

Despite political uncertainty, the appetite for M&As is stronger than ever, as businesses look to expand their reach across the globe.

Although 2016 has witnessed several failed merger attempts, the tide appears to have shifted in the fourth quarter after Qualcomm Inc. bought NXP Semiconductors for $39 billion. That merger helped push U.S. announced deal volume to a new monthly record of $248.9 billion in November.

From the perspective of companies, there are many reasons to get involved in a merger, such as increasing synergy by combining business activities, achieving greater diversification and eliminating competition. M&As are usually funded in three ways: debt, stock and cash. Each of these funding mechanisms offers huge advantages in the current environment of ultra loss monetary policy, which has helped equity markets achieve record high valuations. Many of these companies are sitting on hordes of cash that could be used to fund strategic acquisitions. For example, the following five companies in the S&P 500 – Apple, Microsoft, Alphabet, Cisco and Oracle – had a total of $504 billion in cash at the end of 2015.

M&A Activity Is a Leading Indicator

However, beneath the drive toward bigger M&A deals is a dangerous cocktail of forces that could signal the end of the bull market. The size and frequency of mergers and acquisitions are a leading indicator of credit availability and record monetary easing. At times, M&As also rise in lockstep with widespread industry deregulation, like the kind Donald Trump is proposing for the financial and energy sectors. Above all, M&As are a good proxy for the health of the stock market. Since many M&A deals are financed with stocks, high equity values give companies the means to acquire others.

It’s therefore not surprising that M&A deals have been on the rise, especially in recent years. With equity values soaring to new records, the sharp acceleration of M&A deals may signal the end of the bull market. This point is highlighted by the fact that stocks have been on an upward trend for the past two years, despite Wall Street experiencing its biggest earnings recession since the 2009 financial crisis. How long can equity valuations defy the underlying fundamentals? That is a question many investors are trying to unravel.

From the perspective of larger companies, this bull market period has been characterized by greater cost-cutting initiatives, slowed capital expenditures, and increased stock buybacks and dividends to boost profitability. In this context, M&As are a quick way to buy growth rather than build it organically. One of the main forces behind this strategy is fear of an uncertain future. Weak global growth, political uncertainty and diverging monetary policies between the United States and the rest of the world are all feeding into risk aversion. However, an over-reliance on cost cutting has several negative side effects.

For several of these companies, the focus is no longer growing top-line revenue, but maintaining position in an increasingly competitive market. Companies that are in the financial danger zone often turn to cost cutting for survival, negating the fact that cash flow is essential for businesses to flourish. A focus on cost cutting as opposed to business growth feeds into a scarcity mindset, or the belief your situation cannot improve. The scarcity mindset and the fearful outlook that comes with it is becoming more common in the current macroeconomic environment. Therefore, protecting profits is a clearly articulated goal for major companies, as evidenced by most quarterly conference calls.

It should also be noted that, when it comes to the corporate world, bigger is not always better. Large, multinational enterprises often experience greater difficulty putting capital to work and locating opportunities that generate high returns on invested capital. Large M&A deals that see companies increase market share without really earning it offer no guarantee they will be able to maintain their dominant position. It is often said that innovation is one of the best ways to increase market share because it creates better products and services that increase customer loyalty and retention. As we’ll discuss in the final section, large M&A deals often thwart innovation for the sector or market as a whole.

The performance of M&A exchange-traded funds (ETFs) over the past five years certainly demonstrates the growing business challenges facing newly merged companies. The IQ Merger Arbitrage ETF (MNA A) has significantly underperformed the broader S&P 500 (SPY A) over the past five years. This means investors would have performed much better simply acquiring the overall market via index funds than gaining exposure to large multinational deals that have plenty of hype but much less investment appeal. Merger arbitrage is only one of a handful of hedge fund strategies that investors can utilize. For a full list of hedge fund strategies, and how best to play them, read The 10 Hedge Fund Strategy ETFs You Should Consider.

The MNA has generated a mere 15% total return over the past five years amid America’s second-longest bull market ever.

By comparison, the SPY has gained more than 70%.

Use our Head-to-Head Comparison tool to compare (MNA A) with another Merger Arbitrage ETF such as Merger ETF (MRGR A-) along several criteria, such as performance, AUM, trading volume and expenses.

Mergers and acquisitions like the ones we’ve seen over the past two years generate plenty of hype on Wall Street, and may offer several advantages for the businesses involved. However, the rising trend toward takeovers entails huge risks to the competitive environment. Companies that “buy costs” only to cut them later via leaner operations and higher productivity not only reduce competitiveness, but may also lead to higher unemployment as lower-skilled workers are displaced. This could impact everything from consumer confidence all the way up to economic growth, especially in societies where personal consumption is the main engine of gross domestic product.

Ultimately, economies and sectors that are dominated by massive hegemonic entities are far less conducive to entrepreneurship and small business, which are the lifeblood of many advanced and emerging societies. Without entrepreneurship, innovation can no longer be said to thrive. As the Information Technology sector has no doubt demonstrated, innovation is the key to prosperity. It creates new economies of scale, greater opportunity and more millionaires. As experts rightly say, it is better to have 100 millionaires than to have only one billionaire.

Mergers and acquisitions can play a vital role in any market economy, but they are not a quick-fix solution to the challenges of low productivity and global competitiveness. As their performance in the market clearly demonstrates, M&A plays simply don’t live up to the Wall Street hype.