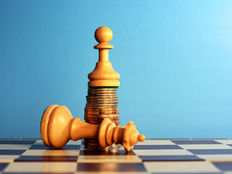 Demand for exchange-traded funds (ETFs) is expanding at a rapid pace, feeding into a multi-trillion-dollar industry whose function has grown far beyond simply tracking the largest equity indices in developed markets. Today, ETFs account for a major portion of trading volume in North American exchanges. While this has created intense competition among asset providers, the marketplace for ETF trading has been dominated by the New York Stock Exchange (NYSE).

With over 1,500 listings and $2.3 trillion in assets, NYSE Arca is the industry leader in the ETF marketplace. It has been at the forefront of the ETF craze over the past five years, a clear sign that North America continues to dominate the market. However, NYSE Arca’s grip on the market has declined in recent months amid a series of technical glitches and growing competition from other platforms. For the first time in at least five years, the platform’s listings failed to grow from a year earlier. As a result, NYSE Arca’s share of total ETF listings declined to 75% in the first quarter of 2017 from a high of 92% in 2016.

Competition on the Rise

New competition is heating up from the likes of NASDAQ and the Bats exchange, which are attracting a greater number of defectors from the NYSE. Combined, these platforms account for roughly $200 billion in assets under management. This figure includes NASDAQ’s exchange-traded mutual funds, which the NYSE omits from its total.

A series of high-profile acquisitions are largely responsible for the growing competition inside the ETF listing space. Last year, Bats was acquired by the Chicago Board Options Exchange (CBOE) for $3.2 billion. CBOE enjoys an exclusive licensing deal on the Standard & Poor’s 500 Index options contract through 2032. It also has the rights on volatility trading through an exclusive deal with the VIX. Bats became the second-largest U.S. stock exchange operator in 2014 after merging with Direct Edge.

Meanwhile, NASDAQ has also been in expansion mode with a recent purchase of the Deutsche Borse Group-owned International Securities Exchange. The deal, which was valued at $1.1 billion, gave NASDAQ access to major options trading venues.

A growing number of ETFs are turning away from the NYSE in favor of Bats and the NASDAQ. While the latter two platforms have plenty to offer, the latest exodus was driven by a series of unfortunate events at the NYSE. Botched software upgrades and a series of technical glitches have raised red flags about NYSE Arca’s execution and reliability.

The latest technical hiccup occurred in March, where 341 securities failed to complete their closing auction, which is held in the final minutes of the trading day. The closing auction is crucial because it determines the daily settlement price for each ETF.

The NYSE was also the source of anxiety in 2015 when technical issues halted trading on the Arca platform for more than three hours. Intercontinental Exchange, the parent company of NYSE, revealed earlier this year that U.S. regulators had recommended filing civil charges against the operator for this crucial misstep.

These technical malfunctions resulted in investors paying more for assets than they otherwise might have. Although the NYSE used a backup method for determining the end-of-day price in the most recent glitch, investors were left in a state of confusion, with many scrambling in the final minutes to execute their trades by other means.

For the NYSE, these glitches have damaged its reputation and opened the doors to its competition to capitalize on the promise of faster and more reliable trading. More than 30 ETFs defected from the No. 1 platform in December, including some of the NYSE’s top ETFs. The recent string of defections include the multi-billion ProShares S&P 500 Dividend Aristocrats (NOBL A), which found a new home on the Bats exchange. The defection of NOBL was a major heist for Bats, which has seen strong trading volume across all four of its platforms.

Use our ETF Screener tool to filter through the entire ETF universe, including those issued by ProShares. The Screener allows investors to filter by dozens of criteria, such as asset class, sector, region, expense ratio and historical performance.

Read 6 Best Practices for Executing ETF Orders to ensure that the quality of your trade execution remains top notch.

Technical glitches aren’t the only reason why ETF issuers are defecting. After all, a total of 56 ETFs switched from NYSE Arca to NASDAQ or Bats in 2016 – up from just 23 the previous year. By comparison, only one listing switched from Nasdaq to NYSE in 2016.

Cheap (and, in some cases, free) listings, favorable advertising opportunities and monetary incentives for issuers are all boosting foot traffic for alternative platforms like Bats and NASDAQ. Bats has implemented a highly competitive incentive program that rewards ETF issuers for their product’s success with a rebate based on Consolidated Average Daily Trading Volume (CADV). Bats allows issuers to raise trading fees as volumes increase, giving them more opportunity to boost revenue. The platform has also cut listing fees and is boosting competitive liquidity standards in less actively traded markets. This could be a potentially huge draw for listings, which make their money on increased trading activity.

One of NASDAQ’s biggest draws is its huge electronic billboard in Times Square, which it avails to ETF issuers that migrate to its platform. The digital behemoth is a Times Square icon that draws attention from all around the world. For ETF issuers looking to expand their market, airspace in Times Square is icing on the cake.

Growing Competition: A Boon for Investors

While NYSE Arca remains the undisputed leader of the ETF space, a steady rise in defections to Bats and NASDAQ is quickly shifting the landscape toward the competitors, who offer cheaper listings, favorable advertising opportunities and monetary incentives for issuers that achieve certain trading volume.

For investors, growing competition in the ETF platform space will have a positive impact on market conditions. In the world of ETF investing, this means better execution speeds, greater trading sophistication, deeper liquidity and more reliable trading execution. These are essential for capital markets to function effectively.

In 2016, BlackRock Inc. moved 11 of its iShares ETFs off NYSE Arca in an effort to diversify among primary markets. Ten of those iShares funds migrated to the NASDAQ Stock Exchange, with the eleventh moving to Bats. BlackRock cited diversification as its primary motivation for the move.

By listing on multiple platforms, BlackRock is in a better position to gauge the most favorable rules for ensuring orderly trading execution and pricing of ETFs. This will encourage innovation in the ETF space and improve client experience.

The ETF market is approaching the next stage of its evolution. Investors should prepare accordingly by learning about new trading methodologies.

Active traders have embraced swing trading. Read How to Swing Trade ETFs and implement a variety of trading strategies while taking advantage of the unparalleled liquidity, ease of use and cost efficiency of ETFs.