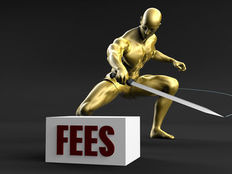 The growth and widespread adoption of exchange-traded funds (ETFs) has created intense competition among issuers, which are battling for market share in an increasingly cut-throat environment.

An escalating fee war between rival issuers has created a “race to the bottom” scenario when it comes to ETF expenses. While this outlook has played into the hands of investors, it appears to be squeezing the life out of several firms that already operate in the red.

It comes as no surprise that Vanguard, the second-largest U.S. ETF issuer, has played a leading role in the so-called fee war. Vanguard has announced large fee reductions on both ETFs and mutual funds in an effort to drive more investors to its platform. The company recently announced its third and fourth rounds of massive cuts to its entire fund lineup, which affected 150 mutual funds and ETFs, while saving investors more than $300 million. Read Vanguard Cuts ETF Expense Ratios in Waves to find out more.

The impact of the fee war can be gleaned by looking at Vanguard’s jaw-dropping growth in recent years. In 2016, the company took in $305 billion, the most ever by an asset manager. ETFs accounted for $76 billion of that total.

Vanguard isn’t the only issuer slashing its fees. BlackRock, the world’s largest asset manager, cut the fees on 15 of its iShares ETFs last October before expanding those efforts to include smart-beta assets.

Charles Schwab announced in February it would cut trading commission on ETFs as well as fees on mutual funds. The cuts applied to its standard online equity and ETF trade commissions, bringing its fees below competitors Fidelity Investment and TD Ameritrade. Fidelity and TD have both responded by jumping into the price war. Fidelity slashed stock and ETF fees this past year, while TD Ameritrade quickly followed by lowering its rates on standard online stock and ETF trading.

Reasons Why ETF Fees Are Being Cut

The ongoing fee war signals heated competition in the ETF space, as Vanguard looks to maintain its leadership pace while others look to expand their offerings. In 2016, Vanguard’s global net inflows more than doubled those of the other fund companies combined. Fidelity, Goldman Sachs, Franklin Templeton, JP Morgan, Oppenheimer, Legg Mason and John Hancock account for less than 0.01% of total ETF revenue, according to Bloomberg. As these fund managers look to gather assets and build their ETF business, lower fees will become more common.

Demand for passive, low-cost ETFs has also intensified the competition, as these assets generated record inflows in 2016. Additionally, investors trust lower-expense ratio ETFs more than higher-cost investments. This trust was broken in the 1990s and 2000s when issuers took in large inflows but failed to pass on efficiency savings to their investors.

Investors are wary of fund expense ratios in order to generate strong risk-adjusted returns over time. Being aware of risks and costs are important regardless of your ETF investing strategy. Read The Hidden Risks and Costs of ETFs to find out more.

Impact of ETF Fee War on Investors, Issuers and Industry

The fee war has direct implications on investors, issuers and the industry at large.

Intense competition in the issuer space has been a boon for investors, who now have access to a plethora of low-cost assets that can be used for diversification. As investors increasingly focus on after-cost performance, lower-cost products will remain in high demand. In today’s market, the cheapest index tracker funds appear to have the trust of the investing community. Find out the top 100 Lowest Expense Ratio ETFs here.

There’s also reason to believe that investors are demanding the same low-cost principles be applied to other ETF segments as well. The year 2016 saw more multi-factor ETFs being issued than any other strategy.

ETF issuers have benefited greatly from the growth of passive investing and have used that opportunity to build strong business models based on fees, management costs, securities lending and licensing. A combination of these business strategies has led BlackRock’s ETF unit, iShares, to a valuation of over $1 trillion.

However, in recent years we have seen a trend in which ETF issuers are expanding assets under management (AUM), but have realized low profit growth. The overall success of a fund diminishes greatly if it is unable to generate at least $100 million in AUM.

Issuers are therefore lowering fees to earn investors’ trust and build strong valuations for their funds. This environment, combined with unique offerings targeting different segments of the market, has allowed small issuers to proliferate in recent years.

As competition expands from single-factor strategies to multi-factor and smart-beta investments, cost savings will likely follow for these investments. Vanguard’s recent entrance into this space is expected to get the ball rolling.

However, a major impact of increased competition is a growing number of ETF closures, as fund managers discontinue or merge underperforming assets. Read ETF Closures: How to Manage and Avoid Them to learn more.

Implications for the ETF Industry

Increased competition among issuers has driven massive growth in the ETF industry. Global ETF assets are expected to more than double by 2021, reaching at least $7 trillion, according to PricewaterhouseCoopers. Recent trends also show a large increase in ETF flows at the expense of mutual funds.

In 2016, 85% of asset inflows from mutual funds into ETFs were in assets with expense ratios of nine basis points or less. This trend accelerated recently after the Labor Department implemented a new fiduciary rule for financial advisors. Lower commissions are also driving investors away from mutual funds and toward ETFs. The inability of active managers to outperform indices has accelerated this trend.

Intense ETF competition could hasten the transition from mutual funds to ETFs over the next decade. As investors place a premium on diversification, ETFs will continue to offer value at a tactical level. Find ETF alternatives to traditional actively-managed mutual funds using ETFdb.com’s Mutual Fund to ETF Converter tool.

Although these factors point to the continued success of the ETF industry, issuers face challenges translating AUM into profit. Aside from BlackRock, which continues to rake in about half the annual ETF revenue, profitability is proving harder to come by as firms slash fees. Vanguard, which has been among the most aggressive cost cutter, ranks a distant third in terms of revenue.

In addition to the above, the fee war will have direct implications on investors, issuers and the broader industry in at least four other ways.

The Rise of More Multi-Factor ETFs

The ETF industry’s evolving price war will likely be a boon for investors in the short term, but could have broader, less predictable implications on the market over the next ten years. One thing is certain: the price war is accelerating as issuers look to consolidate their presence in this rapidly expanding industry.

After Wholesale Prices Rise, a Fall From Stocks

Block Is Crypto-Correlated, but There’s Nuance There

In 2023, Smaller Retail Investors Could Propel These Big ETFS