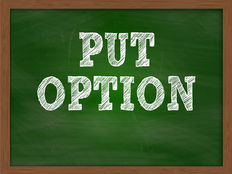 When using options to generate additional income, covered calls tend to get utilized more often that not. A less frequently employed strategy, but one that can be just as effective, is using puts to accomplish the same goal. Traders using puts are essentially hoping that share prices will remain flat or go down, but expose themselves to potentially unlimited losses using certain put-option strategies.

A put option gives the holder the right to sell 100 shares of a security at a given price, known as the strike price, over a given period of time. Put options increase in value when the price of the underlying goes down, since it allows the holder to sell shares at a higher price than what is available in the market. Selling put options to other traders can be a good way to generate a synthetic monthly income from the premiums received.

For additional income, check out a list of the top dividend ETFs using our ETF Screener.

To find out more, check out our intro article on earning income with ETF options.

The simplest form of generating options income using puts is the naked put strategy. This involves selling a put option and collecting the premium.

For example, a trader sells 10 put options with a strike price of $70 for a $4 premium. The trader nets $4000 on the trade (1000 shares at $4) if the price of the underlying remains at $70 or above at expiration, since the option would expire worthless. The trader breaks even at $66 since the loss on the stock would be offset by the premium received. The trader loses if the price drops below $66.

Another trade using put options is the covered put strategy. This involves selling a put option while simultaneously taking a short position in the underlying security. It’s a bearish strategy that profits if the underlying share price drops but loses if the price rises.

For more strategies, come back to our ETF trading strategies category page on a regular basis.

Astute observers will recognize that the profit/loss grids for covered calls and naked puts are identical. It could easily be assumed that the two strategies are essentially interchangeable, but there are some instances in which you may want to choose one over the other.

Writing naked puts may require less capital to implement. Some brokers require sufficient cash (cash secured put) in your brokerage account before allowing a naked put since you would need to buy the underlying shares should the contract get exercised, but that’s not always the case. Covered calls require ownership of the underlying shares, which could tie up thousands of dollars. A naked put would actually gain the investor cash via the option premium received. Since writing a naked put is one transaction and a covered call position requires two transactions, the naked put may ultimately cost less to implement.

Many traders use technical indicators such as the Bollinger Bands or the Relative Strength Indicator (RSI) to try to forecast the future movement of share prices. It’s theorized that looking at past share price movements and volume can help direct investors as to where prices may be headed next.

One such indicator is the Stochastic Oscillator. This indicator compares the most recent share price of a security to the share price’s trading range over a given time frame (14 days is frequently used). Like the RSI, the Stochastic Oscillator falls onto a 0-100 scale where a value of 20 or less suggests the security is oversold. A value of 80 or more indicates that the security is overbought. Put writing is a bullish strategy (although a covered put strategy is bearish), so traders would want to sell puts when the indicator approaches a reading of 20 and buy puts when the indicator is closer to 80.

Writing put options, especially naked puts, is sometimes considered a dangerous strategy, but the profit/loss profile is exactly the same as the commonly used covered call strategy. Investors may choose one method or the other depending upon their personal circumstances, but both are great ways to improve portfolio income if implemented correctly. Technical analysis may help aid in deciding the right time to employ a put writing strategy.

Further Reading
To learn more about specific options trading strategies, check out the rest of our ETF Options Income Series: