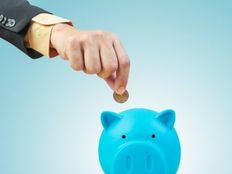 There are banks and then there are BANKS. In this case we are talking about the largest “too big to fail” institutions. Financial firms like CitiGroup (C), J.P. Morgan (JPM) and Bank of America (BAC) come to mind. These behemoths represent some of the largest financial firms on the planet, holding billions of dollars worth of assets and with their hands in a variety of banking subsectors, from loans and savings accounts, to hedge funds and trading desks.

And while it may seem like a good idea to bet on the megabanks, given their size, there are plenty of reasons why you may not want to.

With that in mind, there are ways to bet on the financial sector without holding behemoths like Bank of America or Wells Fargo (WFC).

Why Avoid the Megabanks?

“Too big to fail” may actually mean “too big to succeed.” The megabank model may finally be starting to get a tad outdated. Like the oil and gas industry, deregulation made it easy for banks to cobble together a variety of businesses. That created today’s megabanks. The problem is, growth is starting to become elusive.

While the Frank-Dodd regulation is partly to blame, the megabanks are finding it harder to keep moving the needle enough to please investors. When you operate 5,000 different subsidiaries, keeping them all profitable and moving in the same direction becomes a daunting task. Smaller, more focused rivals have been able to swoop in and cater to certain niches. These include middle-market lending, mezzanine debt, trading loan portfolios and inventory/merchandise financing. Those niches have been some of the most profitable in the financial sector.

And the assets they do hold are hard to value. The megabanks are called “black-box financials” for a reason. Because we aren’t just looking at deposits on hand, it’s hard to gauge just what the largest banks are worth. CDOs, CLOs, and mortgage-backed securities, for example, still dominate many megabank portfolios. These illiquid assets make buying the megabanks at a safe margin difficult for most investors.

The efforts to keep them safe will continue to crimp earnings as well. Since the banks had a major hand in the financial crisis back in 2008, Frank-Dodd significantly limits their activities now. It also raised the capital requirements, meaning many of the megabanks are forced to keep more cash on hand, rather than use it for investment activities. And the hits keep coming. Since such banks still have huge systematic risks, several senators from both sides of the aisle have recently made inroads into creating new rounds of legislation. The idea is to punish the megabanks in times of crisis or prevent another “too big to fail” financial crisis from happening in the first place.

All of these minuses for the megabank look especially strong when comparing them to smaller regional or community banks that don’t have many of these headaches. While some of their operations are touched by Frank-Dodd, many regional and community banks still practice the tried and true core of banking: taking deposits and making loans. Further, these banks aren’t large enough to be considered systematic risks and are targets for government sponsored break ups.

And investors seem to agree. Many of the indexes tracking these smaller banks have gone on to beat the megabanks since the end of the financial credit crisis. Over the last five years, the S&P Regional Banks Select Industry Index has managed to outperform the megabank dominated S&P 500 Financial Index by 3%.

Regional banks could be considered the mid-tier of the banking world. Smaller than the megabanks, which operate across the country or even internationally, regionals tend to stick to one area of the country, the Midwest for example. KRE tracks the performance of the S&P Regional Banks Select Industry Index, an equally weighted index of 94 different regional banks. By betting on the regional banks, investors aren’t subject to many of the “too big to fail” risks or regulations. At the same time, these banks are still big enough to survive major downturns, and they are faster growing than their larger rivals, with many moving into additional banking/investment services. Like mid-cap stocks, the middle is the sweet spot.

Community banks are defined differently depending on who’s doing the defining. But one thing they all have in common is that at most, they are limited to a single state. Some community banks may be as small as a single bank branch. QABA tracks the NASDAQ OMX® ABA Community Bank Index. The index includes 359 holdings and is a market capitalization-weighted index. It excludes the 50 largest community banks or thrifts based on asset size as defined by FDIC. Now, there is some overlap with the previously mentioned KRE, but QABA isn’t equally weighted and includes smaller names as it solely tracks those firms on the NASDAQ.

The megabanks are some of the largest stocks on the planet, so it makes sense that small-cap bank stocks would be so far removed from the risks associated with them. PSCF looks at all the financial firms in the S&P 600 Index. This includes a 48% weighting to banks, thrifts and consumer finance firms. The rest is made up of REITs and insurance firms. While it’s not 100% a banking play, it still does a good job of avoiding the megabank risks.

The growth of megabanks is being hampered by regulation and sheer size. As such, it could be time for investors to ditch them and focus on smaller banking players. The previous three plays, KRE, QABA and PSCF, make ideal ways to bet against the big boys.

Image courtesy of FrameAngel at FreeDigitalPhotos.net

Media Pros Offer Tips on Getting Their Attention