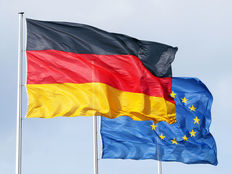 The Best ETFs to Play the German Elections
Share

The German Elections' Impact on the Eurozone

Germany heads to the polls next week in a high stakes general election that will almost assuredly see Chancellor Angela Merkel retain her post for a fourth consecutive term. The more interesting question is which party will join her conservative Christian Democrats in a coalition government, and how this partnership will influence the Eurozone in coming years.

The polls are clear: Angela Merkel will continue to run Europe’s largest economy after the September 24 election, but doing so will require another elaborate partnership in the Bundestag. Merkel’s CDU/CSU will likely have to choose between the market-friendly Free Democrats, the Greens or both. Combined, they are projected to face Social Democratic (SPD) opposition as well as other parties representing a diverse array of viewpoints and agendas.

Another possibility is maintaining the current grand coalition framework – an alliance that includes the CDU/CSU and the SPD.

The Rise of Populism

The elephant in the room is speculation that parliament will see its first far-right party in over half a century in the form of Alternative for Germany, or AfD. The AfD is Germany’s version of far-right populism – the kind that voted the United Kingdom out of the Eurozone and sent Marine Le Pen to the second round of the French presidential election. It is also Germany’s version of Geert Wilders’ PVV party, which finished second in the most recent Dutch election. AfD also represents many of the same interests as the Five Star Movement, which is determined to pry Italy from the grip of Brussels.

Clearly, something astonishing is happening throughout Europe. Proponents of strong nationalism view the recent wave of populism as an awakening, whereas its detractors see it as a preamble to fascism.

AfD is currently projected to finish third in Germany’s election. If recent polls are any indication, it can earn a double-digit percentage share of the popular vote. This certainly isn’t a stretch, given its performance in European and state elections.

Even a third place showing can have a dramatic impact on European politics. Germany wields enormous power and influence over the European Union (EU). Populism spreading to the core will only embolden other nationalist parties across the region, beginning with Italy’s Five Star Movement, which is expected to make inroads in next year’s election.

Impact of German Election on the Eurozone

Germany’s election result may have far-reaching consequences for pan-European integration, and this extends beyond the performance of AfD. While another coalition with the SPD is not the desired outcome for Merkel, it may be necessary depending on how Germans vote.

Martin Schulz, the left-leaning leader of SPD and former president of the European Parliament, will want a bigger stake in the coalition’s decision-making process. Schulz is an advocate of increased government spending on welfare and infrastructure, and has also pushed for greater EU integration. This includes a common economic and monetary union and a common European finance minister. Such a makeup would essentially remove Germany as the de facto head of the EU.

On the flipside, if the CDU/CSU retains a majority with minimal coalition partners, they will have a greater ability to fend off external demands. This will likely result in Wolfgang Schauble retaining his post as finance minister, which would mean status quo for both the EU and euro regions.

Schauble has been a key proponent of austerity, especially in relation to the never-ending Greek bailout sega. His critics argue that austerity is hampering Eurozone growth and job creation, although the opposite appears to be happening.

The Eurozone recovery has shifted into higher gear in 2017, with gross domestic product (GDP) expanding at the fastest rate in two years and unemployment falling to eight-year lows.

The euro shot up to multi-year highs against the dollar earlier this month, and is benefiting from a confluence of forces that includes stronger regional recovery and uncertainty on the U.S. policy front. The German election will have an immediate impact on the common currency as investors react to the outcome. Over the long term, the euro will be influenced by the shape of German parliament. A CDU/CSU alliance will likely encourage more responsibility at the member-state level as opposed to greater integration. This means that the gap between the Eurozone’s haves and have-nots won’t be narrowing any time soon – at least, not at the expense of Germany.

Although Germany’s election is expected to deliver a clear victory for Merkel’s camp, the devil is in the details. Her coalition partner could have a major impact on Eurozone policies.

For more ETF news and analysis, sign up for our free newsletter.