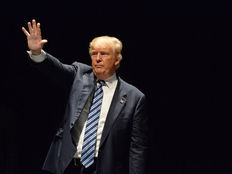 Infrastructure ETFs Are Likely to Flourish Under Trump

President Donald Trump is actually doing something very un-Republican. He’s planning on spending – big time – on a wide-sweeping platform designed to get America back into the groove. The builder of high rises, hotels and golf courses now wants to rebuild America’s crumbling infrastructure.

Fixing up America was a major campaign point for Trump. Under Trump’s plan, infrastructure stocks and exchange-traded funds (ETFs) should benefit immensely – if ‘The Donald’ is successful in implementing those plans.

It’s no secret that Trump does everything ‘big’ and this extends to his political plans.

Trump’s figure to fix infrastructure in America? A cool $500 billion.

In an interview with Fox News, Trump mentioned that he would “at least double her numbers, and you’re going to really need a lot more than that.” And that “[Hillary’s] number is a fraction of what we’re talking about. We need much more money to rebuild our infrastructure.”

Like most of Trump’s plans, his infrastructure stance is thin on details. In order to pay for the staggering sum, Trump has floated the idea of creating an infrastructure bank and selling bonds to investors in order to fund the major projects. That’s basically a mirror image of Clinton’s plan – just with larger dollar amounts.

According to the American Society of Civil Engineers, U.S. spending on needed projects is only about half of the estimated $3.3 trillion required through 2025. And if Trump is able to get that number when it comes to spending, the stocks and ETFs in the sector could really surge.

At first blush, broad-based infrastructure ETFs, such as the iShares Global Infrastructure ETF (IGF A) or SPDR S&P Global Infrastructure ETF (GII A), might make sense on a Trump win. However, both of these funds are dedicated to the owners of airports, roads and pipelines. They aren’t build-out plays. Constructing a massive project sometimes takes years before it is able to be used. That means it’ll be a while before the cash flows from these projects make their way into the hands of IGF and GII investor.

An interesting choice could be the PowerShares Dynamic Building & Construction Portfolio (PKB A). The ETF tracks a basket of firms that either produce construction materials or engage in physical construction or engineering. Currently, there are some homebuilder and home construction products included in the fund, but it also has plenty of industrial and heavy lifting holdings. It’s the closest thing investors have to a construction ETF. The fund is kind of a forgotten ETF in PowerShares line-up, but it could see renewed interest once the election takes place.

It takes a lot of materials to build-out tunnels, roads and bridges. For modern projects that includes steel – a ton of steel. The VanEck Vectors Steel ETF (SLX B+) is the only pure-play on the global steel industry. The ETF tracks the industry benchmark, the NYSE Arca Steel Index that covers 27 different global steelmakers, as well as miners of iron ore. The global steel sector has been in a funk lately, but Trump’s huge spending plan could be just what the sector needs to breakout. A broad materials fund, like the Materials Select Sector SPDR Fund (XLB A), is a more diversified way of playing the entire materials sector, not just the steel industry.

While President Trump hasn’t actually produced a real policy statement on infrastructure aside from a few sound bites, the promise of big-time spending could be a boon for those firms in the materials and construction sectors. The ETFs and stocks that track them should see higher share prices and profits as a result of the increased spending. Long term, the broader infrastructure ETFs could be real winners once the projects are completed.