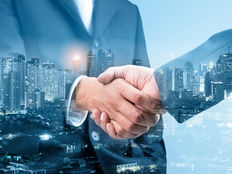 Lake Charles LNG progressing towards potential final investment decision by the end of 2022.

Russia’s invasion of Ukraine and the clear need for European countries to diversify their natural gas supplies away from Russia has dramatically improved the outlook for US LNG exports. ET is developing an LNG export facility at Lake Charles, which would be capable of exporting 16.5 million tonnes per annum (MTPA) of LNG. Lake Charles is a regasification/import terminal with an existing dock and storage capacity that can be used. For ET, a key attraction of the Lake Charles LNG project is the associated 2 billion cubic feet per day of natural gas that would flow through their pipelines to supply the facility.

ET is working on securing long-term purchase agreements for Lake Charles, having recently announced 20-year agreements with ENN Energy and ENN Natural Gas for a combined 2.7 MTPA of LNG with pricing indexed to Henry Hub with a fixed fee for liquefaction. Deliveries could begin as early as 2026. Management noted ongoing conversations with European buyers, including German utilities. Securing additional offtake agreements and selling down its equity interest in the facility will be key milestones as the project moves toward final investment decision (i.e., the point where the company commits to the project) by the end of this year. Because ET plans to sell down its equity stake in the project, ET’s portion of the project capex is expected to be measured in hundreds of millions of dollars – not billions.

ET has diversified operations across hydrocarbons (oil, natural gas, NGLs) and producing basins with 90% of the business driven by fixed fees. Management noted that current growth opportunities center around natural gas and NGLs. With mounting consensus that the Permian will need an additional natural gas pipeline sooner rather than later, ET has proposed a takeaway pipeline that would combine newbuild and existing pipeline capacity. Conversations with customers are underway, and management believes the pipeline could be completed in less than two years upon reaching final investment decision. Also in support of handling growing Permian natural gas, ET is building a new natural gas processing facility in the Midland Basin, which should be online by the end of this year. Management sees a long runway for NGL demand and is exploring opportunities that would capitalize on those trends.

ET made significant capital investments in recent years to build out large “backbone” pipelines in anticipation of a more challenging regulatory environment. These projects now generate attractive cash flows and may provide the potential for expansions as market needs arise. However, the level of investment impacted the balance sheet, and debt reduction has been a top priority. With significant free cash flow generation and progress towards a 4-4.5x debt/EBITDA ratio, management is in a position to selectively consider growth opportunities and also enhance returns to unitholders. ET increased its distribution by 15% to $0.70/unit annually with the payout made in February, and management’s goal is to get the distribution back to $1.22/unit on an annualized basis, which is where it was prior to the cut made in 2020. While ET does have an existing buyback authorization, buybacks are behind debt reduction, growth capital spending, and the distribution in the capital allocation hierarchy.

Energy Transfer has a diversified and integrated asset base across hydrocarbons and producing regions. Notable growth opportunities include Lake Charles LNG and infrastructure supporting growing Permian natural gas production, in addition to the potential for cost-efficient expansions of existing pipelines in the future. ET’s improving balance sheet is enhancing the flexibility to pursue growth projects and return cash to unitholders through the distribution.