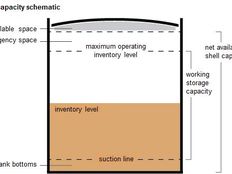 Monday Mailbag: May the 4th Be with You

Well, it’s happened. I’ve been married for two whole years as of today. Yes, we chose to get married on Star Wars Day, but it was more about the date our venue had available than our love of lightsabers.

Getting married in your thirties has its advantages, but one drawback is the massive amount of “stuff” two thirty-somethings bring to a household when they’ve each been living on their own for 10-plus years. Our attic is full and we have now succumbed to using one of the upstairs bedrooms as a “junk room”. It’s safe to say the storage levels at our house are at capacity, but is the same true for US crude oil?

Let’s take a peek at this storage tank diagram courtesy of the US Energy Information Administration (EIA).

According to the EIA’s most recent assessment, there are 521 million barrels of total working storage capacity in the US. Net available shell capacity (another frequently quoted number) includes contingency space and tank bottoms and is not part of this calculation. Evidently, contingency space is not used in the course of normal operations, but the EIA tells us that it can allow “flexibility to exceed working storage capacity without creating safety hazards or operational disruptions.” With this in mind, realize that when we review the most recent crude oil stockpiles, there’s more storage actually available than is used in the calculation.

As of April 24th, about 491 million barrels of oil were being stored in the US. That’s 94% of the capacity number mentioned above y’all. But the EIA suggests that around 120 million of these “stored” barrels are tied up in the pipelines, produced but not yet in the supply chain, or on a ship in transit from Alaska which does not take up any space in the tanks or underground caverns that make up the 521 million barrels of capacity. Removing the estimated 120 million barrels from our April 24th figure takes the utilization percentage down to a much more reasonable 71%.

Below is a chart we made to show the utilization rates in each of the five Petroleum Administration for Defense Districts (PADDs).

Capacity data compiled based on September 30, 2014 EIA Working Storage Capacity by PAD District
Total Storage Used is based on EIA Crude Oil Stock data as of April 24, 2015
*Inventory adjustments for pipeline fill, lease stocks, or oil in transit from Alaska based on correction percentages used in this EIA chart

In case you don’t have the PADDs memorized, check out this EIA map.

Cushing, Oklahoma is in PADD 2. As of April 24th, the EIA reports that the utilization rate of the 71 million barrels of storage capacity available specifically at Cushing is 87%, causing some lease rates to skyrocket to $0.80 per barrel per month from $0.20.

In the end, companies and traders must evaluate if paying storage premiums or moving their oil to a less congested PADD (and paying associated transportation costs) is worth it from a contango spread standpoint. As for the fear that storage is going to run out and oil prices are going to crash to $20, this seems to be an unlikely scenario. While Cushing may be filling up, there is still space for over 88 million barrels in PADD 3. As 2015 continues, it will be interesting to see if companies find that paying additional transportation costs to store crude in other locations is worthwhile. Similarly, it will be interesting to see if my husband notices that I am slowly sneaking boxes out of the junk room and transporting them to Goodwill.