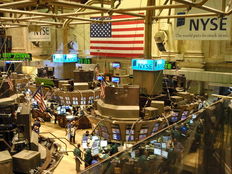 Currency-hedging has been around the ETF world for years, allowing investors to gain exposure to certain corners of the global market while curtailing FX risk. As we move into 2015, investors have begun to move more and more of their money into these products making currency-hedging one of the hottest investing styles of the year.

Though there have been a handful of currency-hedged products that have enjoyed success in the past, few were able to garner the attention and returns that the Japan Hedged Equity Fund (DXJ A-) from WisdomTree saw.

The Japanese economy has been struggling for decades now, frustrating investors hoping for a turnaround. But DXJ finally offered a way to make equity investing in Japan fruitful again. As the yen struggled, the Japanese stock market roared forward thanks to an accommodating central bank policy. Here’s what DXJ has done since the beginning of 2012:

After cultivating some mouth-watering returns, DXJ saw inflows by the billions—as well as a huge uptick in interest about its strategy. Many investors were upset that they missed out on this trend; this herd mentality accounts partially for the recent popularity in currency-hedged opportunities.

For some of last year and the better part of 2015, the biggest currency story has been the drop in the euro. The U.S. dollar continues to roar forward as its European counterpart loses steam. In fact, the EUR/USD is at its lowest level in over a decade as it slowly approaches parity. As this trend emerged, investors piled into funds like the Europe Hedged Equity Fund (HEDJ A-), which has seen an astonishing $11.5 billion worth of inflows in 2015 alone. All of this while returning more than 20% YTD.

There have certainly been other products in the currency-hedged ETF space, but these two have arguably been the biggest success stories.

At first, currency-hedging can seem like a complex strategy; the term “hedging” alone is enough to scare some investors away. But the majority of these funds operate in a relatively simple fashion—and some would argue they are even less risky than outright equity exposure to something such as a certain geographical region.

Over the same time frame that DXJ returned more than 100% for investors, its non-hedged counterpart, the Japan Large-Cap ETF (ITF A-), returned just 47% by comparison. A return of 47% in slightly over three years is nothing short of fantastic, but when compared to the 101% return from DXJ, it pales in comparison.

One of the biggest hindrances for the currency-hedged world is education; investors simply are not comfortable with the idea of hedging in their fund because it sounds intimidating on the surface. True, a currency-hedged strategy requires a bit more research from an investor’s standpoint, but it also has the potential to lower risk and in some cases improve returns over a plain-vanilla equity investment.

Investors owe it to themselves to at least explore the currency-hedged strategy in order to determine if it is an appropriate fit for their portfolios.

See also ETF Misnomers: Why You Never Judge A Fund By Its Cover.

These funds may seem a bit beyond your reach upon first glance, but a look beneath the hood reveals a potentially powerful investment tool as well as a strategy that is relatively straightforward. You can view a full list of all ETFs that currently employ currency-hedged strategies by clicking here.