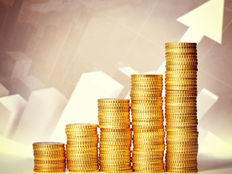 Federal Reserve Chairwoman Janet Yellen made it crystal clear in a prepared testimony to the House Financial Services Committee in mid-July that the central bank is willing to raise interest rates later this year, as long as the U.S. economy continues to improve.

In her testimony, Yellen predicted a rise in rates before the end of the year:

“If the economy evolves as we expect, economic conditions likely would make it appropriate at some point this year to raise the federal funds rate target, thereby beginning to normalize the stance of monetary policy. Indeed, most participants in June projected that an increase in the federal funds target range would likely become appropriate before year-end.”

Investors reacted by sending the U.S. dollar sharply higher and dollar-priced commodities lower. Ironically, these reactions could buy the central bank more time before raising rates, since falling commodity prices could lead to deflation and weaken the hawkish argument. The strong dollar could also hurt corporate profits – as they have started to already – and slow down the economic growth that’s necessary to justify a rate hike. Yellen seemed to have acknowledged these possibilities in her testimony:

“But let me emphasize again that these are projections based on the anticipated path of the economy, not statements of intent to raise rates at any particular time.”

Of course, the corollary to that argument is that the fall in commodity prices could relieve pressure on consumers and ultimately lead to greater economic growth, which would in turn necessitate a rate hike sooner rather than later.

Preparing for a Rate Hike

Experts may be divided on the likelihood of a rate hike this year, but that doesn’t mean that investors shouldn’t prepare for the inevitability of long-term higher rates.

The obvious play on rising interest rates is short-selling Treasury bonds, via ETFs like the Direxion Daily 20-Year Plus Treasury Bear 3x Shares ETF (TMV A), since bond prices move inversely to yields. With interest rates on the rise, Treasury yields would increase and bond prices would decrease, thereby netting profits to these types of funds. The ETF is down more than 90% since its inception (given low rates), but could be due for a rebound if they rise.

Of course, the risk with these types of leveraged ETFs is that of rates not rising as soon as expected. Investors have been betting on a rise in interest rates for some time now, but the failure for them to materialize has led to substantial losses. Over the past 52 weeks, the Direxion ETF has fallen nearly 30% amid the ongoing low-yield environment. Investors buying these funds must be exceptionally good at market timing to limit their risk. The good news is that higher interest rates tend to benefit a number of other asset classes:

There are several important risk factors to consider before implementing a strategy designed to protect a portfolio against a rate hike.

First, investors should consider the likelihood of a rate hike occurring, which may change over time depending on the unemployment rate, economic growth rates, and other factors. Investing in aggressive ETFs, like the Direxion bearish Treasuries fund, can be very costly if a rise in interest rates is delayed longer than expected. Moving into foreign stocks prematurely could also result in opportunity costs given the relatively strong performance of U.S. equities lately.

Second, investors may want to avoid certain sectors as part of their preparation for the potential for rising interest rates. For instance, long-term bond funds are almost certainly going to come off of their highs even if interest rates aren’t increased for a bit longer. Real estate investment trusts (“REITs”) and other interest rate-sensitive sectors might also become sour bets when rates begin to rise, although some of this may already be priced into these assets.

Be sure to also read Yield Curve Implications for ETF Investors.