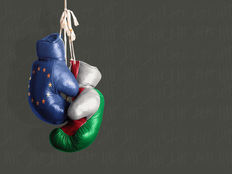 Trending: Italy's Failed Referendum Could Throw Europe Into the Abyss

This week has been all about Italy’s failed constitutional referendum, an event that has the potential to launch a chain of events leading to the breakup of the European Union. So it is no surprise to see Italy in the first spot this week. The boot is followed by oil and gas, as an unexpected deal between OPEC members sustained oil prices. Regional banks are third in the list, with Japan and mortgage-backed securities (MBS) following.

Italians voted against a reform to ditch the perfect bicameral parliamentary system, possibly paving the way for populists Movimento 5 Stelle to come to power. However, the failed vote has not triggered a sell-off, in part because the outcome was expected. Still, with a 377% rise in viewership, Italy generated the most traffic this week as the country’s stock market rallied. For example, iShares MSCI Italy Capped (EWI B+) has soared nearly 7% since the results came in this Monday, trimming year-to-date losses to 13.4%. For more ETFs with exposure to Italy, use our Country Exposure Tool here.

Just as he promised, Italy’s Prime Minister Matteo Renzi resigned on Wednesday, hours after the 2017 budget was passed. Despite stepping down, Renzi suggested he did not want to give up on politics, making available his view of the way forward. The main political parties should now discuss the formation of a coalition and continue to lead until the next elections in 2018 or, if they fail to find common ground, new elections should be held immediately after the constitutional court issues its verdict on an electoral law, he said. Renzi made clear that he is not afraid of new elections, suggesting he may indeed choose to stay and try to win a mandate from the people. He got 40% support in a referendum that was largely seen as a vote of confidence on his government.

These developments have possibly made investors optimistic about the country’s future, particularly if Italy’s next government will not be formed of populists. Optimism in the Italian banking sector, which badly needs an injection of capital, has also surged, at least judged by the equities’ performance. Intesa Sanpaolo (ISP:MIL), the healthiest bank in Italy, has jumped more than 12% since the results of the vote, while UniCredit (UCG:MIL) has increased more than 16%, although the rise could be partly attributed to a deal to sell its Pioneer Investment unit to Amundi.

Read Italy Votes ‘No’: Analyzing the Referendum for more on the referendum.

Oil and Gas in Spotlight After OPEC Deal

Oil and gas ETFs have seen their traffic surge 113% this week, as investors analyzed the implications of the surprise OPEC deal to cut supply. Oil has risen consistently since OPEC agreed to reduce production by 1.2 million barrels per day, but got a little skeptical on Wednesday, when the commodity fell. SPDR S&P Oil & Gas Exploration & Production (XOP B+) has risen more than 12% since the cartel reached a deal on November 30. On Wednesday, however, (XOP B+) lodged a 0.3% decline. For ways to invest in the oil market through ETFs, read ETFs to Play Oil’s Wild Ride.

Investors reacted to the fact that OPEC’s supply increased to record highs last month, while Russia’s production surged to its highest level in 30 years. As part of the deal, other non-OPEC members, including Russia, would cut 600,000 barrels per day. Wednesday’s fall suggests investors are getting impatient with OPEC and want to see it acting on its promises. The record production fails to soothe their concerns and skepticism is gradually creeping in. The oil prices are at record highs, and any sign OPEC will delay cutting production may trigger a sell-off.

However, the oil received good news on Wednesday from the U.S., which reported a drop in stockpiles of 2.4 million in the past week.

Read Trending: Investors Wary Ahead of Italy’s Referendum for information on the Italy’s referendum and the OPEC deal before they happened.

Regional Banks are the Surprise Winners of Trump’s Victory

Regional banks, a largely boring sector, have gained notoriety lately thanks to President-elect Donald Trump’s promise to ease regulatory burdens, and expectations of higher rates. In the past week, the sector experienced more than 112% more viewers, as an abrupt rally grabbed the headlines. For example, SPDR S&P Regional Banking ETF (KRE A-) has jumped more than 4% over the past five days alone, extending year-to-date gains to nearly 31%.

Trump’s pledge to dismantle or amend the Dodd-Frank Act along with his promise to cut taxes and boost infrastructure spending set in motion a perfect storm, favorable to regional banks. The lenders are expected to benefit not only from less red tape and an improved economy, but also from higher interest expectations. The Federal Reserve is widely anticipated to hike interest rates next month, and investors started to bet the central bank will be forced to increase rates at an accelerated pace in the year ahead.

The rally has the potential to topple previously agreed mergers between regional lenders. Already, PrivateBancorp investors have backlashed against a July agreement to sell the bank to CIBC, arguing the suitor should pay more in light of the new developments.

Japan took fourth place in our list this week with a 68% rise in traffic, as investors are assessing the country’s relationship with the new U.S. administration. Shares have rallied lately, largely due to a weaker yen and a surge by heavyweight SoftBank. Over the past five days, iShares MSCI Japan (EWJ A) has jumped 2%, extending gains since the start of the year to more than 4%.

Markets were taken by surprise on Wednesday when Softbank announced a $50 billion investment in the U.S., agreed by CEO Masayoshi Son and President-elect Trump. SoftBank Group Corp (SFTBF) rose more than 5% on the announcement.

Just as any asset class, mortgage-backed securities have been influenced by the new Trump administration in the U.S., although many are still on the fence of the ultimate effect. MBSs have seen their traffic rise 55% in the past week, while iShares MBS (MBB A) has fallen more than 2% in the past month, hurt by higher interest rates expectations.

Housing prices are expected to rise next year, but there is a big unknown stemming from Trump’s policies. On one hand, the President-elect may ease rules for banks leading to a boost in lending, propping demand for houses. On the other hand, rising interest rates may hurt demand. Many industry analysts tend to think the ultimate effect of a Trump presidency will be slightly negative.

Utilize our ETF Screener tool to filter through the entire ETF universe including mortgage-backed securities by dozens of criteria, such as asset class, sector, region, expense ratio and historical performance.

This week, Italy’s failed referendum failed to spook markets as investors pinned their hope on a potential deal between political parties to form a new coalition government following the departure of Prime Minister Renzi. The oil and gas sector was bolstered by the OPEC deal, but the market started to doubt whether the cartel will be able to cut supply as agreed on in Vienna recently. Regional banks continued their rally on a perfect storm triggered by the victory of Trump in the presidential elections, while Japan equities were boosted following a monster investment in the U.S. by SoftBank. Finally, mortgage-backed securities are expected to suffer slightly from the Trump effect.