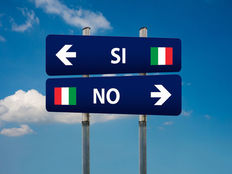 OPEC has just reached a deal to cut oil supply, surprising skeptical market watchers. The oil price rallied as a result, while energy equities’ viewership increased. European equities topped the list this week as a referendum on constitutional reform in Italy is fast approaching. Metals have taken the third place, as investors mull over Donald Trump’s infrastructure spending plans. India’s cash debacle has assured the country the fourth place on the list, while Black Friday boosted retailers.

European equities have been in the spotlight lately thanks to the upcoming referendum on constitutional reform in Italy. Their viewership has risen about 35% over the past five days. Despite a global rally in equities, Europe has underperformed lately, largely because the referendum is not expected to pass. iShares MSCI Italy Capped (EWI B+), an ETF exposed to Italian public firms, is down more than 20% since the beginning of the year; although, it has risen 4% in the past five days.

Most reliable polls show that the referendum’s intent to scrap the bicameral system – which the government argues will make it easier to pass laws – is expected to fail. Prime Minister Matteo Renzi publicly said he will resign if the referendum does not pass, likely paving the way for populists Movimento 5 Stelle (M5S) to come to power. M5S is against the European Union and has promised to hold a referendum on membership. That’s why investors are closely watching the events, as the country may be the next to exit the single bloc. More on the issue can be read in Why Italy Might Be Next to Leave the EU and 3 ETFs to Play If Italy Leaves the European Union, for an investment perspective.

The situation is quite complex, and even if Renzi loses the referendum, it’s unclear whether that means power will be grabbed by M5S. Renzi will keep leading the Democratic Party and might stage a comeback; although, most Italians view the referendum as a poll on the Prime Minister’s actions since he took power. Italians are broadly dissatisfied with Renzi’s leadership, given the high unemployment rate and stagnant economy.

OPEC has finally agreed to a supply cut in a deal that left many observers surprised. Some energy equities have been boosted as a result, and their viewership has risen by 23% since last Thursday. Energy Select Sector SPDR (XLE A) was up more than 5% in the aftermath of the news on Wednesday, bringing year-to-date gains to as much as 23%.

Over the long term, it is difficult to envision a sustained rally in oil prices given the U.S. shale boom. A potential production increase by U.S. producers is increasingly likely to take place, particularly given President-elect Donald Trump promises to ease regulatory burdens. This will continue to put pressure on oil prices.

Investors have piled into industrial metals of all sorts in the hope Donald Trump’s infrastructure plan and China will boost demand. Metals have taken the third place on the list this week with a 22% increase in traffic. PowerShares DB Base Metals (DBB A), an ETF exposed to zinc, aluminum and copper prices, has risen nearly 2% over the past five days, extending year-to-date gains to 31%.

Not all are bullish on metals. Many analysts believe the recent rally is not in line with fundamentals and is based on hope. A market correction could ensue, particularly if demand in China fails to pick up as expected. For a deeper analysis on individual ETF metals investments such as (DBB A) or (UBM A+), use our ETF Analyzer Tool. You can select ETFs by category or type, as well as add individual ticker symbols to compare performance, expenses and dividend yield among other metrics.

India’s stock markets have risen over the past week, despite fears of a cash crunch following the ban of 86% of bank notes by the government. India’s viewership has increased as much as 13% over the past week, while iShares MSCI India (INDA C+) has jumped more than 4% on bets the country will get over its cash problems. Year-to-date, (INDA C+) is still down more than 2%.

Investors believe that India will ultimately benefit from the ban given that more transactions will be made by electronic means, potentially increasing the government intake of taxes. However, the economy is expected to suffer in the short term, as many Indians defer consumption because of a lack of cash. Use our Country Exposure Tool to find ETFs with exposure to India.

Retailers have had a good month as the holiday season boosted their sales. Black Friday last week attracted more shoppers than last year, but they spent less on average. Consumer Discretionary ETFs have seen their traffic rise about 11% since last Thursday. SPDR S&P Retail (XRT B+) has dropped nearly 2% over the past five days, but remains up more than 8% over the past 30 days.

Retailers are trending for the second consecutive week. Check out the trends for the previous week, Divergence Back in Fashion as Fed Prepares Rate Hike, to see why these ETFs were popular with our readers.

Use our Head-to-Head Comparator tool to compare two ETFs such as (XRT B+) and (RTH A-) on a variety of criteria such as performance, AUM, trading volume and expenses.

Italy’s referendum and the surprise OPEC deal have attracted the most viewers this week. While European equities have underperformed on fears of Italy being the next country to leave the European Union, energy ETFs were boosted by the deal. Metals have also been in the spotlight on hopes of increasing demand from the U.S. and China. India’s cash crunch is unlikely to abate soon, but some investors see a silver lining. Finally, Black Friday attracted more shoppers this year, but they spent less on average.