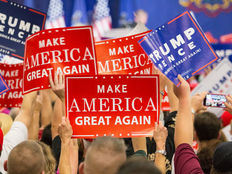 The Federal Reserve and President-elect Donald Trump have had the largest influence on trends this week. Transportation equities have taken the first spot, largely because of the impact of higher oil prices following the OPEC deal and Trump’s infrastructure plans. The yuan trended because of the potential negative effect from the Federal Reserve’s rate hike. Meanwhile, steel and steel-producing companies have had a great run since Trump was elected President, while the pharmaceutical industry was put on guard by the President-elect’s recent negative comments. Finally, Amazon was popular because of Amazon Go, a recently unveiled store with no checkout lines and no cashiers that has the potential to put millions out of their jobs.

Transportation Equities have taken first place in our list this week with a 207% rise in traffic. This category – which includes shipping companies, railroads and airlines, among others – has had reason to both cheer and be cautious about the latest outside developments. However, the companies in this category have done well broadly of late. For example, iShares Transportation Average (IYT A+) – an ETF consisting of airline firm United Continental Holdings (UAL), railroad Union Pacific (UNP) and shipping group FedEx (FDX), among others – has risen 11% since Trump’s victory in the presidential elections, more than doubling year-to-date gains to 23%.

The transportation industry thrives when fuel prices are low and the economy is booming alongside trade. A Trump presidency could have an ambivalent effect on the sector. On one hand, his pledge to clamp down on trade may hurt a broad range of transportation companies because fewer goods would be exchanged between countries, although many in the industry do not expect Trump to change trade deals dramatically. On the other hand, the President-elect’s promised pro-business reforms and infrastructure spending could bolster the industry. In particular, a promise to revive the coal industry could provide a major boost to the railroad firms.

The airline industry may be rather upset by a rise in oil prices following the OPEC deal to cut production. Oil continued its ascent this week after Saudi Arabia said it was ready to cut even more than previously agreed, while Russia also committed to pump less starting next year.

The Chinese yuan has garnered 140% more viewers over the past week compared to the previous one, as Chinese-U.S. relations stepped into the unknown with Trump being elected President. However, the Chinese currency has been depreciating lately because of a strong dollar, which strengthened on the back of higher interest rates.

For example, WisdomTree Chinese Yuan Strategy (CYB A+) has dropped 1% over the past month, extending year-to-date losses to 3.3%.

The uncertainty in the region increased after Trump said the U.S. may ditch the One China policy in order to negotiate better trade deals with the country. The Chinese government signaled that its territorial integrity was not negotiable and criticized Trump for speaking with the President of the renegade province Taiwan. Adding to uncertainty was the impeachment of South Korea’s President Park Geun-Hye over a corruption scandal. Park was accused of conspiring with her indicted friends to influence business decisions in the country. South Korea is a close U.S. ally, and one that has not been on good terms with China. A new administration is not expected to change course in the diplomatic ties between the nations.

For a full list of ETFs with exposure to China and South Korea, use our ETF Database Country Exposure tool here.

Steel has seen its viewership increase 82% this week, despite the metal breaking a rally that started when Trump won the U.S. presidential election. Over the past five days, VanEck Vectors Steel ETF (SLX B+) has dropped more than 7%, but it remains up as much as 16% since November 8. Year-to-date, the metal has lodged triple-digit gains.

Trump’s promise to rebuild America’s infrastructure has bolstered steel companies more than the metal itself, as investors expect these firms to benefit not only from higher prices but also from higher volumes sold. Furthermore, tariffs imposed on cheap Chinese steel may boost the top and the bottom lines of firms such as AK Steel (AKS) and United States Steel (X), which have soared 76% and 72%, respectively, since Trump emerged victorious.

Pharmaceutical companies’ relief after finding out that their enemy Hillary Clinton lost the U.S. election to Donald Trump may prove short-lived. The President-elect recently signaled his intent to crack down on drug prices, although he was light on details. However, the pharma industry took fourth place in our list with a 73% increase in viewership.

The sector has been among the few losers of the recent Trump-induced rally. For example, PowerShares Dynamic Pharmaceuticals (PJP B) – an ETF with exposure to the pharma’s heavyweights such as Pfizer (PFE), Allergan (AGN) and Amgen (AMGN) – has dropped more than 3% since November 9, while the S&P 500 has increased 4% over the same period, reaching record highs.

Use our Head-to-Head Comparison tool to compare two ETFs such as (PJP B) and (IHE B+) on a variety of criteria, such as performance, AUM, trading volume and expenses.

In an interview with Time magazine, Trump said he will bring down drug prices, without elaborating further. However, the remark was enough to trigger a selloff.

Online retailer Amazon (AMZN) has generated 69% more traffic this week compared to the previous one, as the company unveiled its version of a brick-and-mortar retail store. The news was enough to propel the stock higher, up more than 4% since the concept of a cashierless store was published on December 5.

The retail store concept is part of the company’s ambition to compete with traditional retailers by making the shopping experience even better than it is now. According to the concept, shoppers enter the store, take everything they want and then leave. They will be charged automatically the amount spent via the in-house-built app. The store is currently only available to Amazon employees, but the firm plans to launch its first public store in early 2017.

This week, transportation equities have been the most popular, as industry watchers are on the fence about the effects of a Trump presidency, while airliners prepare for higher oil prices. The Chinese yuan has fallen slightly lately on the back of a stronger dollar, while steel rallied on Trump’s protectionist policies and infrastructure spending boost. Pharmaceuticals are poised to suffer under Trump, if the President-elect keeps his promise of cracking down on drug prices. Finally, Amazon investors cheered the news of a cashierless brick-and-mortar store concept that has the potential to expand the company.