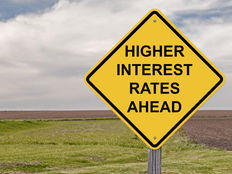 The U.S. Federal Reserve is broadly expected to make its second interest rate increase this cycle.

The market is putting a nearly 100% chance on Chair Janet Yellen announcing a hike of 25 basis points, to 0.75%, at the December 14 press conference, given her repeated remarks about the strength of the U.S. economy and the risks of financial bubbles stemming from low rates for longer periods.

Read our Rising Interest Rates section on how best to play the Federal Reserve’s decision to hike interest rates. Find out about the implications of rising interest rates as well as specific ETFs that will help you re-position your portfolio in a rising rate environment.

The Road to The Second Hike

The U.S. economy has been the fastest growing in the developed world since the financial crisis hit in 2007. However, the pace of improvement has not been nearly as strong as in past recoveries, making the Federal Reserve wary of increasing rates too fast. Over the past years, the Fed’s mantra has been that it is better to err on the upside of recovery than on the downside, setting a dovish tone throughout the entire cycle.

The Fed essentially started to tighten its monetary policy as far back as 2013 (six years after the financial crisis), yet the rates are still at record lows. The reason for this is that the central bank has been very carefully and slowly taking the pedal off the acceleration in order not to upset a fragile recovery. It first started to reduce its $85 billion asset purchase program by $10 billion a month exactly three years ago. Before that, the Fed had inundated the economy with newly minted cash to stave off a 1929-style depression.

After the Fed finished the gradual unwinding of its quantitative easing program in October 2014, the market was expecting the first hike to come relatively soon, but several risk events forced it to delay a hike by more than a year. It all started with the Greek government debt crisis in May 2015, an event that triggered a selloff in the European equities from which many countries have not yet recovered. Investors had not yet finished licking their wounds from the Greek crisis when the Chinese stock market collapsed in August, precipitating another – much more brutal – global selloff.

The Fed understood the implications and left rates unchanged. In December 2015, the central bank finally raised interest rates for the first time in this cycle and many were expecting a second hike to come in the next months. Yet, risks stemming from fears about Chinese growth, Brexit, and the U.S. presidential election determined that it, once again, postpone a hike.

On December 14, 2016, the Fed is likely to finally deliver its second hike in this cycle and leave market watchers pondering on the next increase. The central bank officials expect to make two increases in 2017, but the electing of Donald Trump to power has prompted several lawmakers to caution about an upward revision to the forecast. The dollar’s surge and the rise in bond yields suggest the market is also thinking that the Fed may accelerate its rate hike cycle. In addition, investors believe there is a 40% chance (the highest probability) for the interest rates to reach 1% next November, with the rise occurring in June.

While rising interest rates are not favoring equities, the stock market rallied in the hope President-elect Donald Trump will implement inflationary policies and trim corporate taxes. Financial institutions have been among the best performers, as they are expected to benefit both from rising interest rates and less red tape promised by Trump. For more information on how interest rates impact the financials and real estate sectors, read Interest Rates and Financial ETFs: What Investors Need to Know and Rising Interest Rates and the Agony in REIT ETFs.

The Federal Reserve has been slow to tighten monetary policy for fear of upsetting a fragile economic recovery in light of a host of external shocks. However, the central bank is now prepared to increase interest rates for the second time this cycle, and is largely expected to hike them at a faster pace in the coming period given Trump’s promise to enact inflationary policies.