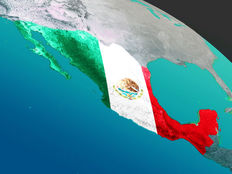 Trending: Mexico in the Spotlight as Trump Revives 'Wall' Rhetoric

This is the first edition of the trends articles for 2017, and the top themes on investors’ minds could not be more predictable. Consumer Discretionary ETFs were the most popular over the past week, as market watchers eagerly wait to see how retail sales fared during the December holiday season. Mexico has taken the second spot in the list on worries about President-elect Donald Trump reviving a campaign pledge to build a wall across the Mexican border. The Chinese yuan has been in the spotlight lately due to the government’s attempt to bolster a rapidly weakening currency, while precious metals have shown resilience in the face of rising U.S. interest rates and surging equity prices. Finally, healthcare companies have been closely watching Trump for clues about future policies. Read our previous trends piece: our last one of 2016, Trending: Fed Bolsters U.S. Dollar and Russia Cheers Trump’s Picks.

Retail ETFs have been the most popular this week with a traffic surge of 291%. Investors are clearly looking ahead for the retail data due to be released on Friday, which is expected to give an indication of how the largest retailers performed during the holiday season. SPDR S&P Retail (XRT B+) has been heading down lately, in a sign the market believes the shopping season may have been weak. (XRT B+) has dropped nearly 1 % over the past five days, and is down 6.4% for the rolling month until January 11.

The reason for at least part of the drop has been a consistent weakness in the stocks of department stores, particularly apparel retailers. For example, Macy’s (M), Kohl’s (KSS) and Sears Holdings – all part of (XRT B+) – have recently announced store closings, while the former two also issued profit warnings. The stocks of all three companies have tumbled between 20% and 30% over the past month. The environment for these companies has been very tough lately, with many predicting a secular shift of consumers away from apparel spending. Only low-cost producers such as H&M and TJX Companies (TJX) – also part of (XRT B+) – have managed to weather the storm along with high-end retailers.

Other types of retailers have benefited from a strong economy. On Friday, retail sales will show how the industry did over the holiday season. Analysts are predicting a 0.7% month-over-month rise. In November, retail sales rose just 0.1%. An upside surprise to the forecast is possible. The same store sales index compiled by Reuters registered an uptick of 2.4% in December, compared with estimates of just 1.3%.

Mexico has been one of the losers after the election of Donald Trump as the U.S. President, with its currency and stock markets tumbling on fears of worsening relations between the two countries. Mexico has seen its traffic increase 236% over the past week, largely because of the stock market’s poor performance. iShares MSCI Mexico Capped (EWW A) has dropped about 2.7% since last Thursday, extending monthly losses to nearly 10%.

Although many thought Trump’s campaign pledge to build a wall south of the border was for the purpose of winning additional votes, the President-elect reiterated his promise this week. He also said Mexico will pay for it directly or through taxes. In addition, Trump has called for an import tax on all cars produced in Mexico by American automakers and sold in the U.S., triggering a sell-off in the peso. On Wednesday, the currency hit a historic low of 22.04 against the dollar. Ford apparently caved and announced it would build a planned factory in the U.S. instead of Mexico, although the company said the move was not in reaction to Trump’s rhetoric. Fiat Chrysler also said it would build a plant in the U.S.

To easily find ETFs exposed to a particular country, check our ETF Country Exposure tool. Select a specific country and get a list of all the ETFs with exposure to your country of choice.

China has been experiencing capital outflows lately, prompting a weakening of the offshore yuan and a swift government intervention in the markets. These issues have turned investor attention to the country, which has seen its viewership rise as much as 133% over the past week. WisdomTree Chinese Yuan Strategy Fund (CYB A+) is slightly up over the past five days, but is down more than 2% over the past year.

The reason for the market intervention has been the widening gap between the onshore and offshore yuan. Last week, the offshore yuan sank to a record 2.9% discount to its onshore counterpart, spurring government to incessantly buy yuan. As a result, the overnight lending rate in the yuan spiked to a record high of 66%, catching many short sellers off balance. Rates should return to normal as soon as the central bank achieves its goal of converging the prices of the two currencies.

Precious metals have seen their traffic surge as much as 122% over the past week, as many are recovering from a bear market. Gold, silver and platinum have continued their upward ascent lately, with ETFS Physical Platinum (PPLT A-) rising more than 2% over the past five days.

The reason for the recovery in precious metals may not be due to fundamental factors, but rather because they reached a technical nadir. The broad stock market and government bond yields, which usually fall when precious metals rise, have been jumping lately.

ETFdb has ETF Investing Guides and other ebooks to help you navigate the investing landscape using ETFs. Sign up to ETF Database Pro to get access to all the PDFs located on our ETF Guides page.

Healthcare and Biotech May Struggle Under Trump

Healthcare and Biotech ETFs have taken last spot on our list with a 76% increase in viewership. During his latest conference call, President-elect Trump criticized healthcare and biotechnology companies for charging too high of prices, and he said that needs to change. His remarks sent the iShares Nasdaq Biotechnology (IBB A-) down nearly 3% on Wednesday, as investors fear the government may take measures that will hurt the industry’s profitability.

It is yet unclear how exactly Trump wants to crackdown on price gouging. He suggested that the U.S. may allow cheaper imported drugs to create competition, or give Medicaid and Medicare the possibility to negotiate prices.

Utilize our ETF Screener tool to filter through the entire ETF universe including biotechnology and healthcare ETFs by dozens of criteria such as asset class, sector, region, expense ratio and historical performance.

This week, Trump’s rhetoric has put two categories in the spotlight – Mexico and Biotechnology. The President-elect revived talks about building a wall south of the U.S. border, making investors jittery about Mexico’s prospects, and he criticized biotechnology and healthcare companies for raising drug prices. Retailers took first place because of the potential boon the businesses may have gotten from the holiday shopping season. China has been battling with capital outflows and an implicit offshore yuan depreciation, while precious metals may have finally found their nadir.