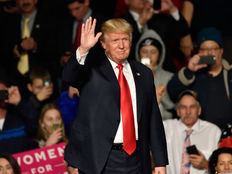 The Russian stock market has been rallying lately thanks to higher oil prices and expectations of improved relations with the U.S. Russia has taken first place on our list this week, closely followed by the U.S. dollar, which appreciated considerably on the back of a hawkish Federal Reserve. Solar energy took the third spot, while inverse bonds trended due to rising interest rates in the U.S. Finally, investors were lured by the prospects offered by the lowest P/E ratio ETFs. For more Trump-related trends, read our previous edition Trending: Transportation and Steel Industries Prepare for Trumponomics.

Russia Poised to End the Year on a High Note

After a terrible start of the year – with the stock market falling 20% in the first 20 days alone – Russia not only erased all its losses but is on track to post one of the best performances among emerging market peers. Russia has seen its traffic increase as much as 95% this past week, as higher oil prices and an expected thaw in relations with the West revived investor optimism in the country.

VanEck Vectors Russia (RSX B) has risen 41.3% since the beginning of the year, comfortably beating iShares MSCI Emerging Markets (EEM A-) by about 34 percentage points.

Two developments have contributed to such an outstanding performance. First, an OPEC deal to cut oil supply sparked investor optimism that the country’s coffers will be boosted by a higher oil price, helping arrest a recession that started at the beginning of 2015. It’s highly likely that Russia will grow in the next quarter. In the third quarter, the GDP only fell by 0.4% year-on-year, marking an improvement from a fall of 0.6% and 1.2% in the previous two quarters, respectively. Oil prices stand firm above the $50 per barrel level and are expected to increase if the OPEC countries stick to their commitment to cut 1.2 million barrels per day. Russia recently promised to join the cartel in cutting production, further boosting the country’s prospects.

Second, the election of Donald Trump as U.S. president harbingers an improvement in relations between the two countries, and Russia may even see sanctions removed. Although, Germany signaled it wanted to toughen the sanctions in light of Russia’s actions in the Syrian conflict. Trump has repeatedly said he wants to build a friendly and collaborative relationship with Russia. The appointment of Exxon CEO Rex Tillerson – a friendly figure to Russia’s President Vladimir Putin – as Secretary of State is a sign the President-elect is keeping his promise.

To easily find ETFs exposed to a particular country such as Russia, check our ETF Country Exposure tool. Select a specific country and get a list with all the ETFs with exposure to your pick.

The U.S. dollar has resumed a rally that started in 2014, boosted by the prospect of a Trump presidency and a hawkish Federal Reserve. This week, the U.S. dollar page has garnered 53% more viewers compared to the previous one, as the currency appreciated considerably. Since the rally started on November 9, the dollar (UUP B) has surged more than 4%.

The Federal Reserve recently raised interest rates to 0.75% from 0.50% in a move widely anticipated by the market. However, the dollar rallied in the aftermath of the Fed meeting because the policymakers took a more hawkish stance on the future path of interest rates than previously thought. The Fed is now expecting to increase rates three times next year instead of two, and said it may further change its view if a Trump presidency accelerates growth and inflation.

In addition, Trump’s vow to make it easier for U.S. banks to lend money and to spend as much as $1 trillion on infrastructure bolstered bets the U.S. economy will grow at an accelerated pace, which will drive up inflation and interest rates.

Solar Energy ETFs have seen their visitor traffic rise about 33% this week, as a positive research report on the industry provided some respite to the embattled industry. Guggenheim Solar (TAN C+) has risen nearly 1% since last Thursday, but the ETF remains down 42% for the year.

It’s been a tough year for solar energy companies, with SunEdison filing for bankruptcy in a high profile case and SolarCity being saved from the brink of collapse by Tesla Motors. Falling energy prices have hit not only commodity producers but also alternative energy companies. The good news for the industry as a whole is that costs to produce solar energy are dropping exponentially. A recent Bloomberg report says unsubsidized solar power costs are beginning to outperform coal and natural gas in certain emerging markets. Solar energy is also better positioned against wind power, with investments in solar panels growing at a higher pace.

Utilize our ETF Screener tool to filter through the entire ETF universe including solar energy by dozens of criteria such as asset class, sector, region, expense ratio and historical performance.

Inverse bonds have seen 27% more viewers this week, as a hawkish Federal Reserve sparked a bond selloff. ProShares UltraShort 7-10 Year Treasury (PST B+) is down more than 1% since the beginning of the year, but has recovered a great deal of lost ground since Trump won the U.S. election. Inverse bonds may have finally turned a corner after years of poor performance on the back of low interest rates.

Now that the Federal Reserve increased rates for the second time in this cycle and signaled it may hike them at a faster pace next year, investors have been pondering whether inverse bonds are a good investment.

As the year draws to an end, investors have been hunting for undervalued opportunities. 100 equity ETFs with the lowest P/E ratio have seen their viewership increase 23% this week. iShares U.S. Telecommunications (IYZ A+) is the most undervalued ETF in the space with a price-to-earnings ratio of just 4, followed by Guggenheim Shipping (SEA B) with 5.3 and VanEck Vectors Russia Small-Cap (RSXJ C) with 6.1.

A low price-to-earnings ratio may be a sign that a particular stock or industry is undervalued, or that its growth prospects are limited. Confidence could also play a role, as in the case with Russia, which gets a lower multiple because of its perceived high political risk. Some of these low P/E ratio plays could offer much higher returns than other more fairly valued ETFs, but at an increased risk.

Russia is poised to end this year on a high note after two years of suffering. The country’s stock market has rallied lately on the back of higher oil prices and positive rhetoric from President-elect Trump. The U.S. dollar has also been boosted by the upcoming Trump presidency and a hawkish Federal Reserve. Solar energy has had a bad year but the industry as a whole is booming as production costs drop steeply. Inverse bonds have started to rally on the back of expectations for higher interest rates.