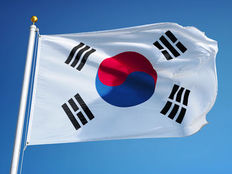 Trending: South Korea in Spotlight as President Park is Ousted

An interesting mix of topics trended this week. South Korea is a rare appearance in the list, but its presence is not incidental. The nation’s president was sacked amid massive protests and corruption charges involving Samsung, a national pension fund and top political figures. Inverse bonds took first place on the list as rising interest rates make these instruments ever more attractive. Crude oil, which has fallen out of grace with investors lately, was third on the list, followed by Brazil and European equities.

Inverse bonds have started to show some traction with investors lately, after years of being beaten up as a result of low-interest rates. Over the past week, the ETFs exposed to short bonds have seen their traffic jump more 148%. The presence of inverse bonds on our list is largely due to expectations of higher interest rates, which will drive yields across the board higher and bond prices lower.

Interest rates have finally started to pick up, with the U.S. Federal Reserve on Wednesday increasing its benchmark rate for the third time this cycle – from 0.75% to 1%. ProShares Short 20+ Year Treasury (TBF A+) was down about 1% on the Fed announcement as investors focused on the future path of rate hikes, which disappointed investors. Chair Janet Yellen said that the current rate hike is not a “reassessment” of the monetary policy and confirmed that the committee is considering another two increases this year.

This narrative surprised many analysts expecting the Fed to telegraph a total of four hikes this year, particularly given that unemployment at 4.7% and inflation at 2.1% reached the committee’s target.

Despite the setback on Wednesday, inverse bonds may continue to recover as interest rates gradually pick up. A particular boon for inverse bonds would be if U.S. President Donald Trump succeeds in implementing his fiscal stimulus plan.

South Korea Resilient in the Face of Turmoil

South Korea is a rare presence on our list, but the nation made the headlines of late with the high-profile corruption scandal involving Samsung and President Park Geun-hye. South Korea has seen its traffic rise as much as 136% over the past week. Despite the turmoil, the equity markets have been strong, with iShares MSCI South Korea Capped (EWY B) advancing 6% over the past five days and 15% year-to-date.

In an unprecedented case, a South Korean court removed Park as president after massive protests calling for her ejection. Park had first been impeached, and the next step was for the Constitutional court to approve the National Assembly’s decision, which it duly did last Friday. Now Park will be investigated for corruption charges involving bribes received by one of her closest friends in exchange for political favors.

With Park now out, it is likely that opposition leaders will emerge as the country’s leaders. Unlike their conservative predecessors, the liberals are in favor of more cooperation with the belligerent North Korea, and they signaled a desire to draw a new strategy on the issue together with the U.S. The liberals also want to ease tensions with China, which is increasingly worried about American influence in the region. North Korea has become an increasing threat lately, promising to conduct “merciless” attacks on its southern neighbor and the U.S. if joint military exercises of the two allies amount to an invasion.

The reason for the drop is clear. Inventories in the U.S. have been rising consistently for weeks as many local shale players resumed digging because prices had improved. The OPEC deal to cut supply has so far not proved enough to provide a floor above $50 per barrel. Saudi Arabia, for instance, has been extracting fewer barrels per day than agreed upon with its fellow OPEC members, and it said it will continue to do so, according to various media reports. However, this shortfall has been more than compensated by oil from other sources, including shale and Russia.

For the week ending March 10, crude oil inventories dropped by a meager 0.2 million barrels, as crude imports fell. The figures were enough to embolden bulls, sending oil prices up about 2% on Wednesday. Russia’s major oil company Rosneft recently said the U.S. fracking industry represents a menace to the OPEC deal, contending that American shale will act as a price regulator for some time.

For a deeper analysis on individual ETF investments such as (USO B) or (EWY B), use our ETF Analyzer tool. You can select ETFs by category or type as well as add individual ticker symbols to compare performance, expenses and dividend yield, among other metrics.

Brazil has seen its viewership rise 74% this week, as the country’s equities seem undervalued. iShares MSCI Brazil Capped (EWZ A-) has advanced more than 10% since the beginning of the year, and there may be more room for growth.

Lately, the country has benefited from the emergence of politicians willing to adopt market-friendly reforms and the impeachment of President Dilma Rousseff, as well as a recovery in commodity prices across the board. The oil recovery, in particular, has sent shares of national champion Petrobras up by as much as 90% over the past 12 months. To easily find ETFs exposed to a particular country such as Brazil or South Korea, use our ETF Country Exposure tool. Select a specific country and get a list of all the ETFs with exposure to your pick.

Rising interest rates in the U.S., along with another drop in crude prices, present a risk to Brazilian equities. It should be noted, however, that Brazil and emerging markets overall have been resilient in the face of higher rates in the U.S., perhaps as a result of the reflation trade.

European equities have seen their viewership increase 40% this week. The old continent is attracting interest due to the upcoming elections in France, where establishment politicians may lose to anti-EU populists. Overall, however, the continent’s equities appear undervalued compared to their American counterparts. Vanguard FTSE Europe (VGK A) has jumped nearly 2% over the past five days, extending year-to-date gains to more than 5%.

In the Netherlands, Dutch Prime Minister Mark Rutte won the elections and is on track to create a centre coalition to lead the country. Geert Wilders’ anti-immigration Freedom Party was dealt a blow, removing investors’ fears about populists taking hold of the political landscape in Europe. Next in line to take the populism test is France.

Inverse bonds were in demand this week, just as the Federal Reserve hiked interest rates for the first time this year on Wednesday to 1%. South Korea took second place on the list as the stock market proved resilient in the face of turmoil triggered by the nation’s presidential oust. Crude oil dropped below the $50-per-barrel mark on increasing stockpiles in the U.S. Finally, Brazilian and European equities trended because of their relative undervaluation.