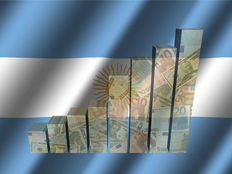 This week’s trending ETFs are centered on global markets and commodities. Argentina has drawn attention from foreign investment due to its strong government and new economic reform. Article 50 was signed on Wednesday, beginning the Brexit process. Oil supply tightened as data came in better than expected, causing oil prices to reach recent highs. Earlier this month, bottled water finally overtook soda as the most consumed beverage in the United States. Finally, the materials sector has seen a recent uptick on the EU’s approval of the Dow Chemical/DuPont merger.

This week’s biggest trending topic has been Argentina. Suffering from a poor economic history, a complicated track record of debt payments and a low credit rating, Argentina needs to do a lot to attract investors. However, since President Mauricio Macri was elected in 2015, things have begun to turn the corner. Both the country’s people and outside analysts have seen the Argentine government – which has always been a concern to maintain economic stability – grow stronger over the last two years. President Macri has also instituted economic reform, such as a tax amnesty, which has helped both governmental revenues and companies in the financial sector that received a cash influx.

With Argentina attracting more foreign direct investment, it’s also gotten the attention of stock market investors. The ETF with the most exposure to Argentinian publicly traded companies is Global X MSCI Argentina (ARGT A-). On a year-to-date basis, the ETF is up over 20% and is up over 47% over the last one year. The fund’s second-largest holding is Mercadolibre Inc. (MELI), a Buenos Aires-based e-commerce company that is up over 38% YTD. For more ETFs that invest in Mercadolibre, Inc., click here.

The second-highest jump in popularity this week was stemmed with British Prime Minister May triggering Article 50 this week. Article 50 starts the two-year process of Britain’s departure from the European Union. Since the announcement in mid-2016, the sterling plummeted 11% against the U.S. dollar and has continued to see its lowest levels since 1985. However, analysts have expectations the sterling has stabilized and it has reached the bottom now that the Brexit process is starting. For more ways to play the Brexit Negotiations, read The Best ETFs to Play the Brexit Negotiations.

For investors who want exposure to the sterling through an ETF, the Guggenheim CurrencyShares British Pound Sterling Trust ETF (FXB B) is a good option. The fund is designed to mirror the movements of the currency and is down over 12% for the trailing one year. On a year-to-date basis, the fund is up 0.97% and only down 0.21% for the week.

The demand for exposure to crude oil went up significantly this week as oil prices rose 2% on Wednesday after inventories rose less than expected. The Energy Information Administration (EIA) reported that inventories rose 867,000 barrels last week, which was nearly half the expected amount. This also caused U.S. crude futures to soar to two-week highs. This price was also supported by a reduction of Libya’s National Oil Corp of 250,000 per day. This was caused by a blockade of armed protestors in the company’s Sharara and Wafa oil fields.

With oil below $50 per barrel, investors can get exposure by investing in the United States Oil Fund ETF (USO B). The fund is down over 13% on a year-to-date basis but up 2.17% as of Wednesday’s close.

For the first time in history, bottled water surpassed carbonated soft drinks in the United States as the most consumed drink per person in 2016. The shift comes after bottled water has shown strong growth for the last decade, finally reaching 39.3 gallons per capita (versus 38.5 gallons for soda). The total bottled water volume rose 9% to 12.8 billion gallons for last year.

Most bottled water is still manufactured by most major soda companies like Coca-Cola (KO) and Pepsi (PEP). However, ETFs that invest in water companies have seen traction in the last week. Such an example is the Guggenheim S&P Global Water Index ETF (CGW A+). The fund is up 8.93% on a YTD basis and up 14.59% for the rolling one year. The fund gives investors more exposure to global water companies, instead of just U.S.-based companies.

On Monday, Dow Chemical Co. (DOW) and DuPont, Co. (DD) won approval from the European Union on a $77 billion merger. This is one of the first mega-deals that could reshape the landscape of the agrochemicals industry. The merger still needs to win approval in the United States over the next few months but based on analysts, the EU approval was the bigger of the two obstacles that needed to be passed.

With this merger news, the materials sector had a large gain this week. In particular is Materials Select Sector SPDR Fund (XLB A), which is up 1.20% for the week and up 5.70% on a year-to-date basis. Naturally, the two largest holdings in the fund are Dow Chemical Co. and DuPont, Co., which are both up over 11% YTD.

For more ETFs that invest in the materials sector, click here.

This week, Argentina ETFs trended as President Macri has instituted economic reform which has helped both governmental revenues and companies in the Argentina financial sector that received a cash influx. The second position was taken by Brexit as Theresa May triggered Article 50, thereby starting the two year negotiating period with the European Union. Oil prices continued to trend higher as supply tightened. Water equities trended as bottled water overtook soda drinks as the most consumed drink in the United States per person in 2016. Finally, the materials sector trended as Dow Chemical and DuPont won EU approval for their mega-billion merger.