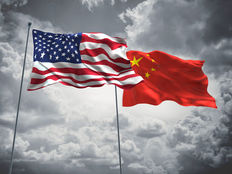 Trending: The Future of U.S.-China Relations In The Trump Era

Several important events happened this past week. As the title suggests, the meeting between U.S. President Donald Trump and his Chinese counterpart was of the utmost significance. Indeed, China took first place on the list, followed by crude oil, which has been on a tear lately. The news that Tesla became the largest U.S. automaker lifted two sectors – automotive ETFs and lithium. Finally, Amazon trended this week, as the online retailer has been crushing its brick-and-mortar peers. Find our previous Trends edition at Trending: Brazil May Lower 2018 Inflation Target as Recession Still Weighs.

With a 141% increase in traffic, China has taken first place in the Trends’ list this week. The meeting between Trump and Chinese President Xi Jinping has grabbed headlines lately, although the event was somewhat overshadowed by the concurrent U.S. military strikes in Syria. The main takeaway from the convention of the two leaders was a 100-day plan aimed at reducing trade imbalances between the two largest economies in the world. Admittedly, the parties were light on details, but it is likely the plan would include various concessions from China on trade. Officials made clear the goal was to expand U.S. exports to China in order to shrink the $347 billion deficit as opposed to reducing Chinese imports.

At least for now, a trade war between the nations has been averted. Both Trump and Xi suggested the interaction was not confrontational and instead quite encouraging, while Commerce Secretary Wilbur Ross said he was surprised to see the Chinese party interested in reducing the net trade balance. For a start, China had already agreed to provide increased market access for financial sector companies and beef exports.

The meeting has had a slightly negative impact on Chinese stocks. iShares China Large-Cap ETF (FXI A) has dropped about 0.5% since April 8, reducing year-to-date gains to 10.5%. To easily find ETFs exposed to a particular country, check our ETF Country Exposure tool. Select a specific country and get a list with all the ETFs with exposure to your pick.

Crude Oil on a Tear Again

Crude Oil has resumed its upward trajectory, after several months of losses due to rising U.S. stockpiles. Oil has taken the second spot on our list this week with a 139% increase in viewership. Over the past five days, United States Oil Fund (USO B) has jumped 4%, extending 30-day gains to as much as 8%. However, year-to-date, crude remains down a little more than 5%. For a deeper analysis on individual ETF investments such as (USO B) or (FXI A), use our ETF Analyzer tool. You can select ETFs by category or type as well as add individual ticker symbols to compare performance, expenses and dividend yield among other metrics.

Several factors contributed to the oil’s renewed ascent. First, an oilfield in Libya halted production of 200,000 barrels per day after just one week of being reopened. It is unclear why Libya stopped production, but the nation’s National Oil declared force majeure, indicating the incident could be linked to ongoing clashes between rival armed groups. Second, Saudi Arabia said it wanted to extend supply cuts by another six months. Third, flaring geopolitical tensions such as North Korea’s nuclear threats and U.S. bombing of Syria underpinned oil prices.

To be sure, geopolitical tensions could also have a negative impact on demand, putting pressure on prices. But the overall picture has improved after the U.S. reported a fall of 2.2 million barrels for the week ended April 7, the largest drop this year.

This week, Tesla (TSLA) briefly became the most valuable automaker in the U.S., overtaking legendary General Motors (GM). For this reason, automotive ETFs were in demand, seeing their traffic surge 133%.

With the recent acquisition of SolarCity and its venture into battery production, Tesla has become much more than an automaker. Whether the company’s valuation is nearly $50 billion is a matter of fierce debate, with some believing the company could be worth much more if Elon Musk succeeds at implementing his vision to create a one-stop shop for all things green. Just recently, Musk revealed a plan to build energy self-sufficient houses.

The company has its fair share of detractors, who argue the stock is in bubble territory. They point to the heavy competition it faces in the automobile business from all established firms, including General Motors and its recently launched all-electric Chevy Bolt.

The moment of truth will probably come later this year, when Tesla is slated to reveal its much-awaited affordable car, which is expected to have a starting price of $35,000 and a range of 215 miles. Ironically, GM already achieved these targets with the launch of its latest Chevy Bolt.

However, many argue Tesla’s products captivate customers in a way other brands cannot, hence the valuation.

Amazon (AMZN) has seen its traffic surge 71% this week, as the company’s shares edged up following an acquisition announcement.

The company’s stock is up 20% this year and is on track to reach the $1,000 level. The firm headed by Jeff Bezos has jumped more than 5% over the last 30 days. Most of the surge took place after the technology company said it will acquire Souq.com, a Middle eastern e-commerce site. Undoubtedly, investors have also been cheering the stunning success of Amazon’s home speaker Echo and intelligent assistant Alexa.

Lithium Rises Along With Tesla

Lithium has seen its viewership rise 65% this week, largely because Tesla dominated the headlines with its outstanding stock performance. Global X Lithium ETF (LIT C+) is slightly down this past week, but over the past 30 days it has advanced more than 7%.

FMC Corp. (FMC), a $9 billion market-capitalization firm that has a lithium arm, makes up nearly a fourth of the lithium ETF. In addition, the ETF has about 6% exposure to Tesla. Lithium is heavily used in the production of batteries. With the advent of electric cars, demand for the metal is expected to increase dramatically over the next few years. A recent report by MarketsandMarkets predicts the market will grow by 16% annually in the next five years to $69 billion. Sign up for ETFdb Pro and get access to real-time ratings on over 1,900 U.S.-listed ETFs.

Donald Trump and Xi Jinping met last week, staving off fears of a trade war between the two largest economies in the world: the U.S. and China. The two leaders apparently hit it off, agreeing to draw together a plan to reduce trade imbalances between the nations. Crude oil rallied lately, as Libya stopped production at an oilfield and Saudi Arabia signaled plans to extend supply cuts. Tesla briefly became the largest automaker in the U.S., something that lifted lithium and automotive ETFs. Finally, Amazon jumped closer to the $1,000-per-share level after announcing the acquisition of a Middle Eastern e-commerce website.