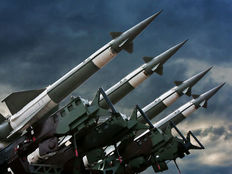 Trending: U.S. Drops 'Mother of All Bombs' on ISIL Targets in Afghanistan

Aerospace & Defense stocks were the clear winners this week to no one’s surprise. U.S. attacks in Syria along with the dropping of the MOAB in Afghanistan sparked renewed attention to the sector. Airlines trended this week largely because of the passenger being dragged off a United Airlines’ plane incident. The U.S. dollar made it into the top three as the currency weakened of late. Finally, investors have shown signs of jitters, with precious metals and the Japanese yen taking the two last positions.

Review our previous edition at Trending: The Future of U.S.-China Relations In The Trump Era.

Aerospace & Defense ETFs have seen their viewership jump 251% over the past week, more than double that of the second position’s. Undoubtedly, investors turned their attention to the sector after the U.S. intensified its attacks in the Middle East. First, U.S. President Donald Trump approved a missile strike on a Syrian airfield after a chemical attack on innocent civilians allegedly conducted by the rogue nation’s government. Second, last Thursday, the U.S. military said it had dropped the so-called “Mother of All Bombs” (MOAB) on a network of tunnels used by the Islamic State in Afghanistan. MOAB is the largest non-nuclear bomb ever employed by the U.S. military in combat.

Furthermore, a meeting between Trump and NATO General Secretary Jens Stoltenberg reassured investors of America’s commitment to the military bloc. On the campaign trail, Trump had suggested he considered NATO an anachronistic entity, but now he said the organization was “no longer obsolete.” Still, Trump insisted that other members of the bloc should raise their defense budget to 2% of the GDP. Stoltenberg said the increases were happening gradually as many NATO countries acknowledged that geopolitical threats are on the rise.

All of these developments are music to the ears of aerospace and defense investors. iShares U.S. Aerospace & Defense (ITA B) is up more than 6% since the start of the year and about 24% over the past 12 months.

Airlines has seen its traffic rise 98% over the past week as the industry as a whole was dragged down by an unfortunate incident that caused a public outcry. United Airlines made the headlines last week after media reports said a passenger was forced off a flight through the use of violence. A video of the incident went viral, prompting the company’s leadership to apologize repeatedly to its customers. So far, no one has been fired, but the company said it will change rules so that such an incident never happens again.

A passenger refused to take a flight the next day in order to make way for several United employees. Dr. David Dao was then dragged off the plane forcefully by the police, injuring him severely.

The incident happened about a week before United published its first-quarter results. Revenue was up by 2.7% to $8.4 billion, while net income came in at $96 million or 31 cents per share, significantly below $313 million reported in the same period last year. However, excluding one-off items, United earned 41 cents per share, beating expectations of 38 cents.

U.S. Global Jets ETF (JETS C) was down just slightly over the past five days, despite United’s poor performance. United, which makes up about 12% of the ETF, dropped more than 5% following the incident, before recovering consistently on Thursday. Still, it underperformed its three largest peers in the past week: Delta Air Lines (DAL) by 2 percentage points, American Airlines (AAL) by 3 percentage points, and Southwest Airlines (LUV) by nearly 5 percentage points.

The U.S. dollar has weakened lately, chiefly due to a slew of soft economic data boosting bets that the Federal Reserve will delay another hike. The greenback took third place on the list with a 79% increase in viewership. PowerShares DB U.S. Dollar Index Bullish Fund (UUP A) dropped about 1% over the past five days, extending year-to-date losses to 2.6%.

The dollar started to weaken on April 7 when the Bureau of Labor Statistics reported the U.S. economy added 98,000 jobs in March, considerably lower than consensus estimate of 175,000. A week later, the greenback’s slide accelerated following a lousy inflation report. The Consumer Price Index (CPI) fell a stunning 0.3% in March, surprising analysts, who had expected a flat figure. Year-over-year, the CPI was still above the Federal Reserve’s 2% target, at 2.4%, although analysts forecasted a rise of 2.6%. The weak data is likely to make the Fed think twice before raising rates at its June meeting. Next month’s data will be crucial for the Fed and the markets, as another batch of soft data will push back a hike at least until September. Currently, the market gives a 46.5% probability for a June hike, according to CME Group’s FedWatch tool.

For a deeper analysis on individual ETF investments such as (UUP A) or (JETS C), use our ETF Analyzer tool. You can select ETFs by category or type as well as add individual ticker symbols to compare performance, expenses and dividend yield, among other metrics.

Precious metals have taken the fourth spot with a small 35% increase in traffic. Safe havens have been in demand lately thanks to poor U.S. economic data, intensifying geopolitical worries and a weak dollar. SPDR Gold Shares ETF (GLD A-), for example, is up 3% over the past month and more than 11% since the beginning of the year.

The unfolding drama in Syria and the potential for a U.S. nuclear war with North Korea boosted the appeal of precious metals. The North Korean threat, at least, faded for a while after the nation unsuccessfully launched a missile, which blew seconds after liftoff. This eased concerns that the nation may attack the U.S.

Traffic to the Japanese yen has crept up 22% over the past week. Investors piled into the currency as geopolitical tensions increased. Guggenheim CurrencyShares Japanese Yen Trust ETF (FXY C+) has advanced 0.7% over the past five days, extending year-to-date gains to more than 7%.

Investors are continuing to buy the yen in times of crisis even though the country’s economic health is far from ideal. Japan’s government debt of nearly 250% of GDP is the largest in the world, and the economy has been on life support for years now. The Bank of Japan is expected to keep rates at zero, while continuing to pump liquidity into the economy via asset purchases.

The U.S. dropping the “Mother of All Bombs” in Afghanistan was bad news for terrorist group ISIS but extremely good for Aerospace & Defense ETFs, which gained renewed attention amid intensifying geopolitical tensions. United Airlines was in the spotlight as its stock lost ground following the incident of a passenger being violently removed from one of its planes. The U.S. dollar depreciated against most currencies over the past two weeks as a batch of economic data disappointed investors. Finally, the Japanese yen and precious metals trended, thanks to rising geopolitical worries.