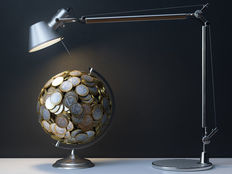 Trending: Defense Stocks in the Spotlight as Geopolitical Tensions Rise

Aerospace & defense ETFs have enjoyed the biggest increase in viewership this week – up 101%, as bewildered investors watched Trump and Kim Jong-un trade blows and threaten military attacks. iShares U.S. Aerospace & Defense (ITA B+) has jumped more than 1% this week, extending year-to-date gains to as much as 20%. Sign up for ETFdb.com Pro and get access to real-time ratings on over 1,900 U.S.-listed ETFs.

While on vacation in New Jersey, Trump warned North Korea not to make any more threats to the United States, threatening back “fire and fury like the world has never seen.” Shortly after Trump’s belligerent comments, North Korea said it was examining a plan to strike a U.S. military base in Guam. Rex Tillerson, the U.S. Secretary of State, later calmed investors, saying a potential conflict is a remote possibility. He also argued that Trump used the strong language in order to make Kim Jong-un understand the dangers.

Although North Korean nuclear arsenal seems weak, the U.S. intelligence services have assessed that the nation has produced a small nuclear warhead.

The negative developments have prompted North Korea’s neighboring countries to respond. South Korean President Moon Jae-in said the nation needed a complete overhaul of its military capabilities to be better prepared in case a conflict erupts. That is good news for defense companies, because they may experience a ramp up in orders in the near future. A Japanese official welcomed Trump’s comments, saying the U.S.’ “deterrence capability is extremely important to Japan.”

Defense stocks have been rallying over the past years, as geopolitical tensions escalated, with the eruption of Syrian and Ukrainian conflicts being among the most notable.

Lithium Up on Tesla’s Model 3

Lithium ETFs have seen their viewership rise 93% since last Thursday, largely because Tesla’s Elon Musk revealed the Model 3 affordable electric car. Global X Lithium (LIT C+) has jumped more than 8% over the past 30 days, while year-to-date gains stand at an impressive 32%.

Tesla’s flagship Model 3, the affordable electric car with which Elon Musk wants to revolutionize the car industry, was revealed recently. Initial reviews were all positive, with most analysts being taken by surprise by the small cost relative to what it offers, including a very good battery range. The product launch was quite successful, but now Tesla has to demonstrate whether it can mass-produce the Model 3. The company manufactured 84,000 cars last year, but in 2017 it wants to ramp up production more than five-fold. In 2018, its objective is to build around half a million cars.

Demand for lithium, which is a critical component for car batteries, is sure to increase over the next few years, and analysts are already speculating that lithium refineries may struggle to meet it.

Lithium got another boost last week following a report saying German car executives were on the verge of announcing the construction of a lithium-ion gigafactory resembling Tesla’s joint venture with Panasonic. A consortium of 17 companies teamed up to draw the plan and have already received approval from the German government. The factory is expected to break ground in the fourth quarter of 2019 and reach full capacity in 2028.

For a deeper analysis on individual ETF investments such as (LIT C+) or (ITA B+), use our ETF Analyzer tool. You can select ETFs by category or type as well as add individual ticker symbols to compare performance, expenses and dividend yield, among other metrics.

Alternative Energy ETFs go hand-in-hand with lithium, particularly when Tesla is in the news. Alternative Energy ETFs have seen their traffic rise 84% over the past week, a bit behind lithium. However, the performance of green ETFs has been superior to lithium, with Guggenheim Solar (TAN C+) surging more than 10% in the past 30 days and 32% since the beginning of the year.

Green energy stocks are not receiving a warm welcome from the White House. Trump’s support for the coal industry and his shocking withdrawal from the Paris Climate Accord has hurt the industry. However, alternative energy is finally becoming profitable without government subsidies, and the production cost is now mostly at par or below natural gas and coal.

In the short run, environmental ETFs may continue to outperform despite lack of government support. According to various reports, many environmentally-conscious investors are committed to countering Trumpism and deploying more funds to alternative energy equities.

Semiconductors ETFs have seen their traffic rise 61% this past week, as most of the companies in the sector posted their second-quarter results. Increasing demand for products ranging from smartphones, tablets and Internet of Things (IoT) devices boosted the earnings of semiconductor companies, and the trend is expected to continue in the following quarters. iShares PHLX Semiconductor (SOXX A-) has jumped about 1% over the past five days, extending year-to-date gains to as much as 21%.

Over the past few years, semiconductor stocks have rallied impressively, as they enjoyed rising demand for chips from traditional technology companies but also from automakers.

Leveraged equities have seen their viewership jump 39% this week. Most leveraged ETFs have had a good run over the past few months as the stock market rose incessantly. Ultra S&P500 (SSO A), an ETF leveraged two times to the S&P 500, has jumped nearly 23% since the start of the year, beating the S&P 500 by around 11 percentage points.

Leveraged ETFs are for investors who have a tolerance to high risk. These instruments are performing well in environments with low volatility and trending markets, which has been the case for the past six months. Volatility has been extremely low and global markets have risen steadily.

This week was all about Tesla’s launch of the Model 3 electric car and the increasingly heated rhetoric between U.S. President Donald Trump and North Korean leader Kim Jong-un. Defense ETFs have rallied on the prospects of rising demand for army equipment from war-fearing governments. Alternative energy ETFs and lithium got a boost from the successful launch of Tesla’s Model 3, while semiconductors benefited from rising demand for chips. Finally, leveraged equities are attractive in this low volatility, trending market environment.