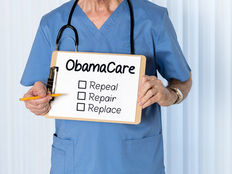 Healthcare stocks were in the spotlight this week as the U.S. Senate fights to repeal the Affordable Care Act. Healthcare ETFs took first place on the list, far ahead of real estate and silver, the second and third places, respectively. Municipal bonds and volatility ETFs close the trends’ list. Read our previous trends edition at Trending: Corn Falls Due to Heavy Northeast Rains.

Healthcare ETFs saw their traffic rise 147% this week, more than double that of real estate, the second topic. In a rather dull week, investors have turned their attention to the U.S. Senate, which again marginally failed to pass a bill repealing certain provisions of the Affordable Care Act, or ObamaCare. The Health Care Select Sector SPDR Fund (XLV A) has fallen nearly 1% over the past five days, trimming year-to-date gains to 15%.

Senate Republicans and President Donald Trump have been trying for more than a year to repeal ObamaCare and replace it with something else. Although Republicans have a majority in both the Senate and Congress, every attempt to gut ObamaCare ended in failure. The latest bill, dubbed “skinny Obamacare repeal,” was voted down with 51 votes against it, with all Democrats and three Republicans casting their ballot against the bill. Shares in healthcare stocks were largely unchanged following the failed vote.

Over the past year, however, healthcare stocks rallied on expectations that Republicans along with President Trump will be supportive of the industry, unlike the Democrats, who pledged to crack down on price-gouging practices. Initially, Trump had also signaled that he would take measures to increase competition for government contracts, but he later backtracked on such promises.

Among other things, the ‘skinny repeal’ consisted of the revocation of the individual mandate, which penalized those unwilling to buy healthcare, the elimination of the employer mandate for eight years and gave more leeway to states through waivers. Experts on the matter, ranging from insurers and consumer advocates, broadly argued that repealing the key provisions without replacing them may wreck the insurance markets, with premiums expected to rise and insurers ready to leave. According to the Congressional Budget Office, around 15 million people would have lost their coverage in 2018 if the repeal was approved.

Real estate saw its viewership jump 68% this week, despite tepid activity in the stock markets. Vanguard REIT (VNQ A) has dropped 0.51% over the past five days, cutting year-to-date gains to just 1.6%.

Although the REIT ETFs may not show it, some U.S. housing markets are getting in the overheated territory. According to CoreLogic, the markets in Denver, Houston, Miami and the Washington, D.C., metropolitan area are now overvalued. The research firm assigns the ‘overvalued’ sign on the markets in which prices are more than 10% above their sustainable historical levels. All other U.S. markets are considered fairly valued and none are undervalued. In June, U.S. home prices rose 6.7% compared to the same month a year ago and are up more than 50% since their 2011 nadir reached during the height of the economic crisis. The rate of unsold homes is also at the lowest levels for a second-quarter reading in 30 years, at just 1.9%.

VNQ, which contains Simon Property Group (SPG) and Equinix (EQIX), among other real estate companies, has steadily risen over the past five years, gaining more than 27% during the period.

For a deeper analysis on individual ETF investments such as (VNQ A) or (XLV A), use our ETF Analyzer tool. You can select ETFs by category or type as well as add individual ticker symbols to compare performance, expenses and dividend yield, among other metrics.

Silver took third place on the list with a 63% increase in traffic. The shiny metal has been largely shunned over the past period, as investor optimism recently hit a 16-year high. iShares Silver Trust (SLV B-) has declined 0.6% over the past five days, although year-to-date it remains up 3.7%.

A rising global economy and a temporary pushback of a populist wave across the world boosted investor optimism. Stock markets across the world have been in rally mode, with volatility at very low levels. The Eurozone economy has been strengthening of late, but the U.S. has hit a rough patch. Because many of the large companies in the U.S. generate a large chunk of their business outside the U.S., the S&P 500 and Dow Jones posted strong performances. Given the calmness in the markets, the safe-haven appeal of silver dwindled.

A rare presence in our weekly trends’ list, Municipal Bonds saw their traffic jump 49% this week. The asset class has been recovering from a steep drop following the victory of Donald Trump in the U.S. presidential election. iShares National Muni Bond (MUB A) is up nearly 1% over the past month and as much as 2.4% year-till-date. However, (MUB A) has not fully recovered from the drop following the election of Trump, with the ETF still down more than 2% over the past 12 months.

Municipal bonds are exempt from federal taxes and so investors thought that demand would fall because Trump promised extended tax cuts. However, Trump and the Republicans have not been very successful so far in implementing their agenda and are currently struggling to repeal Obamacare. Focus also shifted to an investigation into whether the Trump campaign colluded with Russia to win the elections. As a result, municipal bonds have slowly started to recover to their nadir reached in July 2016, as optimism that Trump would be able to cut taxes dropped.

Volatility instruments are continuing to be crushed due to an odd lack of volatility in the markets. iPath S&P 500 VIX ST Futures (VXX A-) have dropped 1.3% over the past five days, extending year-to-date losses to as much as 56%. As a result, volatility category witnessed a 42% bump in viewership.

Despite their poor performance over the past period, volatility ETFs may start to become attractive to the investors given their low prices, but a market correction is not yet in sight. Supporting this trend, global stock markets have been strong over the past period with Europe finally awakening and the U.S. continuing its march higher. Global economies are robust, despite some temporary weakness in the U.S.

Healthcare stocks were slightly down this week, as Senate Republicans have failed to repeal some provisions of the Affordable Care Act. The real estate sector looks healthy, although parts of the housing market seem overvalued. Silver and volatility are still unattractive for global investors, thanks to low volatility and broad market optimism. Meanwhile, municipal bonds have been recovering their losses stemmed from the election of Donald Trump as president.