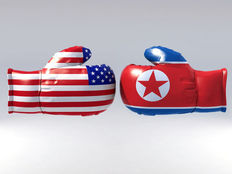 For a second week in a row, investors were preoccupied by two things – the escalation of rhetoric between the U.S. and North Korea, and Tesla. South Korea took first place on the list, as investors assessed the potential impact of North Korea’s nuclear threats on the nation’s economy. Aerospace & defense ETFs is third on the list after last week’s performance as the clear leader. Inverse volatility and retail ETFs share the bottom two positions on the list. Junk bond ETFs also trended this week, as Tesla raised $1.8 billion in debt to finance its operations and mass-produce its affordable Model 3.

Check our previous trends edition at Trending: Defense Stocks in the Spotlight as Geopolitical Tensions Rise.

Perhaps, South Korea, with an increase in viewership of 460%, is the country most at danger if the ongoing verbal spat between its rogue neighbor North Korea and the U.S. morphs into a full-blown conflict. However, the nation’s stock market has shown only minor signs of worry since the conflict erupted. iShares MSCI South Korea (EWY B) has fallen more than 3.5% over the past 30 days, but it remains up 27% since the beginning of the year. Over the past five days, stocks have advanced, as the verbal conflict abated.

North Korea also backed off from a threat to launch a nuclear attack on U.S. territory Guam, at least temporarily easing tensions. Kim Jong-un, the North Korean leader, said he wanted to wait the next move by U.S. President Donald Trump, who had previously warned of unleashing “fury and fire” if North Korea continues down its bellicose path.

South Korea, meanwhile, warned Trump against initiating a unilateral attack against its neighbor. “No one should be allowed to decide on a military action on the Korean Peninsula without South Korean agreement,” recently-installed liberal President Moon Jae-in said in a statement. When he was a presidential candidate, Moon promised Koreans that he would say “no” to Americans if necessary. Moon has clearly suggested that he is against war, as Korean people fear military escalation. He said recent economic sanctions imposed on the country were to bring back nuclear disarmament to the negotiating table and “not to raise military tensions.”

Inverse Volatility ETFs have been in the spotlight lately as their performance disappointed following the escalation of the verbal conflict between North Korean leader Kim Jong-un and U.S. President Donald Trump. Inverse Volatility ETFs have seen their viewership rise an impressive 365% over the past week, as these instruments fell abruptly. ProShares Short VIX Short-Term Futures (SVXY A-) has tumbled nearly 6% over the past five days, extending monthly losses to 6%. However, (SVXY A-)’s performance this year remains outstanding, up more than 75%.

For a deeper analysis on individual ETF investments such as (SVXY A-) or (EWY B), use our ETF Analyzer tool. You can select ETFs by category or type as well as add individual ticker symbols to compare performance, expenses and dividend yield, among other metrics.

Volatility has been eerily low over the past year, despite a rise in global uncertainty stemming from Brexit and the election of Donald Trump. In the past month, however, volatility spiked a little due to fears of a conflict between the U.S. and North Korea.

On the economic front, the European economy has been showing signs of strength, while the U.S. slowed down slightly.

Aerospace & Defense stocks are the clear winner from the escalation of rhetoric between the U.S. and North Korea, present for the second consecutive time in the trends’ list. In the previous week, defense ETFs took first place, but now they are third with a 230% rise in viewership. iShares U.S. Aerospace & Defense (ITA B+) has been among the few risers over the past month, advancing 3.4%. For the past five days, (ITA B+) is up just slightly.

The belligerent statements of both North Korea and the U.S. prompted surrounding countries to rethink their military strategy and increase spending on armament. South Korea’s new liberal President, Moon Jae-in, promised to increase military spending to 2.9% of GDP, representing the highest amount since the 1980s. His promise was before the U.S. and North Korea exchanged military threats. Now, investors think Moon may increase the military budget even more, and other countries may follow suit.

Tesla to Raise More Than Sought in Oversubscribed Bond Offering

Junk Bond ETFs have seen their traffic surge 66% over the past week, with the interest largely due to Tesla’s hugely successful high-yield bond offering. Tesla raised $1.8 billion, which was $300 million more than expected, in a placement last Friday. The terms of the deal are incredibly favorable to Tesla, which will pay a yield of just 5.3%.

The offering came days after the firm unveiled its affordable car Model 3, which was positively received by critics. Elon Musk, the company’s founder and CEO, said the proceeds will be used to strengthen the company’s balance sheet for a Model 3 production ramp-up. Musk hopes to build 500,000 models by the end of next year.

The fact that Tesla sold the bonds at such a low yield is all the more surprising given the fact that junk bonds have dropped lately on geopolitical worries. As it happens in times of stress, investors flew away from risky assets and bought safe havens, including gold, silver and the Japanese yen. iShares iBoxx $ High Yield Corporate Bond (HYG B+) was down nearly 2% in the week to August 11, the day of Tesla’s bond offering, but recovered some of the losses this week. Year-to-date, (HYG B+) is up 1.6%.

Retail stocks have had another bad week, as some of the companies in the industry announced thoroughly bad financial results. Retail ETFs have seen their traffic rise 61% since last Thursday.

Over the past five days, SPDR S&P Retail (XRT B+) has tumbled nearly 4%, extending year-to-date losses to more than 11%. The poor performance comes against a backdrop of rising overall stock markets, with the S&P 500 roughly flat in the past week and up more than 10% since the beginning of the year.

Retail stocks were dragged down by auto retailers, with Advance Auto Parts (AAP) and O’Reilly Automotive (ORLY) both slumping more than 20% on a recent profit warning. Elsewhere in the retail industry, the picture looks mixed. Dick’s Sporting Goods (DKS) plunged more than 23% after cutting its annual sales forecast, while stocks of Home Depot (HD) fell despite posting strong results.

South Korea was in spotlight this week due to an escalation of military threats between North Korea and the U.S. For the same reason, aerospace & defense ETFs trended. Inverse volatility ETFs were pummeled as volatility surged on the back of geopolitical tensions. Despite a grim outlook for junk bonds, Tesla succeeded in raising $1.8 billion at a relatively low interest rate. Finally, retail stocks have struggled of late because of falling sales.