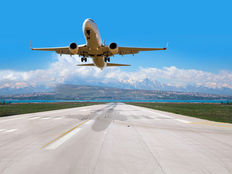 Hurricane Harvey and the recent terrorist attacks in Barcelona are disrupting airline operations, forcing carriers to endure revenue declines. The Indonesian government has reached an agreement with Freeport-McMoRan (FCX) to take a 51% stake in the world’s second-largest copper mine. Mortgage-backed securities are back in fashion as portfolio managers shift from corporate debt to mortgage bonds. Precious metals spiked, gold passed through $1,300 per ounce, which is back to last November’s highs, while Harvey’s reverberations in the U.S. oil industry increase.

Airlines Face an Array of Headwinds

Naturally, calamities and terror attacks of such magnitude have a terrible impact on travel, and airlines are taking a serious hit. Small wonder that airlines ETFs attracted significant interest among viewers with a 73% rise in traffic as investors try to factor in the financial consequences of Harvey and the Barcelona attacks.

Unfortunately for airline investors, there are additional reasons for concern in the industry. Fears related to capacity overexpansion were re-ignited, with July traffic reports of most carriers showing a fall in load factor. Capacity expansion has outweighed traffic growth, thus causing a deterioration of the percentage of seats filled by passengers. The decline of unit revenues forces companies to cut fares and evidently suffer a slide in profits.

Higher labor costs have hurt airlines in the last few quarters and little improvement is in sight on this front. Delta Air Lines (DAL) expects non-fuel unit costs to rise approximately 4%, while consolidated cost per available seat miles is anticipated to escalate by 5% at American Airlines (AAL). Allegiant Travel Company (ALGT) also expects the cost per available seat miles (CASM), excluding fuel, to increase in the band of 16-18%.

In addition, WOW Air, an Iceland-based airline made an announcement that hurt the stocks of major airlines by 2% to 3.5%. The low-cost carrier said it plans to expand into four Midwest cities and sell $149.99 one-way tickets to European destinations as it seeks to mold Reykjavik into a prime transatlantic hub.

Lastly, the twin attacks on Spanish soil have had a negative effect on travel stocks, but it is likely to have been surpassed in the eyes of investors by more positive news. Fresh details from players like Delta, American Airlines and JetBlue Airways Corporation (JBLU) about intentions to add additional flights have helped alleviate the burden of recent events.

As a result, U.S. Global Jets ETF (JETS C+) has had a rough summer but keeps a positive figure for the year, with a 2.37% increase. Investors are looking for a turnaround and the recent July highs may be restored as soon as some of these headwinds fade.

Copper ETFs have enjoyed renewed interest with a 92% rise in viewership thanks to a deal between the Indonesian government and Freeport-McMoRan (FCX) regarding the transfer of a controlling majority of Grasberg copper and gold mine. As such, Indonesia regains sovereignty over its natural resources, ending a bitter dispute with the U.S. miner, which had caused social unrest in the country.

Under the agreed terms, Freeport-McMoRan’s subsidiary will be allowed to mine and export, enjoying similar legal and fiscal assurances as it had during the last three decades but has to hand over control of the company to local owners. Higher royalties on mining activities and the construction of a smelter in the country within five years are also part of the deal allowing the company to operate the mine until 2041 under a special license.

Copper futures have climbed throughout most of 2017, and related products like iPath Dow Jones-UBS Copper ETN (JJC A) and United States Copper Index Fund (CPER A-) have been favored by investors, both gaining over 22% year-to-date.

Mortgage-Backed Securities Back in Favor

The once much-loathed mortgage-backed securities may be in the early stages of a comeback, with an 85% surge in traffic representing proof that investors are turning their attention to this type of securities once again. It seems that the big players are becoming restless about corporate junk debt, preferring to load up on mortgage bonds instead. In an attempt to safeguard their portfolios, Pacific Investment Management Co., Goldman Sachs Asset Management and others are getting their grip on bonds tied to subprime mortgages and other home loans made before the housing crisis, while selling speculative-grade company debt.

A widespread view seems to prevail that the housing market offers stability, safety as well as decent yield. A rise of 45% in the U.S. home prices since the depths of the 2008 financial crisis coupled with a severe fall in mortgage default rates – from 5.9% in 2009 to just 0.6% this June – have managed to convince investors that MBS are again attractive. At least when compared to corporate bonds with rising debt levels relative to assets, paired with a Federal Reserve in selling mode, money managers seem to prefer returning to pre-crisis habits and shift their attention to mortgage bonds.

Mortgage-backed securities ETFs have been through a rough patch since the start of the year but gained momentum of late. iShares CMBS ETF (CMBS A-) offers exposure to diversified maturity debt and has an overall strong (67%) AAA credit quality.

Metals and mining ETFs claimed fourth place this week, owing most of its 72% traffic surge to gold and silver. The shiny metals have benefited from enthusiastic inflows due to political tensions in the Korean peninsula and fears of a slowdown in the developed markets.

A conflict settlement in Zambia between the state-controlled electricity utility and Glencore (GLEN) has eased concerns that the Switzerland-based miner would face major disruptions at its Mopani Copper Mines.

iShares MSCI Global Select Metals & Mining Producers ETF (PICK A) is a great product for investors seeking to profit from these developments – it has posted a robust 6.75% surge during the past month and a strong 28% year-to-date. For a deeper analysis on individual ETF investments such as (CPER A-) or (PICK A), use our ETF Analyzer tool. You can select ETFs by category or type as well as add individual ticker symbols to compare performance, expenses and dividend yield, among other metrics.

Crude oil ETFs saw its traffic rise 27% during the last week. Refinery shutdowns along the U.S. Gulf Coast, where almost half of the nation’s refining capacity exists, as well as reduced flow through different pipelines, have put pressure on the oil industry in the last few days and captured investors’ attention.

Across the Atlantic, three oilfields have been closed by Libyan militia brigades making economic demands. It is estimated that 30% of Libyan crude production has been disrupted as a result of such actions with no resolve seen in the near future.

Given the headwinds in the oil industry, investors can choose to take the other side of the market and look at ProShares UltraShort Bloomberg Crude Oil (SCO A+), which has posted a solid 30% rise since January.

The effects of recent natural adversities are being felt throughout the U.S. economy, with airlines the first to suffer. Meanwhile, energy markets have done their best to mitigate the knock-on effects on a large swathe of businesses. Around the world, resolved disputes in Indonesia and a healthy copper market enjoy positive attention. In the financial world, money managers are rebalancing their portfolios and adding mortgaged-backed securities into the mix. Lastly, precious metals are favored once again, while miners revel in a favorable environment.