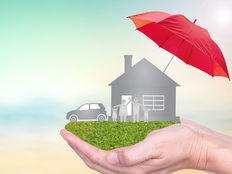 Another hurricane swept through Florida this week, turning investors’ attention once again to insurance stocks, first place on the list for a second consecutive week. Building & construction ETFs followed with an impressive increase in viewership. Crude oil is third on the list, as the back-to-back hurricanes damaged some U.S. refineries but also dented demand. The S&P 500 Index, now in its ninth bull year, has prompted market observers to scratch their heads, while China equities have continued their rally on unabated optimism. Check out our previous trends edition at Trending: Hurricane Harvey Devastates Insurance Stocks.

Insurance stocks are again in the hot seat with an impressive 203% rise in viewership, as investors feared the worst for the industry in the aftermath of hurricane Irma. Luckily for the insurance sector and for Florida, Irma’s intensity was less than feared, triggering a relief rally in insurance stocks. SPDR S&P Insurance (KIE A-) has advanced 3.6% this week, trimming monthly losses to just 3%.

Investors and pundits had feared hurricane Irma would be even more devastating than Harvey, which brought wide damage across Texas, pummeling insurance stocks. However, even though Irma struck the Florida Keys as a category 4 hurricane, the center of the storm missed Miami and lost steam as it mostly hit largely uninhabited areas. This past Monday, the hurricane was downgraded to a tropical storm.

Hurricane Irma’s loss in intensity is a monumental demonstration of how analysts and pundits predicted the potential damage all wrong. Initially, it had been thought the economic harm could reach well over $150 billion. The reality, however, is that the industry loss will probably not even reach $70 billion. The damage is still counted, but modeling firm AIR believes insurance firms will lose between $20 and $40 billion, while UBS analysts think losses could run between $60 and $70 billion.

The damage to U.S. economic growth is expected to be transitory. Many analysts believe it will have a negative effect on third-quarter GDP growth, but the increase in activity brought about by the re-building exercise will more than offset the damage in the last quarter.

Building & construction ETFs, which saw their viewership advance 86% this week, are expected to be busy in the upcoming period as orders may increase dramatically following the twin hurricanes. Investors took notice, sending the stocks higher. SPDR S&P Homebuilders (XHB A+) has jumped nearly 2% this week to ten-year highs, extending year-to-date gains to as much as 15.7%.

A broad range of companies in the homebuilding and infrastructure industry will see an increase in their sales as Florida and Texas start to rebuild damaged infrastructure and private homes. Retailers Home Depot (HD), Lowe’s Companies (LOW) and building materials manufacturer USG Corp (USG) are among the firms expected to get a boost in sales.

The rally in infrastructure and homebuilding stocks may continue into the upcoming period, although there are certain risks related to the potential damage brought about by the hurricanes. Authorities are still assessing the impact of both hurricanes, and less damage than expected could depress the industry somewhat.

For a deeper analysis on individual ETF investments such as (XHB A+) or (KIE A-), use our ETF Analyzer tool. You can select ETFs by category or type as well as add individual ticker symbols to compare performance, expenses and dividend yield, among other metrics.

Hurricanes Irma and Harvey both had negative and positive influences on crude oil, which saw its viewership rise by 78% this week. On the one hand, hurricane Harvey damaged U.S. production in Texas with the largest refinery temporarily closing doors. On the other, both Irma and Harvey dented demand as many households remain without electric power. Indeed, crude oil inventories jumped 5.9 million for the week ending September 8, while gasoline stocks saw a drawdown of more than 8.4 million barrels impacted by the production halt at the Texas refineries.

United States Oil Fund (USO B) fell a little less than 1% over the past week, reflecting the market’s undecidedness on how the twin hurricanes will impact prices. The small dip could also be attributed to the fact that a host of Gulf Coast refineries avoided being struck by hurricane Irma for a second time as it changed direction. Around six coast refineries are expected to resume production.

In other news, the Saudi Arabian oil minister met with his counterparts in Venezuela and Kazakhstan to negotiate the extension of a supply cut agreement which ends in March. A failure to reach an agreement will put pressure on oil prices, which have has stabilized around the $50 per barrel level.

The S&P 500 saw its viewership rise 71% this week, taking the fourth place in the list. The index recently reached new record highs as fears over the economic damage brought about by the twin hurricanes faded. SPDR S&P 500 (SPY A) has increased 1.4% over the past five days, extending year-to-date gains to nearly 12%.

Investors rushed to buy stocks after it became clear the harm caused by Irma and Harvey will not be nearly as large as expected. In addition, the negative effects of the hurricanes are expected to be transitory, and may spur some industries, including building and construction.

Traffic to Chinese equities has risen 66% in the past week. The nation’s equities have had a good run of late, with the iShares China Large-Cap (FXI A) surging 4.5% this month, as the renminbi continued to appreciate. Since 2015, when the Chinese government let the currency slide, the nation’s stock largely moved in tandem with the exchange rate, rising when it appreciated and vice-versa.

In addition, investor confidence surged in light of improving domestic and global economic conditions and dissipating fears that a domestic crackdown on debt will hurt GDP growth.

Hurricane Irma and Harvey have again trended this week, but investors breathed a sigh of relief as the damage caused by the natural disasters is expected to be significantly smaller than expected. Insurance stocks have recovered as a result, while building and construction ETFs surged on expectations of an increase in orders. Demand for crude oil was negatively impacted by the hurricanes, while the S&P 500 reached record highs on optimism about economic fundamentals. Finally, China equities have been rising lately thanks to improving economic data at home and abroad.