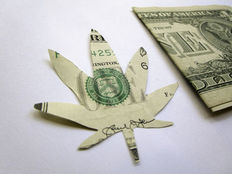 This Week's ETF Launches: Marijuana ETF Off to a Fast Start

The ETF industry didn’t slow down in the traditionally slow period between Christmas and New Year’s, as providers still managed to bring several new products to the marketplace.

The most notable of the group is the ETFMG Alternative Harvest ETF (MJX A), otherwise known as the Marijuana ETF. Since its debut just two weeks ago, the fund already has more than $300 million in assets.

The First Pot ETF in the U.S.

The Alternative Harvest ETF (MJX A) focuses mainly on the marijuana industry, but maintains a very broad definition of what being “involved” in the industry means. It holds positions in companies directly engaged in the cultivation, manufacture and distribution of cannabis products, but can also buy companies that produce fertilizers and pesticides used in the cultivation process, as well as traditional tobacco companies. This is how companies like Philip Morris, Altria and Scott’s Miracle-Gro end up in the portfolio. To date, it’s been a very volatile product, but interest has been high thanks to California’s recent legalization of recreational marijuana use.

State Street is partnering with next-gen analytics firm Kensho Technologies to develop three new ETFs targeting various segments of the new economy. The SPDR Kensho Intelligent Structures ETF (XKII C+), the SPDR Kensho Smart Mobility ETF (XKST B) and the SPDR Kensho Future Security ETF (XKFS B) will invest in companies involved in various emerging technologies, such as autonomous vehicles, smart power grids, drone technology and virtual reality. The theme of disruptive tech was a big winner in 2017, so it’s not surprising that bigger ETF providers are launching their own products. State Street’s ETFs will come cheaper than other players in the space, such as the ARK funds and the ROBO Global Robotics & Automation ETF (ROBO B-).

The new additions to WisdomTree’s lineup are about as diverse as they come. The WisdomTree U.S. Quality Shareholder Yield Fund (QSY B) is actually a repackaging of an old fund with a new index. Formerly the WisdomTree U.S. Large Cap Value Fund, the new fund targets companies with high total shareholder yields and relative quality characteristics. The WisdomTree Balanced Income Fund (WBAL B) is a fund of funds that uses other WisdomTree products to maintain a 60-40 mix of stocks and bonds. The WisdomTree ICBCCS S&P China 500 Fund (WCHN A) is a traditional market cap–weighted ETF that invests in 500 of China’s largest companies. The WisdomTree Managed Futures Strategy Fund (WTMF A-) takes both long and short positions in the futures contracts of various commodities, currencies and interest rates.

ArrowShares this week launches a pair of new funds that aim to achieve seemingly opposite goals. The Arrow DWA Country Rotation ETF (DWCR C) utilizes a momentum investing strategy that targets ten of the world’s strongest-performing foreign markets and then chooses ten companies within each country that display the greatest relative strength. The Arrow DOGS of the World ETF (DOGS ), on the other hand, takes a contrarian approach and looks for the world’s worst-performing countries. The fund’s deep value strategy focuses on companies within those nations that are best primed for a rebound.

The James Biblically Responsible Investment ETF (JBRI ) becomes the latest in a growing line of funds focused on religiously and socially responsible investing principles. The fund invests largely as you’d expect, excluding companies that develop or engage in alcohol, tobacco, gambling or human rights violations. It also excludes those companies involved in activities it deems “objectionable,” such as abortion and LGBTQ rights. Inspire Investing recently launched a group of similarly styled ETFs and caught some flak for what some perceived as discriminatory practices. The ESG space, however, is growing quickly, with more than a dozen funds launched last year alone.

There’s quite a variety in this week’s new fund list, but there’s little doubt that the ETFMG Alternative Harvest ETF will gain most of the attention. The market has been clamoring for an ETF in this space for a while, and now it has one. Outside of that, the sheer number of unconventional indices and strategies underscores the fact that ETF providers continue to target narrow areas of the market in order to gain both attention and share.

Sign up for ETFdb Pro and gain access to more than 50 all-ETF model portfolios, each of which is backed by an unique investment thesis.