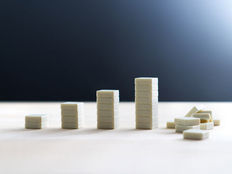 Although the hype surrounding bitcoin may have eased, the crypto aficionados are on the lookout for new opportunities and blockchain ETFs are the latest show in town. Concerns of persistent drought in the U.S. drove investor attention toward wheat. The continued rise in U.S. Treasurys coupled with fears of higher inflation numbers made inverse equity ETFs seize fourth place, while Tesla’s slowdown in cash-burn rate closed the list.

Check out our previous trends edition at Trending: Panic on Wall Street After First Market Sell-Off in Two Years.

The market sell-off that began a week before just accelerated last Monday, sending ripples throughout every corner of the financial industry. As a result, volatility-tied products like inverse volatility ETFs have suffered an immense blow and attracted massive viewership, up 1,800% in the past five days.

Once in the shadows, investments linked to volatility in the stock market imploded last week as the equity rout deepened amid rising concerns that inflation will lead to higher interest rates. Profitable and almost gaining “non-brainer” investment status, products like VelocityShares Daily Inverse VIX Short Term ETN (XIV B+) and ProShares Short VIX Short-Term Futures (SVXY A-) plunged more than 85% in one day, while others were halted by their issuers. The bloodbath erased more than $3 billion in investor capital, prompting Credit Suisse to end trading of (XIV B+) due to extensive losses.

The options and derivatives exchange group that issues the VIX has also suffered from the record upswing in the index as investors feared the negative impact on CBOE’s financial results after the demise of these VIX-related products and the associated revenues, estimated at around 20%. The ensuing 15% drop was, thus, far worse than Nasdaq’s 3% or Intercontinental Exchange’s 1.5% fall.

However, there are inverse volatility products that have endured the crash in a particular manner due to inherent differences, with VelocityShares Daily Inverse VIX Medium Term ETN (ZIV B+) among them. Although it tracks the same volatility index, this ETN is less volatile because it offers inverse exposure to an index comprised of mid-term VIX futures contracts instead of short-term, like the (XIV B+). It has only declined by 25% year-to-date and may be on track to post better performance for those waiting to get back into shorting volatility, once market nervousness abates.

While bitcoin has lost some of its allure, the underlying technology is just starting to make its way into financial markets and it is doing so by entering the ETF business. Viewership in the fresh segment of blockchain ETFs shot up by 1615% as investors showed growing interest toward the possibility of riding the blockchain wave without the wild ebbs and flows that characterize digital currencies.

Launched in the second half of January and posting inflows in excess of $250 million in just two weeks, the two most traded blockchain ETFs do not own any cryptocurrencies. Instead, they are aiming to buy shares of companies that are embracing blockchain. Amplify Transformational Data Sharing ETF (BLOK) is actively managed and owns shares in online retailer Overstock (OSTK), which waded into blockchain only recently. It has done so using both its tZero subsidiary, which entered a joint venture to trade digital coins, and through the venture capital firm it controls – Medici Ventures. It also invested in Square, a company started by Twitter’s Jack Dorsey, which allows users to trade bitcoin on its platform.

The other ETF that offers exposure to companies involved in the blockchain business is Reality Shares Nasdaq NexGen Economy ETF (BLCN), which differs from Amplify in that it is actually based on the Nasdaq’s newly launched index of blockchain-related companies. The ETF has, as its top holding, the world’s largest pure-play semiconductor foundry, Taiwan Semiconductor, but also the graphics processing unit producer Nvidia (NVDA) and German software giant SAP.

Both ETFs are also betting on the future of blockchain in the financial industry by holding Citigroup (C) and Goldman Sachs. On top of that, IBM’s (IBM) decision to partner with shipping giant Maersk to use the technology in tracking and managing supply chains made it an important asset for the two ETFs.

For a deeper analysis on individual ETF investments such as (BLOK) or (XIV B+), use our ETF Analyzer tool. You can select ETFs by category or type as well as add individual ticker symbols to compare performance, expenses and dividend yield, among other metrics.

ETFs linked to wheat prices like Teucrium Wheat (WEAT C) have seen their viewership rise about 184% this past week, as dry weather in the southern U.S. raised supply concerns, pushing futures prices to multi-months highs.

Although still in winter dormancy, the hard red winter wheat crop raised serious concerns because of the tight supply of soil moisture. The largest U.S. wheat class is grown in Southern Plains states such as Kansas and Oklahoma, where rain has been scarce since October. This triggered a sharp decline in monthly crop ratings in January as market participants looked for clues in weather forecasts and pushed the price of the futures contract to levels not seen since mid-August.

The run-up in prices has likely curbed export demand for U.S. wheat, a factor underscored last Thursday when the U.S. Department of Agriculture lowered its U.S. wheat export forecast for the 2017/18 year.

The Teucrium Wheat ETF (WEAT C) offers exposure to wheat futures contracts and has posted a satisfying 7.5% rise since the start of the year.

Investors Get a Taste of Shorting Stocks Through Inverse ETFs

As more investors manage to live with high volatility, ETFs offering exposure to the inverse performance of a wide array of stocks are likely to emerge winners in the short term. Traffic of Inverse Equity ETFs rose by 131% and money managers with a bearish outlook have found the instrument is matching the volatile times.

Despite a wide range of solid fundamental data across the globe, financial markets have plummeted in the last ten days. A storm was brewing in bond markets and it spilled further to stocks and volatility-linked products as panic grappled markets at the start of February.

Direxion Daily Small Cap Bear 3X Shares (TZA B+), an ETF leveraged three times, is a solid yet volatile option for profiting from current market nervousness among small caps. With a 6.2% rise from January 1, it outperformed larger inverse ETFs that have exposure to blue-chip stocks like Apple (AAPL) or Amazon (AMZN).

Probably the only significant piece of good news in the last Tesla (TSLA) report was the unexpected slowdown of the cash-burn rate to just $277 million, from 1.4 billion in the previous quarter. Fourth-quarter results led to a rise in traffic of 125% for ETFs with Tesla exposure.

The stock did not respond well to the mixed statement, falling by more than 7% before recouping some of the initial losses, as markets took note of the biggest-ever quarterly loss, a staggering $675 million. On the other hand, revenue topped targets for the California-based corporation while managing to deliver more than 102,000 vehicles in 2017. The company also kept its Model 3 production goal of 5,000 cars a week by mid-2018.

ARK Industrial Innovation ETF (ARKQ ) has Tesla as a top holding and benefited strongly from innovative companies like Baidu (BIDU), Nvidia and Amazon, posting a robust 41% rise over the last twelve months.

The implosion of a few volatility-related products spurred spectacular interest in the $8 billion market of inverse volatility ETFs. Cryptocurrency investors have a fresh segment available and poured impressive amounts into the newly launched blockchain ETFs. Wheat and other grains climbed to four-month highs on U.S. weather woes, while persistent volatility drives capital into inverse ETFs. Finally, Tesla’s earnings call pointed to an encouraging 2018 from a production standpoint, in spite of posting losses.