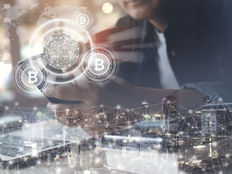 Bitcoin prices have been recovering of late, making a newly launched category of Blockchain ETFs attractive for our readers.

Inverse equity ETFs were second in the list as the global market recovery is underway. MLPs are becoming attractive again thanks to rising oil prices. Technology equities and aerospace & defense close the list.

Blockchain ETFs have seen their viewership advance 566% in the past week, as bitcoin prices have started a recovery, leaving many wondering whether a strong comeback is in sight. Bitcoin, for instance, received a boost after South Korea reversed its stance on cryptocurrencies trading, saying it will now allow and even encourage trading as long as these were normal transactions.

Amplify Transformational Data Sharing ETF (BLOK B-), which contains a host of chip companies with exposure to bitcoin mining, has advanced nearly 5% in the past five days. Bitcoin, meanwhile, is close to reaching the psychological $12,000 level, which may trigger another round of buying.

South Korea’s move is fundamental for the life of cryptocurrencies given that most bitcoin trading exchanges are in the country. Adding to the positive sentiment, the U.S. state of Wyoming passed a bill to relax securities requirements for some tokens.

The renewed interest in bitcoin comes amid a flurry of attacks from prominent economic and political figures who argue in chorus that cryptocurrency has failed as a currency due to its extreme volatility. The blockchain system underpinning most cryptocurrencies, however, has much fewer detractors. The emerging technology may be used in other realms than currencies, including projects geared to preserve global property rights and contribute to lower bureaucracy. Because records in the blockchain are irreversible, the technology may be applied in securing quick cross-border transactions and providing the necessary protections for both buyers and sellers.

The sell-off in the previous weeks, which was the first since early 2016, did not last long because it was not based on economic fundamentals. The global economy could not be in better shape, with all major regions firing on all cylinders.

Inverse ETFs have been on the minds of many investors in recent weeks, particularly short volatility ETFs. Unassuming investors increased bets on the lack of volatility and were blown away in the aftermath of the sell-off because the instruments fell by triple digits. As a result, Credit Suisse was forced to close down VelocityShares Daily Inverse ETF (XIV B+).

As the sell-off faded, investors’ attention may once again turn to the fundamentals of the U.S. economy and the federal tax cuts in particular. Index provider BlackRock, for instance, said the impending fiscal stimulus will boost earnings. Morgan Stanley, meanwhile, believes the recent sell-off was just an “appetizer” and the “main course” of selling activity is likely to come in the second quarter.

MLPs Back in Fashion as Oil Prices Rise

Master limited partnerships or MLPs have seen their viewership advance 199% this week, in a sign that the recovery in oil prices is making these ETFs attractive again. To be sure, MLPs are yet to stage a rebound, with Alps Alerian MLP ETF (AMLP A-) down 18% over the past 12 months. In the past five days, (AMLP A-) has dropped more than 2.6%, despite crude oil rising 1%.

Investor appetite for MLPs may resurge if oil prices continue to rise or at least stay at the current levels. MLPs, which combine the tax benefits of a limited partnership with the liquidity of a publicly traded security, are chiefly used in the midstream oil and gas sector as well as real estate which typically generate a predictable stream of income.

As oil prices continue to rise, shale players are expected to increase production, which in turn will need pipelines and other transportation means to move the product to the final customer. As a result, midstream companies may benefit from an increase in transportation fees. Another tailwind for MLPs is the tax reform, which on balance is expected to provide a positive impact. About 80% of distributions are deferred until units are sold, but the remaining 20% will benefit from the new tax code.

For a deeper analysis on individual ETF investments such as (AMLP A-) or (SH A+), use our ETF Analyzer tool. You can select ETFs by category or type as well as add individual ticker symbols to compare performance, expenses and dividend yield, among other metrics.

Technology equities have seen their traffic rise 175% in the past week, taking fourth position in the list. Tech stocks have led the gains in the recent market recovery, with Technology Select Sector SPDR Fund (XLK A) rising more than 1% during the past five days. For comparison, the S&P 500 was down 0.40% during the same period.

Technology stocks typically accelerate at a faster pace during bull markets, but they may also drop more abruptly in sell-offs. Over longer periods of time, however, technology stocks tend to outperform the broad market.

Defense Stocks Set to Benefit From Increase in Military Spending

As a result, defense stocks have outperformed. iShares US Aerospace & Defense (ITA B+) has advanced 1.9% in the past five days, easily beating the S&P 500, which dropped by 0.4%. Year-to-date, (ITA B+) is up as much as 7%, with the index never falling into negative territory for the year during the recent market rout.

Bitcoin prices have started to recover, triggering speculation whether the cryptocurrency may reach record highs. Inverse equity ETFs have posted declines this week, as global markets rebounded. MLPs may get back in fashion as oil prices continue to rise, while technology stocks have outperformed. Lastly, aerospace & defense stocks have received a boost from a potential rise in U.S. military spending.