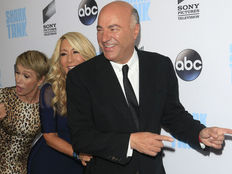 This week, investors took a pause from geopolitics despite a historic summit between the leaders of the U.S. and North Korea, turning their attention to the ETF market.

Shark Tank star and famous entrepreneur Kevin O’Leary launched a so-called global internet giants ETF, supplementing his suite of global dividend ETFs. Invesco PowerShares is second in the list as the ETF provider dropped “PowerShares” from its name. Copper is the third most popular asset, as the commodity lost some of its shine of late. A specific technology ETF and Argentina’s debacle close the list.

Kevin O’Leary, the star judge at CNBC’s Shark Tank, has launched a new ETF focused on high-growth internet companies. As a result, O’Leary’s firm O’Shares Investments has seen its traffic surge as much as 1080% in the past week. According to O’Shares, Global Internet Giants ETF (OGIG B-) allows investors to gain exposure to the largest global companies that make most of their revenues from the Internet and e-commerce. Employing a rules-based approach, (OGIG B-) will chiefly focus on companies that exhibit revenue growth of 20% to 35%.

The ETF portfolio consists of 53 holdings and counts household names Alibaba (BABA), Facebook, Amazon (AMZN) and Alphabet (GOOG) among its top holdings. The four companies collectively make up a quarter of the ETF’s stocks. At the same time, (OGIG B-) has lesser-known names such as Momo (MOMO), a Chinese social and entertainment platform, and WorkDay (WDAY), a human capital management software vendor.

Around 74% of the holdings operate in the technology sector and the rest in the consumer discretionary category. Geographically, more than half of the companies are located in the United States, while China counts 31% of the firms. (OGIG B-) currently has more than $25 million in assets.

Global Internet Giants is the sixth ETF launched by O’Leary, who also goes by his nickname Mr. Wonderful. The previous five ETFs are focused on dividend plays across different geographies, including Asia Pacific and Europe, and market capitalizations. O’Leary’s biggest ETF by assets under management is O’Shares FTSE US Quality Dividend (OUSA B+), with $430 million in total assets. (OUSA B+) has risen 25% since inception at the end of 2015.

Canadian-based ETF provider Invesco PowerShares is dropping the last part of its name to become simply Invesco. The firm, which provides the blockbuster tech ETF Invesco QQQ (QQQ B+), has seen its viewership rise 175% in the past week, well behind O’Shares Investments. Invesco announced the move in a press release on May 28 and the name change of its PowerShares ETFs will become effective on July 27. The investment objectives, strategies and ticker symbols will remain the same, the company said.

Invesco’s main product is technology-heavy (QQQ B+), which aims to mimic the performance of the Nasdaq Index. (QQQ B+) has around $65 billion in assets under management and the first five companies, Apple (AAPL), Amazon, Microsoft (MSFT) and Facebook collectively make up a quarter of the index. The second-biggest technology ETF, Technology Select Sector SPDR (XLK A), has $22 billion in AUM.

Invesco’s suite of ETFs is very close to reaching one trillion dollars in assets under management, with the rise helped by a 2017 acquisition of Guggenheim. Other important ETFs in Invesco’s portfolio are Invesco S&P 500 Equal Weight (RSP A-), with $15 billion in assets, and Invesco S&P 500 Low Volatility (SPLV A+), with $7 billion in total assets.

Copper has seen its viewership advance 142% this week, as investors focused on demand figures from China. United States Copper Index (CPER A-) has dropped more than 1% in the past five days due to worries of lower demand in China and an ongoing drama at the world’s largest mine in Chile. Year-to-date, (CPER A-) remains down nearly 2%, although it recovered a large part of its losses since the beginning of June.

For a deeper analysis of individual ETF investments such as (CPER A-) or (QQQ B+), use our ETF Analyzer tool. You can select ETFs by Category or Type as well as add individual ticker symbols to compare performance, expenses and dividend yield, among other metrics.

Credit indicators in China have been weakening of late, triggering fears the lack of liquidity may put pressure on demand and copper prices going forward. On the bright side, a labor strike at a copper mine in Escondida, Chile, is a live possibility, threatening to disrupt supplies. BHP, the Anglo-Australian miner, responded to the latest contract proposal from its workers’ union, prompting a new round of discussions that will likely last more than one month. The union proposed a 5% increase in pay along with a one-off bonus of $34,000.

The technology ETF provided by State Street, Technology Select Sector SPDR Fund (XLK A), has seen its viewership increase 139% this week, as the tech sector has left behind some recent drawbacks and surged to record highs. Indeed, (XLK A) has advanced nearly 3% this month, extending year-to-date gains to as much as 12%. For comparison, the benchmark S&P 500 (SPY A) is up around 4% since the beginning of the year.

The strong rally in technology stocks is unsurprising given the robust earnings across the board and high growth rates. Netflix (NFLX) is among the most loved firms from the index, nearly doubling since January 1. Amazon, with its incredible disrupting force, is up 43%, while scandal-plagued Facebook has gained more than 9%.

But the rally may come under pressure as the Federal Reserve increases interest rates and the European Central Bank is considering ending the free-money era. On Wednesday, the Fed increased its benchmark interest rate to 2% and signaled four hikes this year.

Argentina’s equities continue to head down although the intensity of the sell-off diminished considerably. Argentina has seen its viewership advance as much as 122% this week, taking the last place in the list. Global X MSCI Argentina (ARGT A-), one of the few ETFs exposed to Argentinian stocks, has dropped more than 1% in the past five days, extending year-to-date losses to more than 16%.

Slow-paced reforms combined with monetary policy mistakes have led to an abrupt drop in the value of the peso, which lost around 25% against the U.S. dollar. As a result, the central bank depleted foreign currency reserves to defend the currency but the move was not enough. On the bright side, Argentina secured a loan from the International Monetary Fund to the tune of $50 billion, which is expected to help it navigate the current difficult climate. But before staging a recovery, equities may continue their sell-off.

Use our Head-to-Head Comparison tool to compare two ETFs such as (ARGT A-) and (XLK A) on a variety of criteria such as performance, AUM, trading volume and expenses.

Kevin O’Leary’s O’Shares Investments has launched a new ETF focused on global internet giants, departing from its usual dividend strategies. Invesco PowerShares is dropping the last part of its name, while copper fell on China demand worries. Technology stocks surged to record highs, leaving behind recent problems stemmed from the Facebook data protection scandal. Finally, Argentina equities continued to drop but the light at the end of the tunnel is in sight after the country secured a $50 billion loan from the IMF.