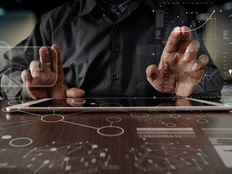 Investors have bought into the technology sector with fervor as markets enjoyed a brief period of tranquility just before politicians resumed their belligerent rhetoric.

U.S. President Trump stepped up trade brawls with its northern ally over the last few days, threatening to slap tariffs on Canadian cars and car parts. In financial markets, short volatility bets returned as speculators are wagering on derivatives to diversify their sources of return. Fourth on the list, the biotechnology sector attracted attention as several companies announced positive results from trials or plans to develop new drugs. China is closing the list as the country’s authorities are set to respond forcefully to any American tariff scheme.

Investors rushed into key index funds like the tech-heavy Invesco QQQ (QQQ B+), pushing it to new highs and spurring a rise in viewership of 283%. The somewhat serene economic backdrop, coupled with a strong performance from FAANG stocks provided support for a move to record levels in the industry’s main index, the Nasdaq. QQQ is just a little short of last week’s peak level, holding a firm 13.80% performance for the year.

Netflix (NFLX) joined Amazon (AMZN), Alphabet (GOOG) and Facebook in propping up the Invesco QQQ ETF over the last few days despite signs of strained relationships between the U.S. administration and various trade partners on tariff plans. Investors poured a solid $2 billion in inflows over the last 45 days into the ETF, hoping that the tech sector would dodge the nervousness caused by trade spats.

For a deeper analysis on individual ETF investments such as (EWC B+) or (QQQ B+), use our ETF Analyzer tool. You can select ETFs by Category or Type as well as add individual ticker symbols to compare performance, expenses and dividend yield, among other metrics.

The Federal Reserve’s decision last week to hike the benchmark interest rate by a quarter-point signaled confidence in the economy from policymakers. The additional two hikes announced were also seen as positive omens for the overall economic activity and helped set aside fears of a slowdown.

Another element backing the rise in tech indexes is market anticipation for large merger deals. Last week, a U.S. district court gave a favorable verdict regarding the unconditional merger of AT&T (T) and Time Warner (TWX). This is actually considered a watershed moment in the M&A industry as telecom-tech-media companies are more likely to merge in order to survive in a highly competitive environment.

Following a tense G7 meeting in Canada two weeks ago, President Trump continued to trade jabs with Canadian Prime Minister Trudeau in what seems to have evolved into a dangerous dispute over tariff plans. As a result, traffic to Canada more than doubled over the last week while investors kept a close eye on ETFs with exposure to the country’s economy. The iShares MSCI Canada ETF (EWC B+) suffered a 3% setback in just four days, adding to the already negative performance since the start of 2018.

The U.S. president added more fuel to the fire in a clash with the Canadian leader, pointing at the auto industry as the new target for increased tariffs. What started with tariffs on Canadian-produced steel and aluminum is menacing to expand to all corners of both economies with a devastating impact. An estimated 160,000 jobs would be affected by high tariffs on vehicles and auto parts, while further retaliatory measures are likely to put more pressure on the Canadian economy.

Almost 25% of the 17 million new vehicles sold in the U.S. last year were assembled in Canada or Mexico, with a combined worth of $89 billion per annum. A tariff plan would also hurt American automakers as the likes of Ford Motor (F) and General Motors (GM) ship up to 80% of their Ontario based production to the U.S. market. In addition to that, components of a wide variety of vehicles considered “America—made” come from Canada. Ontario would bear the brunt of further deterioration of trade relationship as manufacturing is key to the province’s economy.

Market Volatility Is Back on The Table

Volatility products like Barclays’s iPath S&P 500 VIX Short-Term Futures ETN (VXX A-) have been on investors’ screens over the last few months as they displayed some wild moves and caused severe damage to holders of short positions. The ETF ballooned in February while exhibiting violent moves in March and April, only to calm down more recently and return to levels last seen in December 2017.

Traffic to the sector surged by 91% as signs of investors returning to strategies with short volatility exposure have emerged in the derivatives market. Banks have steadily offloaded structured products that provide exposure to mutual funds. Hedge funds and high-net-worth individuals are replacing banks in betting against sizeable price swings on these mutual funds as they see recent bouts of nervousness as exaggerated.

In a similar manner, given mounting stress over the current credit cycle, banks are eager to find new ways in their quest to hedge debt exposures. Futures tied to U.S. corporate bond indexes are back in fashion and money managers prove more than willing to load on these products as they collect the premium, thus adding a fresh source of revenue. Of course, such bets can backfire and trigger margin calls if investors overexpose themselves in leveraging such positions like they did in February.

Interest in the biotechnology sector has swelled by 83% over the last week as investors took note of the encouraging results of various drug trials.

SPDR S&P Biotech ETF (XBI A) broke the $100 threshold, driving the year-to-date performance to 19.18% as its top holding skyrocketed. Sarepta Therapeutics (SRPT) jumped by 55% on promising gene therapy results for Duchenne muscular dystrophy (DMD), a disease that damages muscular development. Sarepta’s gene therapy is regarded as an unprecedented advancement in the treatment of DMD as it dramatically improves a patient’s capacity to produce the protein needed in muscle development.

Another biotech company that captured investors’ attention lately is SAGE Therapeutics (SAGE) with an FDA report for an expedite development of its major depressive disorder (MDD) and postpartum depression (PPD) treatment, SAGE-217. This would be the final phase of trials before receiving the right to file a New Drug Application with the FDA and potentially market the drug early next year.

Use our Head-to-Head Comparison tool to compare two ETFs such as (XBI A) and (VXX A-) on a variety of criteria such as performance, AUM, trading volume and expenses.

China shows no sign of backing down in its sour trade bickering with the U.S., prompting a climb in traffic by 81% this week.

The U.S. president made good on his promise and signed an order that imposes a 25% duty on $50 billion worth of Chinese imports. Additionally, plans to enact new restrictions on Chinese investments in America as well as certain types of advanced technology that U.S. firms can export to Beijing will be released later this month.

In a tit-for-tat response, China’s Commerce Ministry released a statement saying a new round of tariffs on U.S. goods will be imposed starting July 6, targeting a host of products from soybeans and salmon to electric cars and whiskey. Insisting that this harsh path is mutually painful, Chinese authorities said that previous agreements to buy $70 billion worth of U.S. agricultural and energy products will be nullified when the new tariffs go into effect.

The retaliation measures only managed to anger the White House, which directed the U.S. trade representative to prepare new tariffs on $200 billion of Chinese imports. This triggered a sell-off in the largest ETF with exposure to Chinese companies, the iShares China Large-Cap ETF (FXI A), which tumbled 8.5% in the course of two weeks, setting a new low for the year.

Investors are kept on their toes by continuous trade-related news while also pursuing investment opportunities, technology ETF Invesco QQQ being the current favorite due to the strong performance of its holdings. On the political side, Canada and China are set to endure further punitive measures as the U.S. administration is trying to win a dangerous game in its crusade to lower the country’s trade deficit. On a different front, volatility eased in recent weeks as markets got accustomed to trade-related stories, while money managers have found new ways to generate profits by adding complex wagers to their portfolios. Finally, biotechnology emerged on investors’ radars following promising trial results on their groundbreaking treatments.