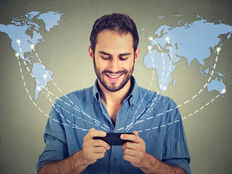 A revamped communications sector within the S&P 500 made its debut on Monday, following the largest overhaul of Wall Street’s broad business sectors.

Emerging markets continued to trend due to mounting trade tensions between the U.S. and China as well as shadow-banking debt woes in India. On the commodities side, U.S. natural gas prices spiked to nine-month highs despite Hurricane Florence. Aerospace and defense stocks trended thanks to an impending boost in spending for various defense programs by the Trump administration, while financial equities closed the list.

Check out our previous trends edition at Trending: Emerging Markets Deeper Into Bear Territory After Trump’s Remarks on Tariffs.

The reorganization of S&P Dow Jones Indices became effective this Monday and affected a total of 23 companies worth $2.7 trillion in market capitalization. Although it was announced last year, the change caught investor attention mainly because it involves tech giants like Alphabet (GOOG), Facebook and Netflix (NFLX). As such, the creation of the communication services sector made interest in “communications equities”: https://etfdb.com/etfdb-category/communications-equities/ surged by 117% as these stocks are set to gain traction amongst money managers once portfolios get rebalanced accordingly.

The reshuffling is meant to reflect how tech, media and consumer discretionary have all evolved. The telecom sector will go up from weighting 2% of the entire S&P 500 to nearly 10% under its new communication services tag. On the other hand, losing high-profile companies, the technology sector will fall to 20% weighting, while consumer discretionary will shed only about 2%, coming down from 13% to 11% of the S&P 500, at current market prices.

The newly created communication services sector is set to attract new funds as investors seek access to those stocks that dropped out of the other indexes. Trading at 18.7 times forward earnings, the sector carries a higher valuation when compared to the former telecom sector and will likely shift from a value-only basis to a growth tilt.

Investors who seek exposure to both high dividend stocks, as well as fast-growing internet or media companies, will target the Communication Services Select Sector SPDR Fund (XLC). The ETF was launched in June and tracks the performance of the Communication Services Select Sector Index. While still in the red since inception, it has performed well after the stock shuffle came into effect, gaining in each of the last three trading sessions and 2% for the week.

Once markets cooled from serious trepidations coming from Argentina and Turkey, it seemed emerging markets can take a breather and enjoy the much-needed inflows. Unfortunately, the U.S. imposition of levies on an additional $200 billion of Chinese goods coupled with a shadow-banking imbroglio in India sparked worries about emerging markets again. The MSCI Emerging Market Index is still capturing investor attention, with its traffic rising by 44% over the last week.

Asia’s third-largest economy is engulfed in huge debt burdens in the non-banking financial world as the “systemically important” Infrastructure Leasing & Financial Services Ltd. (IL&FS) missed payments on more than five of its obligations over the last two months. The company seeks to cut its $12.6 billion debt by selling $4.2 billion in assets. Investor angst caused a sharp selloff in the benchmark stock index S&P BSE Sensex on Friday, from 1% gain to a decline of as much as 3%. The same day, IL&FS stated it couldn’t make interest payments on three non-convertible notes despite being worth only $5.1 million.

On the trade front, the Chinese authorities refused to carry further negotiations with their American partners on trade issues as long as President Trump continues to threat with ever-growing levies. About $200 billion of Chinese goods are targeted with a 10% tariff starting this Monday while the level is set to reach 25% in January 2019. China responded with duties ranging from 5%-10% on a total of 5,207 U.S. products worth $60 billion.

Worried investors are looking at Vanguard FTSE Emerging Markets ETF (VWO A) as a gauge of emerging markets performance. Down 10.4% since January, the ETF has also seen sizeable outflows.

Use our Head-to-Head Comparison tool to compare two ETFs such as (VWO A) and (EEM A-) on a variety of criteria such as performance, AUM, trading volume and expenses.

Natural gas futures surged to levels not seen since January despite a forecasted fall in demand as a result of Hurricane Florence disruptions. The developments in natural gas led to a surge in traffic by 44%.

The bullish factor for natural gas is the low inventory figures, now 18% below the five-year average. Measured in billion cubic feet (BCF), the U.S. natural gas stocks have reached 2,722 BCF, adding 86 BCF on the last report. Weather and consumption added fuel to prices as January saw record heating demand, April was the coolest in 20 years, while July prompted the highest amount of gas ever used for power generation, averaging 37 BCF per day. In addition, exports to Mexico surged to record highs, consistently passing 5 BCF per day for the first time ever.

United States Natural Gas Fund (UNG B-) tracks the price of the commodity and performed decently this year, up by 5.6%. While it may have retraced some of the gains made recently, fundamentals point to a continuation of the uptrend due to high winter demand from the residential sector, which typically spikes by 55% during cold months.

For a deeper analysis on individual ETF investments such as (UNG B-) or (XLC), use our ETF Analyzer tool. You can select ETFs by Category or Type as well as add individual ticker symbols to compare performance, expenses and dividend yield, among other metrics.

Aerospace and defense are in the news largely due to a ramp up in military spending once the U.S. House of Representatives passes an $854 billion bill this Wednesday. As such, a move from lawmakers was expected by the investor community; aerospace and defense saw its traffic rise by 35% over the last few days. The bill grants $674.4 billion in defense operations – a $17 billion boost over 2018 levels.

On the private side, the Pentagon announced that a $1.5 billion modification was awarded to Raytheon in regard to a contract for Patriot missile systems that should be installed in Poland.

Investors have the iShares U.S. Aerospace & Defense ETF (ITA B) at hand when considering a relatively safe bet on a sector set to benefit from government demand. The ETF broke the range that it traded in for most of the year and now sits 13.8% higher when compared to the start of 2018. It should be noted that it has been rising steadily since mid-2016, with an impressive 10% bump on the day Donald Trump was elected.

The third rate hike for the year did little to support financial equities as it was already priced in by markets when the Federal Reserve made the announcement. Investors turned to the financial sector prior to the move as a rate hike is generally regarded as positive for banking profits. Still, traffic in the sector only ascended by 33%, a number that shows a relatively complacent investor attitude regarding banking stocks.

However, the Fed signaled one more hike in 2018 and three in 2019 in a gradual path toward a neutral monetary policy. The banking sector should only have to gain in the medium- and long-term as liquidity levels are still high and yields are also on the rise, despite a dip following the Fed statement. Financial Select Sector SPDR Fund (XLF A) descended from 5-month highs on the back of a small drop in Treasury yields but remains unchanged for the year.

Some tech behemoths moved into a remodeled S&P 500 communication services sector, spurring investor interest in a once forgotten corner of the market. On the international front, emerging markets continue to struggle with trade strains, a strong U.S. dollar and a default crisis in India’s shadow-banking sector. U.S. natural gas jumped due to record demand coupled with reduced inventories, while aerospace and defense enjoyed inflows thanks to a ramp up in military spending. Lastly, financial equities are poised to benefit from rising rates as the Fed’s hiking cycle should provide thrust to banking profitability.

FMET Makes It Simple to Take Long View of Metaverse