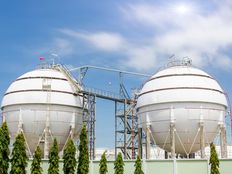 U.S. natural gas had a wild ride over the past week as investors were caught off guard by updated weather forecasts as well as reduced stocks. Oil moved in the opposite direction for the better part of the month as glut worries took prices back to October 2017 levels. On the currencies front, the U.S. dollar continues its march against the troubled euro and British pound. Last week has been mostly about the energy sector so leading companies in the field have trended accordingly. Investment grade corporate bonds closed the list as investors reevaluate the risk of placing funds in such assets.

Check out our previous Trends edition at Trending: Investors Steer Towards Dividend Yields Amid Market Turmoil.

Energy markets had a rough November as both oil and natural gas made abrupt moves that surprised investors. Natural Gas futures for December jumped last week by 18% in what was the biggest daily percentage gain in 14 years. This prompted a 205% rise in traffic for the sector as investors were shocked by the magnitude of the blow.

The upsurge happened on record daily volume of more than 1.2 million contracts, CME Group stated. Analysts blame the boom in prices on several factors, including short-term weather forecasts that were adjusted for colder temperatures. Another factor was the 3.208 trillion cubic feet of natural gas in U.S. storage facilities, the lowest level in 15 years for the first week of November. Traders shorting natural gas were blown away as prices rose, forcing them to buy more gas in order to cover their short positions, a snowball effect that drove prices up by 20% in intra-day trading on November 14.

The short squeeze reversed the next day as prices came down by 17%, the largest one-day drop in 15 years as China pledged a 20% boost in gas supply as a measure to meet natural gas demand in the country.

The wild ride in natural gas prices seems far from over and investors who want to gain exposure to the commodity can do so by choosing VelocityShares 3x Long Natural Gas (UGAZ C+) for short-term bets. The ETF offers 3x daily leverage to natural gas prices and returned 133% for the year with 84% since the start of the month. For investors with a short bias for natural gas, VelocityShares 3x Inverse Natural Gas (DGAZ C) offers the exact opposite opportunity. This ETF is best suited for those who believe that a mild winter is more probable, caused by El Niño conditions, coupled with a wave of profit-taking by bullish hedge funds.

Oil has steadily moved lower since its four-year peak recorded at the start of October. What seemed like a highly anticipated correction, turned into a move driven by a concerning discrepancy between supply and demand. This further generated liquidations of large bullish positions by money managers, which sank prices by 7% on November 13, the largest daily loss in three years. The event caught investors’ attention and upped traffic for leveraged oil ETFs by 124%.

Weakening global oil demand as a result of decelerating economic activity in Asia and Europe, rising production from the OPEC and the U.S. as well as the seasonal reduction in oil consumption during the winter season all triggered a sell-off in the commodity. Both the International Energy Agency and OPEC set a grim outlook for oil prices in their latest reports as they expect lower demand growth, and highlighted the oversupply caused by high U.S. crude production. U.S. drillers are adding rigs again, while the daily oil production hit a record 11.7 million barrels, according to the latest Energy Information Administration report.

President Trump’s call on OPEC to keep production at current levels prompted a swift reaction from Saudi Arabia, the OPEC leader, stating that the cartel may dial back its oil production by one million barrels per day. However, the 10 million barrel increase in U.S. crude stocks continues to weigh on prices.

Leveraged oil ETFs offer the benefit of exploiting these large moves without complicating trading through futures and options trading. Products like ProShares UltraShort Bloomberg Crude Oil (SCO A+) are the go-to vehicles for investors with a short-term bearish outlook. It posted a 57% rise for the last 30-day period and 7% for the last five trading sessions.

Use our Head-to-Head Comparison tool to compare two ETFs such as (SCO A+) and (DGAZ C) on a variety of criteria such as performance, AUM, trading volume and expenses.

A relentless Federal Reserve in its rate hike cycle has propped up the greenback by 4.91% for the year, as shown by the U.S. Dollar Index. The index is a benchmark indicator of value against a basket of six currencies, the most important being the euro, the Japanese yen and the pound sterling. Last week, as global rates continued to diverge, interest in the dollar increased by 50%.

As economies in Europe falter and its engine, Germany, reported the first GDP contraction in three-and-a-half years, trust in a more hawkish ECB dwindles. The German economy shrank by 0.2% in the three months to September 2018 on declines in exports and household consumption. As such, speculation that the ECB will consider more stimulus for banks while the U.S. will continue to hike rates is causing a widening spread between U.S. and European debt yields, enough for a widespread carry trade to take place and continue to support the buck.

For a bullish perspective on the U.S. currency, Invesco DB US Dollar Index Bullish Fund (UUP B) offers liquidity and returned 7.45% since the start of 2018. The bumpy road toward a clean divorce between the EU and the U.K. may reinforce the dollar’s strength.

For a deeper analysis on individual ETF investments such as (UUP B) or (FXI A), use our ETF Analyzer tool. You can select ETFs by Category or Type as well as add individual ticker symbols to compare performance, expenses and dividend yield, among other metrics.

Investors are fleeing energy stocks faster than any other, rebuffed by a global rout in equities, lower demand for oil and renewed trade tensions. As both oil and natural gas moved wildly, investors looked into energy products and caused a climb in viewership by 22% for the week.

Outflows for the industry leader Energy Select Sector SPDR Fund (XLE A) reached $560 million for the last 50 days, when oil peaked. The sell-off in stocks on heavy trading did not help, while the latest 6% dive in oil prices caused a liquidation trade.

However, signs of exhaustion may have emerged as net-long positions have been cleared, prompting investors to pour back funds into XLE in November. The ETF has a negative performance for the month, down 1.76%.

U.S. corporate debt reached the staggering $9 trillion level this month, while rate hikes pose a real threat to investment grade debt if the economy decelerates. A real angst rises in the world of investment-grade as the pace of corporate earnings growth slows. Traffic in the sector rose by only 18% this last week as it seems like a manageable issue but nonetheless worth keeping an eye on.

The most troubling aspect for investors is the high risk of downgrades for the lowest investment-grade rating debt. Moody’s Investors Service warned last week that the highest volume of debt sits in its lowest investment-grade rung, the Baa, with $2.83 trillion for the third quarter. Within the Baa rating, the lowest Baa3 swelled to a record of $705 billion in the third quarter, a 140% rise compared to the same quarter of 2007.

A roller coaster in natural gas prices took investors by surprise, causing stress in energy markets. Oil’s downtrend persisted and attracted bearish bets through leveraged products as investors are trying to squeeze more from the declining trend. The U.S. dollar benefits from the carry trade sparked by the divergence in monetary policies between the Fed and the ECB. The energy sector is experiencing high bouts of volatility amid growing uncertainty in the oil and natural gas markets. Lastly, investment-grade corporate debt may be the elephant in the room for U.S. stocks as the sheer volume of low-grade debt is at risk of falling to junk.