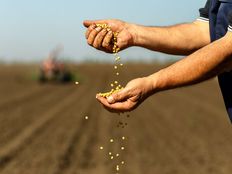 Optimism after the G20 Trump-Xi truce drove up soybean prices as the Chinese are expected to resume orders for U.S. agricultural products.

Master Limited Partnerships are looking forward to the upcoming OPEC+ meeting this week in Vienna. On the technology side, cloud computing enjoyed rejuvenated investor interest following solid earnings from big players. China and various agricultural commodities like sorghum and corn made this week’s list as the U.S.-China truce should propel U.S. exports to 2017 levels and beyond.

Soybeans on the Rise

The White House announced a 90-day trade truce that opens a period of negotiations between the U.S. and China. The Trump-Xi meeting in Argentina last week was expected by agricultural markets especially because products like soybeans have been battered in 2018 as the Chinese virtually stopped buying the grain from U.S. farmers. Soybean prices spiked with the news, prompting a 171% surge in traffic.

China is the largest soybean consumer in the world, by far, with 60% of the oilseed traded worldwide. In 2017, the Asian nation imported 32.9 million tons of soybean from the U.S., worth $12.25 billion and accounting for 34% of the total purchases. The Chinese slashed orders for U.S. soybeans in April and bought from Canada and Brazil in order to feed its domestic processors.

Now, a shift in sentiment is propping soybeans and producers to look forward to Chinese orders. The 2018 harvest has been piling up in storages all across the Midwest as China contracted for delivery this year a little over half a million ton of U.S. beans, a whopping 95% drop from the 20 million tons it booked last year at this time.

Teucrium Soybean (SOYB B) is directly linked to soybean prices and should be used as an instrument to play this political event in the short term. The ETF dropped by 21% from its March highs as it follows futures prices for the commodity. It has established a floor over the last five months with breakout prospects over this month and January.

Despite being tied to energy prices, Master Limited Partnerships were salvaged by a record production in U.S. crude of 11,700 barrels per day. These are more connected to business velocity as they primarily deal with the distribution and storage of energy products and less reliant on the commodities market. MLPs were also jolted by the Trump-Xi meeting as investors envisage a China that is more open to energy imports. Viewership in the sector almost doubled over the last week as investors hope for a resurgence after a difficult year.

Russian President Vladimir Putin also stated that his country plans on extending its cooperation on production cuts with OPEC into 2019. This matters as OPEC meeting will take place this week in Vienna and is widely expected to bring the needed cuts in production that will help stabilize oil prices. Analysts expect supply cuts anywhere from 1 to 1.4 million barrels a day with Saudi Arabia and Russia bearing the largest share of the curb.

Bringing another bump to U.S. crude, Canadian province of Alberta will also reduce its oil output by over 300.000 barrels per day in order to both clear the excess supply in storage and provide support for the declining prices.

Alerian MLP ETF (AMLP A-) is the largest investment vehicle of its nature and provides exposure to a basket of infrastructure MLPs, yielding between 6% and 8% on a consistent basis. It has declined for the year by 8% but should be an attractive option for those looking towards an increase in Chinese oil and LNG imports while also holding up well during rising rates environments.

Use our Head-to-Head Comparison tool to compare two ETFs such as (AMLP A-) and (SOYB B) on a variety of criteria such as performance, AUM, trading volume and expenses.

The broad market sell-off took down cloud companies to their lowest in six months as fears regarding the global economy and the U.S.-Sino trade war escalated. However, business transformation did not slow down cloud enterprises and blowout earnings from the likes of VMware (VMW) or Salesforce.com (CRM) helped dissipate such concerns. Cloud computing traffic rose by 84% over the last week.

These companies have risen rapidly for the last two years and thus were the hardest hit by sellers running for the exit doors in the October-November sell-off. Then earnings came out and the sector rebuffed all doubts regarding the cloud industry with strong results. Virtualization software giant VMware reported annual revenue growth of 14% and, with license revenue advancing 17%. Guidance for the next year was also encouraging, the company estimating a revenue increase of 12%. The largest customer relationship management software firm, Salesforce.com, crushed estimates with 26% revenue growth.

First Trust ISE Cloud Computing Index Fund (SKYY B) offers exposure to both VMware and Salesforce.com and performed rather well over the last two weeks, posting a 5.3% ascent. It also holds well for the year, having risen by 11.49% to date.

For a deeper analysis on individual ETF investments such as (AMLP A-) or (SKYY B), use our ETF Analyzer Tool. You can select ETFs by Category or Type as well as add individual ticker symbols to compare performance, expenses and dividend yield, among other metrics.

The G20 Trump-Xi meeting spurred optimism not only in the soybean market but also for various feed grains and even pork. The $24 billion worth of U.S. agricultural products exported last year to China should slowly reverse the 2018 steep decline as Chinese authorities already began preparations for lifting the 25% tariff and restarting imports, according to a Bloomberg report issued on December 5. As a result, traffic in agricultural commodities climbed by 51% over the last week as the news is still being digested by investors.

Aside from soybeans, sorghum has been stung by the Chinese import halt and is in need of buyers. Over the last five seasons, around 60% of sorghum was exported each year and 83% of exports were to China. By the end of November, sorghum sales for the current marketing year are at the lowest levels in more than a decade.

Animal feed additives like distillers’ dried grains and pork may also be on the menu for Chinese businesses and state companies. Pork is in high demand already, as sales hit 3,348 tons for the year and are set to reach 9,384 tons in 2019 as a deadly outbreak of African Swine Fever took a toll on Chinese farms.

Invesco DB Agriculture Fund (DBA A) dived 7.84% since the start of the year and could be ripe for an upswing if positive scenarios become reality in 2019.

In return for their willingness to buy American products, the Chinese have gained a 90-day grace period for the U.S. tariff increase planned for January 1. The 10% to 25% hike in levies on $200 billion of Chinese exports will go into effect in March if no deal is reached after the three-month trade truce is over. This arrangement has spurred a 23% advance in interest for China because a deal is widely expected at the end of this period, if the rewritten NAFTA is to be taken as an example.

One of the goods that will more than likely be imported by the Chinese is oil as prices are low and the 90-day window is a perfect play for companies to load up their storage facilities. The U.S. also stands to win a wider access to Chinese markets with various business barriers set to be annulled.

Investing in China through an ETF like iShares China Large-Cap ETF (FXI A) is favored as it lost only 9% in value this year, far better than its peers. Its exposure to corporations with a vast local footprint bodes well for the continuation of GDP expansion, particularly if 25% levies are avoided. By comparison, the Shanghai Composite Index has fallen 22% since the beginning of the year.

This G20 meeting in Argentina spurred a broad market rally as the Sino-U.S. trade tensions deescalated amid a 90-day truce between the two world powers. Soybeans reacted strongly, investors viewing the commodity as the main beneficiary of the Chinese returning to U.S. agricultural markets. MLPs stand to win from the OPEC plus gathering as oil cuts from major players are expected to support oil prices and underpin energy-related businesses. Cloud computing shook off the anxiety related to technology and a possible slowdown in orders with supportive earnings. U.S. sorghum, corn, pork and other agricultural goods are due for a comeback on the shopping list of Chinese importers. China as an investment destination closed the list as it managed to temporarily avoid increased tariffs on its goods destined for the U.S.