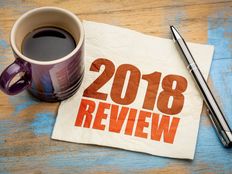 This is a special edition of the ETF Database scorecard that delves into the annual performance of some of the key funds. The performance is measured from January 1 to November 30.

To see how these indices performed a week before last, check out ETF Scorecard: December 7 Edition.

Use our Head-to-Head Comparison tool to compare two ETFs such as (XLE A) and (XLF A) on a variety of criteria such as performance, AUM, trading volume and expenses.