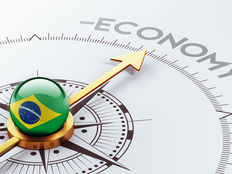 Brazil entered the era of right-wing nationalism, as Jair Bolsonaro became president of the Republic at the start of 2019.

Metals spiked in December as the stock market crashed. Investors looking for safety chose silver and pushed its price to five-month highs. Alternative energy equities ranked third last week as a host of contracts were announced. Marijuana ETFs had a booming year and the world is getting ready to jump on the trend in 2019. Battered European equities breathed a sigh in relief after Italy pledged to reduce its massive deficit while also imposing a few social reforms.

Check our previous Trends edition at Annual Review of the ETF Trends.

Brazilians Have High Expectations From Bolsonaro

Since he was elected at the end of October, Jair Bolsonaro made investors optimistic about Brazil’s economy as he signaled openness to foreign markets and pledged to reduce the burdening budget deficit. The start of his term sparked a 49% rise in viewership for Brazilian ETFs as investors are keeping an eye on the outperforming Brazilian markets, especially as U.S. and European stocks are correcting.

The new president pledged to put the world’s eighth-largest economy back on a sustainable path, promising to cut the expensive bureaucracy that hinders business developments by reducing the high amount of regulation bodies from 29 to 15.

On the investment side, Bolsonaro plans to build hydroelectric dams in the Amazon and open up the world’s biggest forest to mining. Environmental activists fear that such moves would actually hurt the Brazilian economy over the long term but the new administration insists on the benefits of massive investments like reducing unemployment and raising the living standard.

The new economic team headed by investment banker Paulo Guedes will try to balance Brazil’s unsustainable budget deficit through a $260 billion privatization plan. The overhaul of the social security pension system is a thorny issue and the right-wing president proposed to increase the retirement age from an average of 58 to 61. Unemployment is another problem that needs to be solved, as some 13 million Brazilians are jobless. A jumpstart of economic activity could solve the issue if GDP growth rises well above the 1.3% estimated for 2018.

The largest product with exposure to the Brazilian economy, iShares MSCI Brazil ETF (EWZ A-), is faring much better than its developed-world peers. The ETF is on an uptrend, currently sitting on a 31.3% gain since its September low. Over the last 12 months (EWZ A-) is still 2.5% under the water but has surged 9.5% in the last five trading days.

Investors took the opportunity of a disappointing stock market and flocked into gold and silver as a means to protect their portfolios and reduce risk. Leveraged silver ETFs are on the rise as the underlying precious metal reached a six-month high. Traffic to silver increased by 47% over the last week.

Silver touched $16.68 per ounce on the first trading day of 2019 in New York, the highest level since mid-July. Helped by a soft dollar and a strong decline in stocks, silver made quite a comeback from the November lows of $13.92 per ounce, a rise in price of 12.3% in a 45-day span.

Weaker economic data for the European Union, lingering concerns about the U.S. government’s shutdown as well as fears of a backtrack in the Federal Reserve’s hawkish stance all hindered investor sentiment.

Financial markets are also anticipating a slowdown in U.S. economic activity as a result of protectionist actions from the Trump Administration. The Sino-U.S. trade truce struck at the end of November had a positive impact but is now showing signs of fading.

The U.S. government is likely to remain shut for the remainder of the week as President Trump shows no signs of budging on his demand for border wall funding. Analysts estimate a cost of $6.5 billion per week, mainly because of downstream economic effects.

Investors with a tilt toward risk-taking have VelocityShares 3x Long Silver ETN (USLV C) to take advantage of a prolonged market weakness in stocks. The ETF soared nearly 30% over the last month and 15% in the last five trading days.

Use our Head-to-Head Comparison tool to compare two ETFs such as (USLV C) and (EWZ A-) on a variety of criteria such as performance, AUM, trading volume and expenses.

The largest wind turbine company in the world, Vestas, announced at the end of December that it signed a contract for the 198 megawatt Kamensko-Krasnosulinsky project, the largest wind park in Russia. The investment will comprise 52 turbines in what represents a big step toward the country’s goal of a strong local renewable energy sector.

Another significant project made public over the last few days is the 328 megawatt order from Norway and the 122 megawatt contract from MidAmerican Energy, a subsidiary of Berkshire Hathaway, for the Wind XI project in Iowa.

The Danish corporation employing more than 24,000 people and contracts in 79 countries also made moves in the Asian market with a 200 megawatt order for the Fengjigou project in China’s Ningxia province.

The iShares Global Clean Energy (ICLN A+) has Vestas as its second holding, weighing 6.07% of the product. The ETF reacted to the positive news and climbed 3.8% in the last five days.

Last year was entertaining for recreational drug companies as Canadian stars like Tilray (TLRY), Cronos Group and Canopy Growth made the headlines. Now the world is expecting more countries to allow medical marijuana as a tradable product. As a result, interest in the marijuana sector climbed by 46% over the last week.

Thailand adopted a resolution to allow marijuana use for medicinal and research purposes in a unanimous vote of the National Legislative Assembly last Tuesday. Although possession of marijuana continues to be illegal, the groundbreaking legal steps point to a wider acceptance of the drug, with Malaysia regarded as the next country to move toward legalizing the medicinal use of the green plant.

Israel was also keen on passing a law on marijuana exports and it did so last Tuesday when its Parliament voted unanimously for a bill that permits the export of medical cannabis.

These developments may announce 2019 as another exciting year for investors – ETFMG Alternative Harvest ETF (MJ B-) being at the forefront when it comes to exposure to cannabis companies. The ETF is largely exposed to North American companies in the industry but could add more European and Asian players in the near future. For the last five days, the ETF gained 11.6% after nearly two months of losses.

For a deeper analysis on individual ETF investments such as (ICLN A+) or (MJ B-), use our ETF Analyzer tool:http://etfdb.com/etf-analyzer/. You can select ETFs by Category or Type as well as add individual ticker symbols to compare performance, expenses and dividend yield, among other metrics.

Politics is set to be the main driver for European equities in 2019.

Italy’s vote on a revised budget moved investor attention toward Europe at the end of 2018 and sparked a traffic surge of 36% for the sector. The Italian Parliament passed a budget plan that meets the EU’s requirements after a series of jabs traded between Rome and Brussels over the last two months. The bill states a lowered budget deficit, from 2.4% of GDP to 2.04%, a rebate worth roughly $12 billion. Among the most important points of the new plan, tax cuts for workers earning less than $75,000 per year and a reduction of the retirement age from 67 to 62 for workers who have contributed to the pension system for 38 years are set to go into effect in 2019. Also, a new $8.2 billion income support scheme for Italy’s poorest families should help kick-start economic growth.

Vanguard FTSE Europe ETF (VGK A) offers exposure to the region’s largest companies and is widely regarded as a benchmark for the European economy. The ETF lost 18.8% over the last 12 months but should recover once and if the Brexit saga is sealed with a business favorable agreement in March 2019.

The newly sworn in Brazilian President Jair Bolsonaro is riding a wave of optimism but is also expected to deliver on his promises to rejuvenate the sluggish South American economy. Metals enjoyed inflows over the last month as investors seek to gain back some of the losses inflicted by a sliding stock market and poured into leveraged ETFs linked to silver. Alternative energy got a boost from wind turbine contracts spanning from the U.S. to Norway and China. Recreational drug companies prepare for another exciting year with more countries signaling openness toward legalizing marijuana products. Lastly, European equities took a breather as Italy passed a budget plan that lowers its wide deficit.