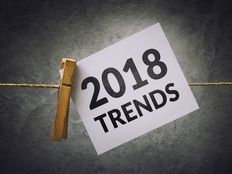 Annual Review of the ETF Trends

For the better part of 2018, markets have been under the spell of technology stocks. And FAANGs were at the helm, bewildering investors with stunning earnings, but also shocking them with data breach scandals or disappointing guidance.

Emerging markets have had a rough year. Turkey and Argentina were caught in a currency storm bot, seeing their notes sink abruptly. Aluminum and steel prices spiked on President Trump’s tariffs announcement, while oil reached four-year highs on Iran sanctions only to reverse on supply glut fears. Benchmark treasuries hit seven-year highs amid robust economic data and ultra-low unemployment. Last but not least, a refurbished NAFTA deal gave the U.S. administration an impulse to push further in its attempt to reduce the massive trade gap it holds with China.

The Year Markets Followed Technology to the Moon and Back

Weighing 21% of the S&P 500, the technology sector has the biggest clout over markets in nearly two decades. The most beloved in the sector, the FAANG stocks were constantly on investors’ monitors in 2018 with their staggering performances or horrible flops.

An impressive January laid the foundation for a robust year that never came for the tech sector and especially the FAANGs. February’s volatility and the Dow Jones (DIA B+) 1,500 point plunge, the largest on record, spooked investors as fears of rising yields and their impact on future earnings briefly eclipsed the positive effect of the fiscal stimulus. President Trump’s $1.5 trillion tax cut and $300 billion in federal spending lifted U.S. economic growth to an annualized 3.5%, surpassing EU’s 1.9%.

Tech behemoths continued to take hits from escalating trade tensions as the likes of Apple (AAPL) brought 20% of its revenues from China in 2017 while Microsoft (MSFT) sourced half of its products from the Asian country. Although insulated from a sales perspective, Facebook (FB), Amazon (AMZN), Netflix (NFLX) and Google (GOOG) stand to lose big if a full-blown trade war erupts and China retaliates much harder. This would cause a slowdown in economic activity inside the U.S. and possibly the European Union, hurting sales.

October and November brought down the tech sector to its knees, all companies in the acronym entering bear territory as of November 26. Facebook started suffering much earlier, a data breach scandal that sent tremors in the social media world managing to wipe 10% of its market cap. Much worse was the 19% drop on July 26 as the California-based company reported a miss on revenue and global daily active users. Sliced orders for Apple, lowered guidance for Amazon and Netflix and bubble-like valuations for all the tech giants were cited by analysts as reasons for the recent drop.

On a brighter note, artificial intelligence grows on every level. 52% of businesses in the U.S. and EU are actively investing in AI, while 31% are planning to do so in the near future. Machine learning models are set to cause major disruptions in nearly all areas of the economy. Amazon and Apple are investing in their virtual agents and speech recognition. AI-optimized silicon chips are employed by Google and IBM (IBM) while General Electric (GE) is using digital twin/AI modeling to monitor its engines and turbines in order to predict failures with cloud-hosted software models of the machines.

The turmoil in emerging markets began with the February rout in stocks and deepened when U.S. treasury yields started to rise. Among the hardest hit were Turkey, with a 35% fall in value for its lira, and Argentina, which saw its peso plunge by a stupefying 106% against the dollar.

Despite following different paths, both countries saw inflation popping to unbearable levels and had to intervene by hiking interest rates in order to stop the bleeding. The Argentinian central bank took interest rates to a world high of 60% and turned to the International Monetary Fund for a $50 billion standby accord. This was coupled with planned budget cuts that prompted hundreds of thousands to take to the streets of Buenos Aires in a demonstration that echoed the 2001 protests.

Turkey, on the other hand, having the authoritarian president Recep Tayyip Erdogan in charge, took steps to avoid raising interest rates to dangerous levels. The fuel for its economic ascent has been cheap credit and Turkey depends on low borrowing costs. As such, businesses are dependent on bank money as the lending boom under Erdogan’s watch made Turkey a regional economic powerhouse. Even so, interest rates are currently sitting at 24% while inflation trends even higher, at 25.24% for the month of October on a year-over-year basis, the highest rate in 15 years.

For a deeper analysis on individual ETF investments such as (UUP B) or (FXI A), use our ETF Analyzer Tool. You can select ETFs by Category or Type as well as add individual ticker symbols to compare performance, expenses, and dividend yield among other metrics.

Commodities Were Most Vulnerable to Political Spats

Steel and aluminum were the first assets to be hit by tariffs as Donald Trump announced in March a levy of 25% on steel imports and 10% on aluminum. Tariffs went into effect on June 1 but prices of aluminum soared 30% in April and declined ever since. Worries of waning demand in emerging markets and the prospect of a deteriorating global trade environment took a toll on commodities.

Despite a new deal with Canada and Mexico, tariffs are still in effect and managed to prove lucrative for U.S. coffers. From June to October, the federal government collected $2.3 billion from steel importers while $600 million came from businesses getting aluminum into the country. The numbers are set to hit $5.8 billion and $1.7 billion respectively if import levels remain the same as in 2017.

Crude oil was on an upward slope for most of 2018 and until October there was little to frighten investors. Both West Texas Intermediate and Brent crude futures hit four-year highs earlier this year as the U.S. re-imposed sanctions on Iran, a move that was meant to cut 1.5 million barrels a day from the global output. But oil supply, especially from the U.S., has been growing faster than demand, a buildup in stocks followed and investors took prices down 34% for WTI and 31% for Brent.

U.S. Treasury Yields on the Rise

Treasuries have caused serious headaches to indebted nations in 2018, and especially to emerging markets with high dollar-denominated debt levels. The yield on the benchmark 10-year Treasury note pierced through the 3% threshold in May to reach the highest level in seven years. Seen as a barometer for mortgage rates and financial instruments, the 10-year yield spiked again in October to 3.25% as the unemployment rate dropped to 3.7%, the lowest since 1969.

Fundamentals in the U.S. economy remained robust, and average hourly earnings rose to 3.1% on an annual basis, the most since 2009 while inflation is still on Federal Reserve’s path with a 2.5% for the month of October. As a result, the U.S. central bank raised rates three times in 2018 to 2.25%, and could hike once more in December. A critic of the Federal Reserve’s hiking path, President Trump sees the threat of the nation’s $21.8 trillion overall debt and the $0.9 trillion budget deficit projected for 2018.

American corporations are also fretting about rising funding costs, corporate debt breaching $9 trillion this year, with a dangerous level of $2.83 trillion for the companies with the lowest investment-grade rating.

Use our head to head comparison tool to compare any two ETFs on a variety of criteria such as performance, AUM, trading volume and expenses.

Trade between the U.S., Canada and Mexico (i.e. North American countries) was salvaged at the 11th hour with the United States–Mexico–Canada Agreement (USMCA). As of October 1, and after more than a year of talks, the $1.2 trillion open-trade zone has a new deal that has been characterized as mostly cosmetic.

Having only a few material changes in the automotive industry, labor and environmental standards, the USMCA fails to deliver financially important reforms for the U.S. Under the new deal, automobiles must have 75% of their components manufactured in one of the three signing countries to qualify for zero tariffs, up from 62.6% under NAFTA. On labor, 40% to 45% of automobile parts must be built by workers who earn at least $16 per hour by 2023. On intellectual property, the deal extends the term of copyright from 50 to 75 years beyond the author’s life. The agreement has a “sunset” clause of 16 years, is subject to a review every six years and has to be ratified by all countries, which may prove difficult now with a Democrat majority in the U.S. House of Representatives.

Both the September revised U.S.–Korea deal and the USMCA are seemingly chess moves in the match against China, America’s largest trade partner. Last year’s $566 billion trade gap between the two nations did not shrink despite U.S. imposing tariffs on $250 billion worth of Chinese goods. In fact, the U.S. deficit with China soared to $106 billion in the third quarter, up 14%, while the January to October gap ballooned to $305 billion, an increase of 10% when compared to same period of 2017.

Technology has been in the driver’s seat for the last few years and 2018 was no exception. FAANGs took the market on a roller coaster, volatility spiked and investors sold popular companies in droves. Argentina and Turkey felt the sting of rising interest rates and economic reforms as funds returned to the U.S. in search of higher yields and safety. Commodities were also on the move, metals like aluminum and steel were the first on Trump’s tariff program and crude oil reacted to the U.S. decision to reinstate all Iran sanctions only to slide on soaring production and stockpiles. Yields in the U.S. crept upward, inducing panic on Wall Street for highly indebted companies. Trade wars were undoubtedly the origin of countless hazards in financial markets as the U.S. head of state embarked on a protectionist crusade.

Be sure to check our News section for the latest updates.