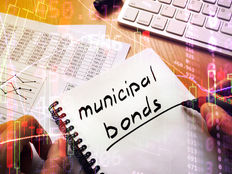 2019 was a strong year of performance for bonds, particularly fixed income ETFs, which saw notable interest during times of heavy volatility. The municipal bond market also made out well, hitting over the $400 billion mark.

“The municipal bond market eclipsed the $400 billion mark for the fourth time since 2010, thanks to taxable trend that led to a vault in fourth quarter volume,” a Bond Buyer report noted. “Municipal issuance picked up the pace in December to the tune of $40.79 billion, with taxable bonds accounting for about a quarter of the month’s supply. For the year, volume jumped 21.8% to $421.69 billion from $346.06 billion in 2018.”

Not only has it been a strong December, but also a strong decade for municipal debt—marked by stability, which has made them a prime alternative when considering safe haven assets.

“Muni credit has become increasingly stable as the decade progressed,” wrote John Hallacy in Bond Buyer. “Going back to the days of recalibration of ratings, the rating spectrum outstanding has contracted along with spreads. There are many more Aa/AA category ratings than ever before. Analysts use fine gradations to differentiate credits but at times those efforts are lost on the market.”

“The credits that depart from the norms become very well known in a relatively short period of time,” Hallacy added. “Resolution of these cases can take considerable time, expense and effort. We should be further along to closure on some of the issues revolving around Puerto Rico. There is still ample time for testing legal concepts within the proceedings. All parties have a different perspective on what constitutes fair settlements. We can only hope that resolution comes well before the end of the next decade.”