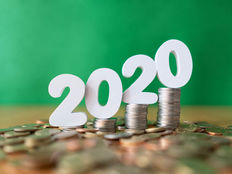 After 2019’s strong performance for stocks and bonds, expect both assets to put out a showing in 2020 that’s akin to a musical artist’s sophomore slump after a chart-topping debut album. Nuveen’s U.S. equity strategist Bob Doll recently predicted in a MarketWatch report that both stocks and bonds will gain “less than 5% for only the fourth time in 25 years.”

“We observe that stocks are not particularly cheap at this point, as prices rose considerably in 2019,” Doll wrote. “At the same time interest rates may rise modestly from low levels, which could cause bonds and cash to struggle. Should all this all play out, all three asset classes could return less than 5%, as happened in 2005, 2015 and 2018.”

“As a portfolio manager, I talk to CEOs all the time and their most common complaint is that they can’t find workers,” Doll said during a webcast unveiling his predictions. “If they need somebody they have to pluck them out of some other place and typically pay up for them.

Investors who want core exposure to both asset classes via ETFs can look to the heaviest of hitters like the SPDR S&P 500 ETF (SPY A) and the iShares Core U.S. Aggregate Bond ETF (AGG A).

For ETF investors, the SPY has been a staple fund for many years.

Since 2003, AGG has been the go-to fund for investors who want that core bond exposure, and with close to 20 years under its belt, the fund is still a great option.

Reasons to use AGG: