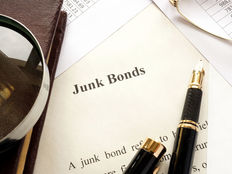 Wall Street is sounding the bell on the high yield debt market as investors’ appetite for yield is still strong, which is only fueled by low interest rates and in some parts of the world, negative interest rates. As the economy in the U.S keeps showing positive data like the record-low unemployment rate, this could keep fueling a risk-on sentiment in the corporate world–a green light for more debt.

“We think risks are elevated. We are concerned about the level of corporate profits,” said Collin Martin, a fixed income strategist at Charles Schwab. “We think too many people are reaching for yield.”

Debt accumulation in the corporate world has been warranted, however. According to a CNBC report, “the past decade-plus have been in a race for yield as the Federal Reserve has kept benchmark rates low and as borrowing costs for corporates, even at the lowest end of the credit spectrum, remain cheap. The ICE BofAML High Yield Master II effective yield is around 5.3%, near the lowest its been for the entire recovery cycle and well off the most recent high near 10% in February 2016.”

While low yields might be a detractor for investors, it’s a boon for corporations looking to rack up debt on the cheap. Record low interest rates have allowed companies to refinance existing debt for those with lower interest rates and the cycle continues in this current low-yield environment.

“A lot of the financial institutions are taking advantage and just refinancing and refinancing,” Martin said.

This, apparently, isn’t stopping investors who are snatching up this risky debt via high yield bonds.

“It’s a risk, but no one cares,” Martin said. “People are buying everything.”

Quenching the Thirst for Yield with “HYLD”

Global yields being at these basement low levels is generating interest in high-yield options like the High Yield ETF (HYLD A-).

HYLD provides exposure to a high income investment strategy that selects a focused portfolio of high yield securities. Utilizing a value-based, active credit approach to the markets, HYLD primarily focuses on the secondary market where there is less competition and more opportunities for capital gains.

The Portfolio Manager relies on their own fundamental credit analysis with an emphasis on a company’s ability to pay back their debts with free cash flow. HYLD seeks to provide high income and diversification benefits to the income portion of a portfolio.