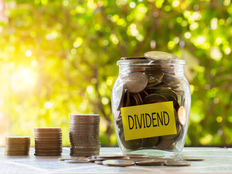 ETF Trends’ CEO Tom Lydon discusses the SPDR S&P Dividend ETF (SDY A) on this week’s ETF of the Week podcast with Chuck Jaffe of the MoneyLife Show.

Lydon explains that dividends have become a popular choice for advisors and investors, particularly within the S&P 500, as inflation remains high and Fed tightening has resulted in a cumulative 0.75% interest rate increase so far this year.

“Inflation and rising interest rates are difficult on growth stocks. The makeup of the S&P 500 is not what it was ten years ago,” Lydon says. Today’s index has “way more technology, very heavy in the FAANG area, and people have been noticing what’s happened to FAANG stocks so far this year, drastically underperforming the S&P 500 even though they’ve had a heavyweight.”

SDY has been a popular choice for advisors and investors in a market where many are seeking refuge in dividends and is weighted heavily towards sectors such as energy, consumer staples, utilities, and financials. Last week the fund brought in nearly $2.5 billion in flows.

“When you diversify into other areas, especially areas like energy, commodities have been the only positive area of the market not only in the last year but especially year-to-date, and it doesn’t seem that energy or commodities, in general, are going to pull back anytime soon,” Lydon says.

The price-to-earnings ratio of SDY is also attractive, at around 16.5 compared to the 20 P/E of the S&P 500. It’s a combined opportunity for advisors and investors to capture a 20% discount while also reaping the benefits of dividends.

How and Why to Allocate to SDY

SDY is a fund that pulls from what was formerly the fixed income portion of a traditional 60/40 portfolio; advisors have increasingly moved away from the 60/40 split as bonds have suffered and instead are allocating to cash and funds such as SDY that provide dividends.

“However, most investors tend to be buy-and-hold investors, and they tend to want to diversify, hence their desire to buy ETFs, but back to our point, the S&P is not the S&P that it was ten years ago. If you’re looking to further diversify into areas like dividends, or like utilities, or energy companies, or consumer staples, this is a great opportunity,” Lydon says.

Many advisors and investors have high correlations to the S&P 500 and technology stocks, and SDY offers a chance to pull back somewhat from that correlation and allocate instead to sectors such as energy or utilities. SDY is a well-established fund that is oriented around the S&P 500 without taking on the greater risks that some dividend ETFs do in search of high yields.

“This ETF tends to be a little bit more diversified, and most importantly, if you like the S&P 500, you’re also going to like SDY,” Lydon says.