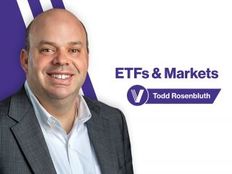 To celebrate the 20th anniversary of the first bond ETFs, investors flocked to the asset class, pouring in $28 billion in July, double the amount that flowed into equity ETFs during a strong month for the U.S. stock market. Demand was widespread, with 46 products gathering at least $100 million last month. While two credit-risk-averse bond ETFs, the iShares U.S. Treasury ETF (GOVT A) and the iShares 20+ Year Treasury Bond ETF (TLT B+), led the charge with a combined $8.5 billion of net inflows, we are particularly pleased to see many high yield ETFs also gain traction.

In mid-July, we highlighted a survey that VettaFi conducted with advisors during a webcast with State Street Global Advisors where high yield credit/senior loans were the bond investment style most appealing to add to client portfolios, ahead of ultra-short bonds, investment-grade credit, long-term Treasuries, and municipal bonds. Both the poll and the article occurred before the Federal Reserve hiked interest rates by 75 basis points in late July and Chair Powell said the U.S. was not in a recession. During July, the yield on the 10-year Treasury note narrowed by 33 basis points to 2.64%, and investors were willing to take on credit risk to receive higher yields. Indeed, six large high yield corporate bond ETFs managing $44 billion pulled in $5.2 billion in July alone.

The iShares iBoxx $ High Yield Corporate Bond ETF (HYG B+) received $1.9 billion of new money in July, shrinking its year-to-date net outflows to $4.6 billion and pushing its asset base back to $15 billion. Demand was also strong for the SPDR Bloomberg High Yield Bond ETF (JNK A-) and the iShares Broad USD High Yield Corporate Bond ETF (USHY A), which gathered $1.7 billion and $1.1 billion, respectively. USHY remained modestly larger than JNK with $8.1 billion in assets ($8.0 billion for JNK). Among the three largest high yield ETFs, USHY has the lowest expense ratio at 0.15%.

USHY also has the same fee as the Xtrackers UDS High Yield Corporate Bond ETF (HYLB A-), which gathered $411 million in July to narrow its year-to-date loss to $1.9 billion and push its asset base back to $4.1 billion. Despite an identical expense ratio, HYLB lost approximately 40 basis points less than USHY in the first seven months, as the two funds’ holdings are not the same.

While the Fed aggressively hiked rates, bond yields fell and investors preferred the high yield bond ETFs with intermediate levels of interest risk over those funds that offered more protection against rising rates. The SPDR Bloomberg Short Term High Yield Bond ETF (SJNK A), which has an average duration of 2.3 years, nearly half that of JNK, experienced net inflows of only $209 million in July. Meanwhile, the iShares 0-5 Year High Yield Corporate Bond ETF (SHYG A), which has a duration of 2.5 years, had $115 million of net outflows in July.

Yet, the flows for SJNK and SHYG were significantly stronger than those of some of the previously popular ultra-short bond ETFs, even as the sub-category was cited by advisors as being second-most appealing during the aforementioned VettaFi July webcast. In July, the SPDR Bloomberg 1-3 Month T-Bill ETF (BIL B+) and the iShares Short Treasury ETF (SHV B+) had net outflows of $2.3 billion and $1.7 billion, respectively.

It is exciting to see investors use the liquidity ETFs offer to rotate rather than retreat from the bond asset category even as the Fed takes action and bond yields fall.